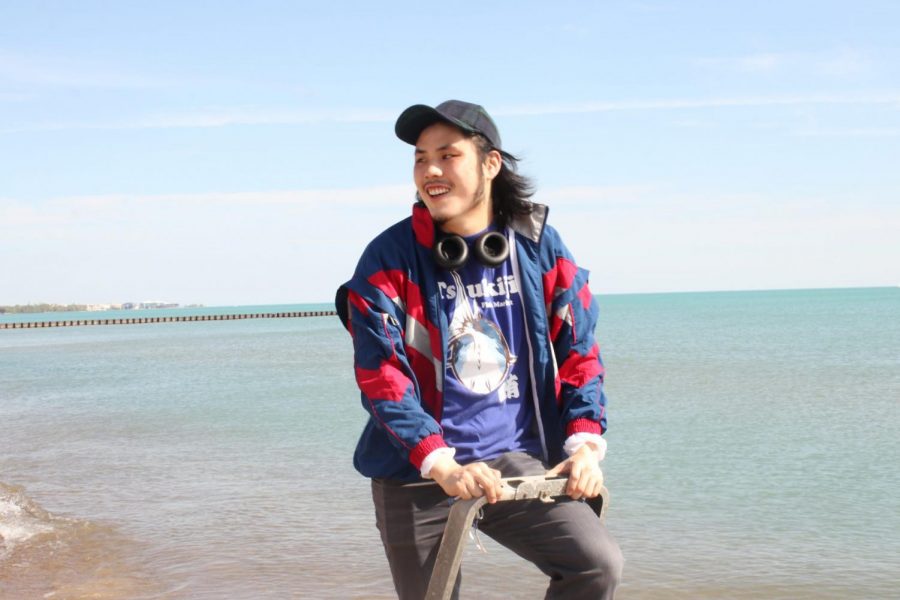 “Face Me” is an experimental film created and directed by DePaul alum Ty Yamamoto. The film uses a montage of projected visuals to explore Hollywood’s dark history of casting non-Asian actors to play Asian roles.

I sat down with the 2020 graduate to talk about “Face Me,” the CineYouth Film Festival (all films are available to stream here until May 13) and advice for current DePaul filmmakers.

Q: How did you come up with the title of the film?

A: I really wanted this video to feel like a call to action in some ways, and “Face Me” sounds very much like a command. Once I typed it out, it just felt right, and I stuck with it.

Q: Can you tell me a little bit about the inspiration behind the concept of “Face Me”?

A: I was in an experimental film class during winter quarter last year, right before the shutdown. I was feeling really frustrated, specifically because Covid was just starting to break out back then and there were all these reports of different Asian Americans getting attacked around the country.

I had this pent-up energy, and I didn’t really know how to put it into my work. I came up with the concept really quickly while sitting in class. I knew I wanted to use old footage and repurpose it from all these movies that depicted white people as Asian people. It was definitely something I’d been sitting on for a long time, but the actual creation process was super quick.

A: I actually haven’t thought about it since, but it was a very angry process; it was a lot of anger.

The main thing I wanted to emphasize was that [yellowface is] not something that has really stopped. I tried to pull a couple [of clips] from each decade. I didn’t want it to feel like this was something that’s from a long time ago. I wanted to make sure that there were some more contemporary examples, which are obviously a little bit harder to find, but they still exist and it’s still worth talking about.

It was a very upsetting process in some ways. I have seen a lot of these things growing up or in the media, but to see it all in one list and all at once was pretty intense.

Q: In contrast to these negative depictions and the yellowface, are there any positive representations of Asian Americans in film or great casting choices that you want to shout out?

A: My opinions on representation are pretty complicated, but I was very happy at the time when movies like “Crazy Rich Asians” came out to at least see Asians in blockbuster roles. It was a big moment for sure, and to see that spawn so many new projects made me very happy.

There was a movie from the early 2000s called “Saving Face” that I really liked that I feel like not that people have seen. With the Oscars this year, there were some high-profile names – “Minari” was a big one, “Nomadland,” which was directed by Chinese American director Chloe Zhao. It is nice to see more Asian-Americans entering the mainstream film conversation.

It’s just important for us not to end it at just East Asians. It’s not just Korean, Chinese and Japanese; it’s also South Asian and all these other communities that don’t get represented that need to be.

It’s very easy to see the conversation as being over just because we have seen a huge amount of Asians in the media lately. There’s a lot more that has to be done, especially which Asians are being represented — which ethnicities and how they’re being represented.

Q: The category that your film is in is called “The Cinemas of Chicago.” The description says that these films portray what the future holds for Chicago cinema. What’s next for you as a filmmaker — any current projects you’re working on?

A:I’m really happy to be a part of this category. I’m not from here originally, but Chicago really has become my home, especially as an artist.

I do film work primarily, but I am kind of all over the place. I do a lot of drawing. I had some of my art showcased at a coffee shop earlier this year. I also have ongoing origami classes that I teach.

Currently, I am working on a music video for a friend and later this year I will be shooting a short horror movie. [I am] very excited to go out and get back into filmmaking after film and the world was on pause this past year.

A: Experimental film is super important to me. I work on a mix of narrative and experimental projects, but experimental. I feel like it’s where my heart is and I try to bring it to my narrative work.

Film can be super rigid with roles. You have an editor, cinematographer, director, etc. and everybody is doing their part, which I love. But with experimental [film], I feel like I can really control every aspect of what I’m doing. And even if it’s on a smaller scale, just out of necessity, I feel like I’m able to convey things more clearly or at least how I want to do it.

Experimental film can be a lot of things. It can be collaborative, it can be more of an endeavor, more of a crew. But for me it’s a very personal thing where usually I have a concept, I take some footage of whatever I’m able to get and then I put it together in a way that means something to me, usually with some kind of message behind it.

Q:Is there anything else that you want to mention?

A: Anyone at DePaul who is studying film, I cannot emphasize enough: Use the resources that you have. Everything that I’ve gotten since graduating has been from all those amazing people I met, from the connections I made and even from the projects that I’ve done.

I said before that “Face Me” was just a class project, essentially, even though it’s a lot more than that now. Most of the gigs that I’ve gotten since graduating have been people coming across the film and saying that they liked it and they wanted me to work on projects with them.

You never know what’s going to come next, and even though the pandemic is still going on, there’s so much that you can do.

Again, [for] “Face Me,” I did utilize some of the school resources, but I shot it on camera that I’ve got right here. I didn’t use anything fancy; it was all in one room with a projector and some friends.

So really, just go for it. Do whatever you want to do, especially for people who feel like their voices aren’t being heard or you’re not getting the opportunities you should. Just go out and do something, even if it’s just for yourself, it’s something.