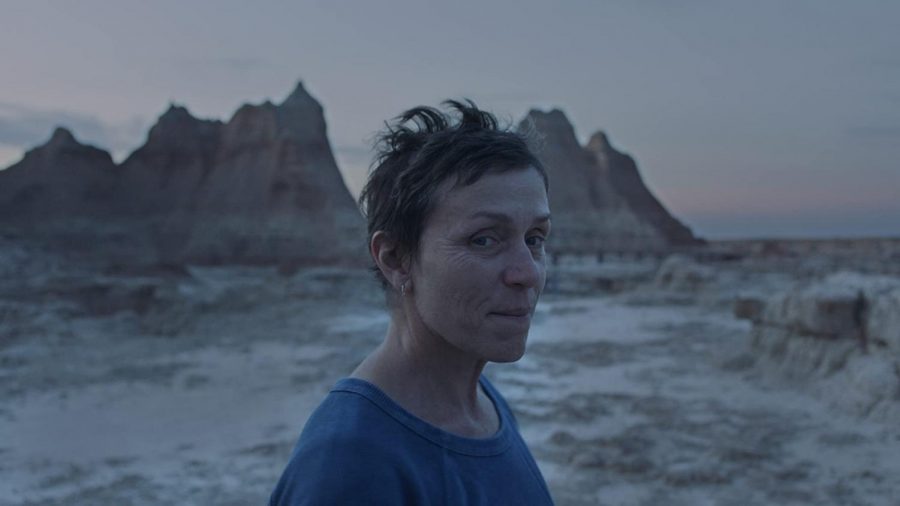 Over the course of the 2020-2021 award season, “Nomadland” racked up over 100 film awards including, most recently, the Academy Award for best actress, best picture and best director. Hence, it is recognized as one of the greatest films this year.

With the abundance of positive reviews and the recent critical acclaim it received, “Nomadland” gained the attention of thousands of people across the globe. This begs the question — what makes “Nomadland” so special?

Based on the nonfiction book of the same name, “Nomadland” blends documentary and independent filmmaking to create a compelling fictional story. What makes this film fascinating to watch is that aside from a handful of seasoned actors,  “Nomadland” used real people to play fictionalized versions of themselves.

“Nomadland” is a character-driven story about the phenomenon of older Americans taking on a nomadic lifestyle as a result of the 2008 Great Recession. Chloe Zhao, writer, director and editor, has a knack for using nonfiction stories and their participants as a source of inspiration for her films.

According to CNN Style, prior to writing the screenplay for “Nomadland,” Zhao embarked on a road trip of her very own to connect with real-life nomads like Linda May, Charlene Swankie and van-dwelling guru Bob Wells, all of whom starred in the film.  Zhao’s script evolved with the nomads and workers cast and hired for roles in the movie.

“She really dives into people, interviews them and gets to know who they are,” said James Choi, a film professor at DePaul’s School of Cinematic Arts. “If you really dig into people, there’s a lot of compelling elements to each individual.”

Zhao is not the first director to use non-professional actors in her films; in fact, this tactic is often used as a storytelling device in social-realist cinema to bring to life issues being portrayed in the film.

“The Florida Project” (2017), a tale of poverty juxtaposed with childhood fantasy, is a recent example of another film using non-actors to convey a sense of authenticity to a story. Director Sean Baker and his collaborators used Instagram, Target — yes, the retail store — and motels to find the cast.

Though “The Florida Project” was well-received among critics, it was only nominated for one Oscar — best supporting actor.

In contrast, the success of “Nomadland” can be accredited to two things. First, it had the advantage of award-winning actress Francis McDormand playing the lead role. Second, Zhao’s dedication to portraying a truthful account of life on the road imbued the film with a sense of authenticity.

Over the course of the four-month filming period, members of the cast and crew — including McDormand and Zhao — lived out of vans, just like characters in the film.

“That alone tells me that this particular filmmaker had felt a sense of responsibility to the fact that the story she was telling was based on real people’s lives,” said Susanne Suffredin, professor of documentary film at DePaul University. “She recognized that that mattered.”

Suffredin feels as though documentary films can easily be skewed to fit a filmmaker’s agenda making subjects of the film incredibly easy to exploit.

“At their core, [documentaries are] films, and films are about connecting emotionally,” she said. “Where it gets trickier with documentary is, how are you eliciting that emotion?”

With “Nomadland,” you don’t get the feeling of exploitation — but then again, it’s not really a documentary film; it just has documentarian characteristics.

“I don’t have the guts to make documentaries,” Zhao said in an interview with CNN. “I find the best way to convey truth is through poetry.”

“At one time, we kept all of these modes of filmmaking very separate from each other,” Suffredin said. “This idea of sort of blending kinds of filmmaking is a lot more accepted today than it probably was even 15 years ago.”

The blending of genres, in general, is much more accepted today than it was in the past. “Nomadland” reimagines the traditional Western genre combining it with entirely unique themes that make for a more character-driven, emotional experience.

“[Zhao] is a filmmaker who does not follow typical traditional Hollywood patterns,” said Jessica King, professor of screenwriting and cinema production at DePaul University. “She takes these mythical genres that are all about like individuality, and, you know, conquering and extraction and power and finding yourself and freedom — and she completely turns them on their head.”

Zhao has done something incredible with “Nomadland”; she’s brought a new way of storytelling into the mainstream. Whether consciously or unconsciously, audiences have recognized these themes and connected with them.

“Aside from sort of the hook around using non-actors and sort of her unique style of filmmaking, I think [“Nomadland”] definitely is a film of our time,” Choi said. “Feeling displaced, feelings of change, thematically, there’s just so many things in there that people definitely connect to.”