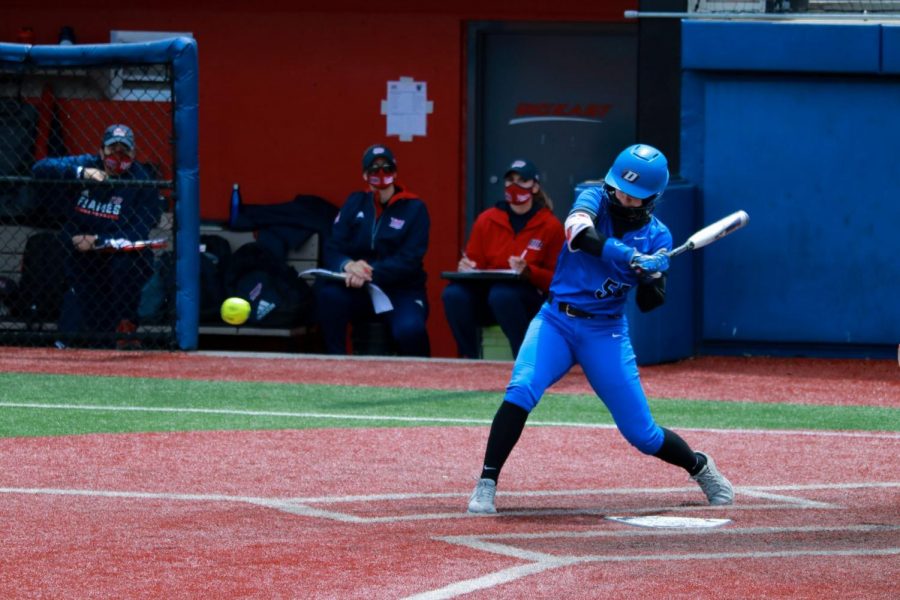 DePaul senior outfielder Angela Scalzitti prepares to hit the ball against UIC at Cacciatore Stadium on Saturday. The Blue Demons won all three games in the series.

The DePaul Blue Demons softball team capped off Senior Day weekend in style by sweeping a three-game set against UIC.

With the sweep, DePaul not only sent off their seniors in style, but were also crowned the Big East regular season champions in the process.

The festivities kicked off in the opener on Friday with a 4-3 win that included some late inning heroics by DePaul’s seniors.

Both teams traded runs in the first and third innings. The score remained tied after seven so they went into extra innings.

Down by one with two outs in the bottom of the 10th, Kate Polucha was hit by a pitch. Senior Jessica Cothern singled to right center, which allowed Polucha to reach third. Cothern ended up at second with some heads-up baserunning.

UIC intentionally walked Brooke Johnson to get to Tori Meyer. Meyer made the Flames pay as she singled to left field for her second RBI of the game, scoring Polucha.

In the 11th, with one away, senior Pearl Barroso lined a single to left. She advanced to second after Maranda Gutierrez was hit by a pitch.

Up stepped Grace Frazier with a chance to be a hero.

A hero she was as she singled to left, just out of the reach of the leaping UIC shortstop, to knock in pinch-runner Nicole Sullivan and walk the game off.

On Saturday, before the first game of a doubleheader, DePaul honored its four seniors: Barroso, Cothern, Krista Dalgarn and Angela Scalzitti. All four, in one way or another, played significant roles in both games.

UIC jumped out to an early lead, plating a run in the first inning. The Flames would hold on to that lead until DePaul’s bats woke up.

Barroso led off the bottom of the fifth with a walk before being replaced by pinch-runner Erin Hocker. She moved to second base on Frazier’s sacrifice bunt and came around to score after Scalzitti’s shot up the middle caromed off the pitcher and ended up in center field.

The line kept moving as Polucha walked to put runners on first and second. Cothern put the exclamation point on a four-run inning as she belted a three-run home run to center to break the deadlock and give DePaul a 4-1 lead and, ultimately, the win.

Dalgarn threw seven innings of one-run baseball and picked up her 13th win of the season.

As opposed to the previous games, the second game of the doubleheader was more by the numbers for the Blue Demons, as they completed the sweep with a 4-0 victory.

DePaul got out to a quick lead in the first inning with the seniors, again, front and center.

Scalzitti singled to start things off and stole second after the UIC catcher was unable to handle a pitch. She came around to score after Polucha split the gap in right center for an RBI double. Two pitches later, Cothern smoked an RBI single up the middle to knock in Polucha to give DePaul a 2-0 lead.

In the bottom of the fourth, Barroso launched a no-doubter over the left field wall to make it a 3-0 game. The Blue Demons then pulled out some two-out magic as Polucha’s second RBI of the game drove in Frazier to make it a 4-0 lead.

Julyana Gomez struck out the last batter of the game to put a bow on a perfect weekend for DePaul. She threw a complete game shutout for her third win of the season, striking out two and scattering four hits.

Not only did DePaul complete the sweep and claim bragging rights over their city rivals, but they closed out the season on a nine-game winning streak.

More importantly, however, the Blue Demons were crowned the Big East regular season champions for the seventh time in program history — their first since 2018.

The series sweep against UIC meant DePaul finished out the regular season with a 25-9 record, 13-1 in conference play. It also saw them go undefeated, 10-0, at Cacciatore Stadium. They definitely made the most of their home-field advantage.

DePaul’s next challenge will be the Big East Tournament, in which they will be the No. 1 seed.

“We’re excited for the upcoming Big East Tournament,” said head coach Tracie Adix-Zins in a statement to DePaul Athletics. “It’s going to be a challenge since we have already played each team three times, but we’re ready to go and know if we play our softball we’ll put ourselves in a good position.”

The tournament is set to kick off on May 13 in Storrs, Connecticut with DePaul taking on No. 4 Butler.