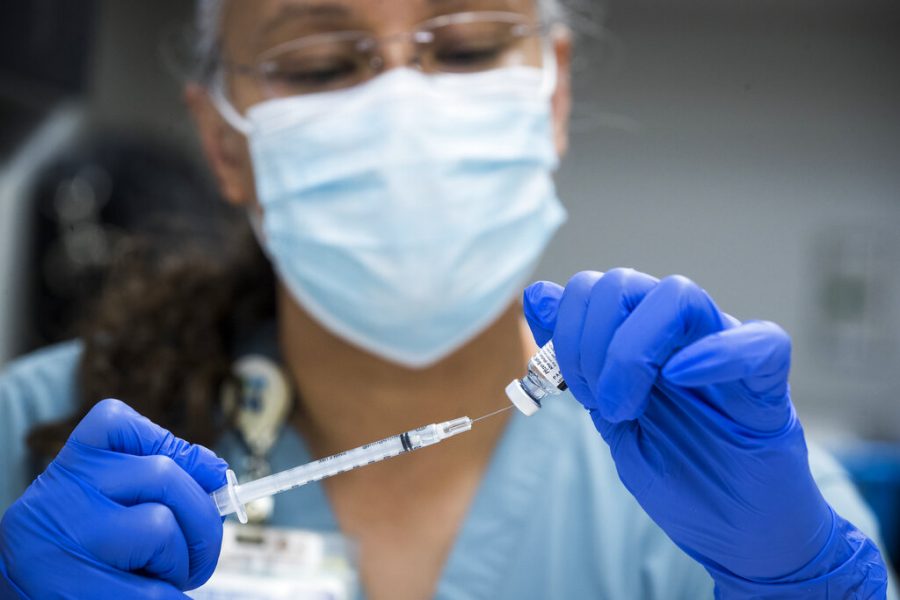 FILE - In this Thursday, Feb. 11, 2021 file photo, pharmacy technician Sochi Evans fills a syringe with a Pfizer-BioNTech COVID-19 vaccine at Texas Southern University in Houston. Coronavirus cases are continuing to decline in the U.S. after a winter surge. Researchers at Johns Hopkins University say the seven-day average of new coronavirus cases in the country dropped below 100,000 on Friday, Feb. 12 for the first time since November 4. (Brett Coomer/Houston Chronicle via AP, File)

Dr. Allison Arwady, commissioner of the Chicago Department of Public Health (CDPH), discussed the city’s progress against fighting the Covid-19 pandemic in a press conference with local student media Wednesday.

Arwady stated that one of the city’s top concerns is increasing the number of young adults receiving vaccinations as university’s prepare to incorporate more in-person learning.

“We’re concerned, especially where we’re thinking about students who are at colleges, at universities — especially if there are people who are living on-campus and in close settings — but even if you’re not, there’s obviously a lot of opportunity for the potential of Covid to spread,” she said.

In discussing local universities resuming in-person learning for the upcoming academic year, Arwady said that CDPH cannot force universities to implement vaccine mandates, but sees them as a viable tool to reduce the spread of Covid-19 on campuses.

“[Vaccine mandates] certainly [are] something that I am supportive of, given that we have seen — particularly in congregate living settings like dormitories — we have seen a lot of potential for Covid spread and have had to use a lot of public health resources in universities to help try and control Covid,” she said. “… the Chicago Department of Public Health is never going to say, you know, ‘you must be vaccinated,’ but we know that institutions will make those decisions.”

She went on to say that she predicts universities will likely implement more testing in order to help reduce the spread of the virus on campus.

“I do think what we’ll see is probably a combination — not just in colleges and universities, but more broadly — I think we’ll probably see a combination of vaccination and even more testing coming into play,” she said.  “So I could imagine settings where if people are not vaccinated, there may be more testing required, particularly if people are going to be living in the dorm.”

Arwady said another primary concern is increasing vaccination rates among the city’s Black and Latinx communities, both of which have been disproportionately impacted by the pandemic.

“Right from the very beginning, we saw that Covid hit predominantly Black Chicago neighborhoods hardest at first,” she said. “And throughout this whole pandemic, we’ve seen the most severe outcomes among Black Chicagoans, meaning the most hospitalizations and the most deaths. We’ve seen the most cases diagnosed among Latinx Chicagoans … And now that we’re in full vaccine mode, we are seeing less vaccine uptake among those harder-hit communities by race and ethnicity.”

Arwady said that CDPH is hoping to dispel misinformation about the vaccine spread on social media to increase vaccination rates among young people in the city’s Black and Latinx communities, who are receiving vaccines at a lower rate. According to Arwady, “more than half” of both white and Asian Chicagoans between the ages of 18-29 have received at least their first dose of the vaccine, with Black and Latinx Chicagoans of the same age range showing lower percentages of 39 and 15, respectively.

“We are very interested and thinking about ways to reach out not just to younger Chicagoans, but younger Black and Latinx Chicagoans around increasing that confidence and really thinking about, you know, what can we do to improve some of those vaccination rates,” she said.  “…We’re seeing more and more, our Covid cases, hospitalizations and deaths here in Chicago being concentrated in the neighborhoods that are the least vaccinated … Over the last couple of weeks, by far,  most new cases have been on the far south sides, which is some of our very least vaccinated areas.”

Arwady added that “more available and inexpensive testing,” alongside continuing vaccinations will be key components of diminishing spread of the virus, and that conversations around mask mandates are “very much ongoing.”

“I think we’re going to see that be a part of long-term Covid control along with vaccination, and then kind of a plus/minus on masks, I think depending where we are, you know, as a community and what’s happening with variants,” she said.

Mask mandates have been a point of discussion and contention throughout the pandemic, with the Center for Disease Control and Prevention (CDC) announcing eased indoor mask guidelines for vaccinated people on Thursday. In a previous Facebook Live session, Arwady said that the city would potentially discuss mask mandates in a “number of months,” depending on vaccination rates.

The conversation around potentially loosening mask restrictions coincides with Mayor Lori Lightfoot’s recent declaration that the city is on track to “fully reopen” by July 4, with the goal of eliminating all capacity restrictions on businesses.

“At the moment I’d say we are at a point where we’re broadly moving towards some pretty significant reopening,” Arwady said.  ‘We’re at a point now different from earlier in the pandemic where we don’t have a concern right now that the healthcare system is going to be overwhelmed … With this more recent increase that we’ve seen, it’s been much more tempered because we’re seeing the effects of [the] vaccine on there.”

When asked how a potential surge in cases or variants of the virus will impact the planned reopening, she stated that all vaccines used in the city offer protection against all known variants.

“I don’t foresee a variant emerging really in the next couple of months that for which [vaccinated people would not be protected],” she said. “That said, when we look over the next year, I think it is possible.”

According to CDPH data, approximately 36.16 percent of the city’s population is fully vaccinated, with over 4 million Chicagoans having received completed doses.