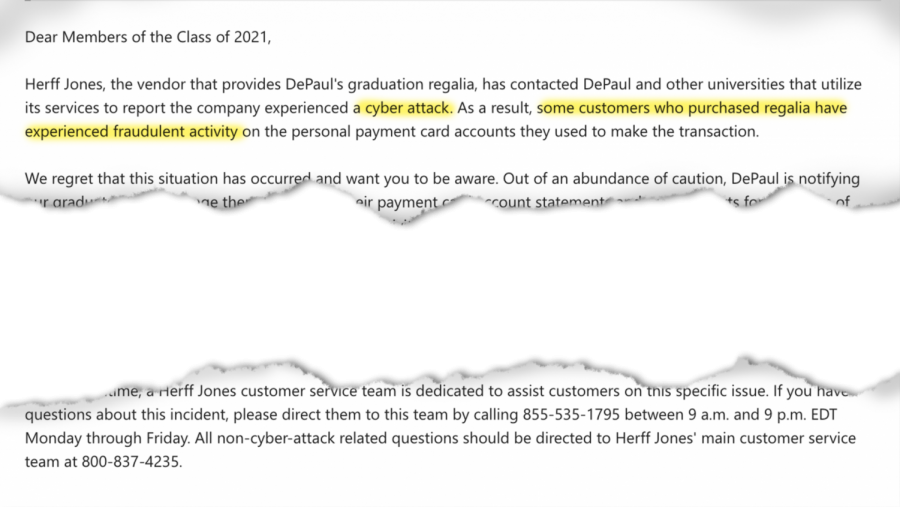 On May 13, DePaul’s book stores sent an email to graduating seniors informing them that Herff Jones — the vendor that provides DePaul’s graduation regalia — experienced a cyber attack, and as a result, some students’ bank information may be compromised.

“I went and checked my account that I had used to buy my regalia and found two separate fraudulent purchases adding up to almost $500 spanning May 11-13,” graduating senior Elizabeth Becker said. “I had a bad feeling when buying my regalia — which I thought it was weird in the first place that we still had to buy our own regalia during a pandemic — because the site seemed really sketchy and not well-made. I’m so lucky that I paid my bills a few days ago because otherwise I’d be completely screwed over on top of everything else.”

“… It is so inconvenient as a graduating senior to get locked out of my bank account for a week all because of DePaul and their actions regarding regalia,” Becker added.

Becker and other DePaul seniors noticed fraudulent purchases made from their bank accounts after paying Herff Jones for graduation regalia, with charges ranging from as low as a few dollars to upwards of $500.

Prior to the data breach, students expressed concern with the graduation cap and gown vendor and their customer service team.

“I initially ordered my regalia around March 15, including an international stole that was never delivered, though I was charged around $30 for it,” said graduating senior Deyana Atanasova. “I contacted customer service multiple times, was on hold for over 50 minutes, and got an email that it would be resolved over — but it wasn’t since they sent another generic stole, clearly ignoring my explicit requests.”

“This was frustrating in itself, but then my roommate mentioned the whole fraud situation on May 7,” Atanasova added. “I checked my Chase account information and noticed seven fraudulent charges occurring on May 7 and one on May 8. So, all in all, definitely a stressful experience and I’m truly not expecting any response or redemption from Herff Jones considering my experiences with their customer service.”

Many of the affected seniors expressed how stressful the data breach was, as some students already have lower incomes, not to mention upcoming graduation in midst of the ongoing pandemic. DePaul senior Sophie Harriss was paying for groceries when her card declined.

“It was also embarrassing … but now it’s mostly just upsetting that it wasn’t something I could have necessarily avoided,” Harriss said.

Herff Jones services schools nationwide, and the data breach has also jeopardized the information of students across the country. Students from various universities have reported similar accounts of fraudulent charges after purchasing the company’s graduation regalia. Other Illinois schools also recount instances of payment theft including the University of Illinois.

An investigation is currently underway led by a national consumer right law firm. According to the investigation website, students who incurred fraudulent charges may have their personal and banking information sold on the dark web.

According to the company’s website, “Herff Jones is one of the nation’s leading manufacturers of recognition, education and motivation products.” In addition to selling products to thousands of high schools and colleges, the company also works with churches, sports teams and corporations — most notably manufacturing championship rings for the Indianapolis 500, among other athletic conferences.

The Indiana-based company, which has operated for over 100 years, has faced criticism for high-cost graduation products and a lawsuit for selling class rings that did not contain the stated gold content.

DePaul spokespersons did not provide additional comment on the data breach situation and referred to the email sent to DePaul seniors. HerffJones did not respond to The DePaulia’s request for comment by time of publication.

“We regret that this situation has occurred and want you to be aware,” the email from DePaul book stores reads. “Out of an abundance of caution, DePaul is notifying our graduates to encourage them to monitor their payment card account statements and credit reports for instances of unauthorized activity. If any suspicious or unusual activity is discovered, please report it immediately to your financial institution, as major payment card companies have rules that restrict them from requiring payment for fraudulent charges that are promptly reported.”

Students who fell victim to the cyber security attack are encouraged to call the Herff Jones contact line dedicated to the nation wide data breach.

“I think stuff with bank information and important numbers is stressful regardless, but everything is 10 times harder to take care of because of Covid and now that I’m graduating finances are always on my mind and a stressor,” said DePaul senior Grace Ulch in a message to The DePaulia. “I know it was no fault of DePaul’s or anything, but I would think there would be a vetting process to ensure that a company they’re telling their students to give their information to is safe and trust worthy (sic).”