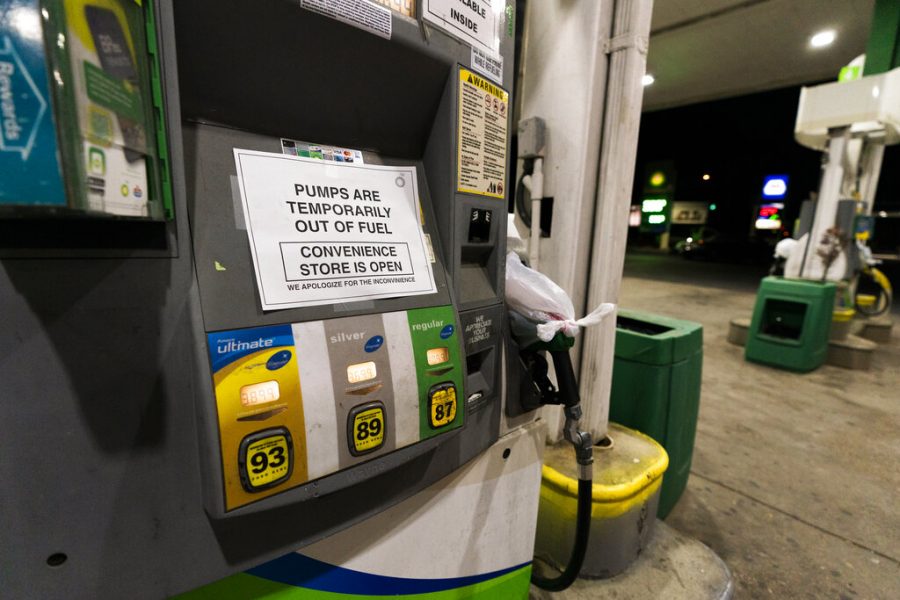 A pump at a gas station in Silver Spring, Md., is out of service, notifying customers they are out of fuel, Thursday, May 13, 2021. Motorists found gas pumps shrouded in plastic bags at tapped-out service stations across more than a dozen U.S. states Thursday while the operator of the nation's largest gasoline pipeline reported making "substantial progress" in resolving the computer hack-induced shutdown responsible for the empty tanks. (AP Photo/Manuel Balce Ceneta)

In the spring of 2020, Americans were going nowhere. Hunkered down in their abodes, the price of gas seemed inconsequential. Now, a year later, as travel begins to boom, residents of a reopening nation find themselves sighing about fuel costs again.

In downtown Chicago in 2021, from February 1 to May 10, average gas prices have increased from $3.27 to now $4.01 per gallon, according to Global Petrol Prices.

The rise shows no signs of stopping, as average gas prices increased nearly every week in 2021 — and that was before a cyberattack.

The shutdown led to panic buying, long lines and fuel outages at many East Coast gas stations this past week. Colonial restarted the pipeline on Wednesday, but the company warned that it could take several days for supplies to return to normal, according to the Charlotte Observer.

While Illinois isn’t experiencing fuel shortages right now, it does consistently rank amongst the top 10 most expensive states for gas prices. Part of this can be attributed to Illinois’ composite motor fuel tax, which adds $0.72 per gallon on regular gas, according to The Civic Federation.

For some small businesses that rely heavily on transportation, this recent gas price hike has hurt their bottom-line earnings.

Brothers Matt Benjamin and Cody Benjamin own Brothers Construction in Crystal Lake, Illinois. Their business specializes in independent contracting for roofing and siding repairs. Beyond completing repairs, their labor includes commuting to homes where they give out estimates and hauling materials to job sites using trailers.

Recently, the Benjamins have been frustrated with the rising fuel prices because it changes the costs of their services — potentially hurting their business.

“Gas prices are material costs, and we have to adjust our pricing to homeowners to help offset our expenses,” Matt Benjamin said. “When we raise prices, our customers may not want to spend the additional money which, in turn, potentially limits our business.”

Some businesses rely more heavily, or solely, on transportation as their means of revenue.

Mike Kent experiences a great deal of the effects of gasoline prices. He’s worked as a chauffeur for CHEAP Chauffeur in Cary, Illinois for 20 years. His biggest revenue source is driving suburban families to and from O’Hare International Airport when they travel.

Since CHEAP Chauffeur and Benjamin Brothers Construction are independently owned, they can easily adjust their prices and fares in order to offset expenses; however, for employees or contractors of larger businesses, the story is different.

According to Quartz, a global business news publication, Uber management does not factor in gas, car payment, insurance, car depreciation and maintenance into its calculated fares.

This means drivers who are independent contractors in Illinois, especially near campuses like DePaul where students often use Uber to commute between classes, see less take-home pay when other costs including gas prices increase.

While those affected most by increasing gasoline prices rely on transportation for their business to operate, it can be easy to ignore that any citizen who needs to travel to get around will in some way be negatively affected by rises in gas prices. Even those who travel minimally may see increases in goods and services they buy.

Even though many white-collar workers are still working from home, the nation reopening has caused an enthusiasm for travel, especially involving leisure..

A combination of the health risks, and in some instances, the required Covid-19 testing, and documentation involved with flying, may make the appeal of continental road trips greater. Coupled with the increase in fuel prices, it is a double-edged sword for leisure travelers right now.

Many people are looking for ways to save money at the pump. Those that drive for a living have found ways to seek out cheaper pricing.

“I use the GasBuddy app when I’m away from my known, cheapest gas station,” Kent said.

Google Map that shows the cheapest gas prices in each of 10 Chicagoland counties according to GasBuddy. The GasBuddy app provides drivers with posted gas prices that are up to date, as well as perks and discounts and certain gas stations.

Still, gas prices are up practically everywhere nationally and, the question is: Who or what is to blame for the hike in gas prices nationally?

Jon Hilkevitch, a former transportation reporter for the Chicago Tribune and Getting Around columnist, said that there are a multitude of factors that can contribute to rising fuel prices nationally.

“There are so many moving parts,” Hilkevitch said. “World events, hostilities, natural disasters and major political disputes all tend to have an impact on the stock market and the production of crude oil which is one of the leading factors in gas pricing.”

In September 2018, the U.S. passed Russia and Saudi Arabia as the largest crude oil producer in the world, according to the Washington Post. However, America has recently become increasingly dependent on crude oil, which is in short production globally.

Dependence on crude oil could have major ramifications soon in addition to other problems for gas stations. According to CNN Business, American gas stations might run out of gas this summer due to a shortage of fuel distributing tanker truck drivers.

In the midst of all of this, some are questioning whether gasoline should even be the fuel of the future.

The desire for crude oil for some climate activists and green-seeking companies, such as Amazon, Ford and Volkswagen, is diminishing as they look forward to the potential future of electric fuel.

“I think there is going to be a new normal,” Hilkevitch said. “Big business is making that switch to try to be as close to zero emissions as possible and those clinging on to fossil fuels, I think are going to be left behind.”