DePaul softball lose in first round of Big East Tournament 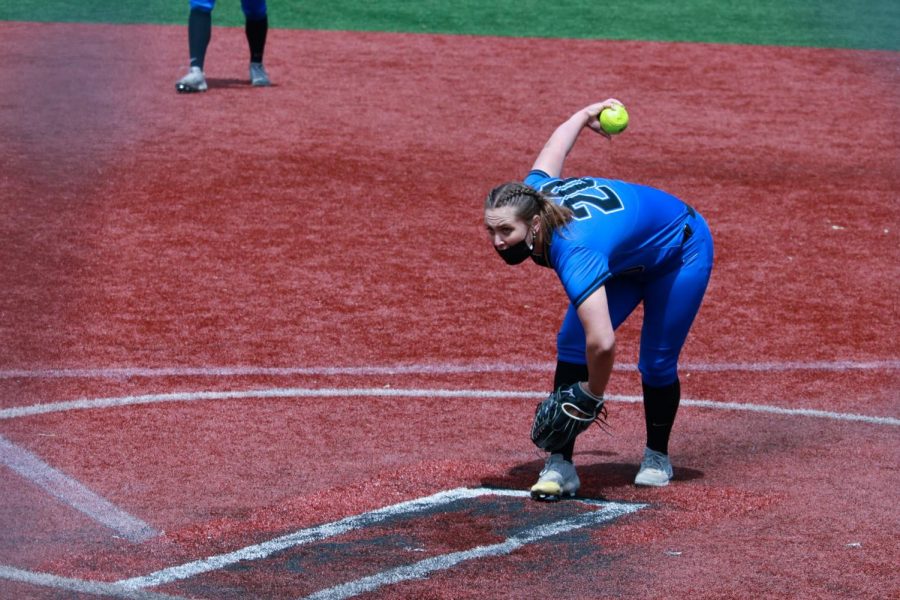 DePaul senior Krista Dalgarn gets ready to deliver a pitch against Butler on May 8. The Blue Demons swept the Bulldogs.

The DePaul women’s softball team went into the Big East Tournament as the No.1 seed and outright favorites. The Blue Demons were on a three-game winning streak before entering the tournament as defending champions.

But the Butler Bulldogs pulled off the upset in the opening game as DePaul crumbled to an 8-1 defeat.

The lone bright spot for the Blue Demons was in the first inning when catcher Jessica Cothern launched a home run to right center to give DePaul a 1-0 lead.

After that, it went downhill very quickly.

Cothern’s counterpart, Christina Candotti, responded immediately for Butler and homered to center off Natalie Halvorson to tie the game.

DePaul was not without their chances. In their half of the second inning, they had runners on second and third with two outs. Grace Frazier battled in her at-bat, fouling off a number of pitches before eventually lining out to left to end the threat.

In the third, the Blue Demons had the first two batters reach base after a walk to Angela Scalzitti and a bunt by Kate Polucha that was mishandled by the Butler pitcher Karli Ricketts. Once again, they failed to take advantage as Ricketts sat down the next three hitters in a row.

Ricketts was getting it done on both sides of the game, as she gave Butler the lead with a home run to right in the top of the fourth. All of the runs scored up to that point were courtesy of the long ball.

The top of the sixth proved to be the decider and an inning that DePaul would rather soon forget.

Krista Dalgarn had replaced Halvorson earlier in the game. She and Halvorson had been DePaul’s one-two punch all season.

However, Dalgarn, with a poor throw on a comebacker, allowed the batter to reach base. She then hit the next batter to put runners on first and second. Ricketts, already with a home run, bunted to move the runners over.

With runners on second and third, Mackenzie Griman pulled off the safety squeeze to knock in Butler’s third run. The Bulldogs weren’t done as Candotti, the next batter, bunted in another run. Back-to-back safety squeezes resulted in two runs.

Butler was playing small ball to perfection. In keeping with the theme of the first few innings, however, Madi Christiansen belted a three-run blast to put a bow on the proceedings.

When all was said and done in the sixth, Butler had batted around and scored six runs.

DePaul was unable to muster much of anything with their last six outs and lost as Ricketts finished off the complete game.

The offense for the Blue Demons picked a bad time to go cold, as they only had four hits in the game and stranded six runners. Anything that could go wrong ultimately did go wrong for the defending champion.

In the regular season, DePaul didn’t face many challenges leading to its seventh Big East regular season title. The Blue Demons posted a 13-1 conference record and secured the No. 1 seed in the Big East tournament.

The story, however, was different when the conference tournament began on Thursday. DePaul came into the tournament near the top in the Big East in various offensive categories: batting average, slugging percentage, on-base percentage, runs scored and total hits.

But the Blue Demons’ offense struggled in their first game against Butler, resulting in a 8-1 loss. With the new conference tournament format being double elimination, DePaul then had to face the loser of the UConn-Villanova game.

UConn took down Villanova, 4-3, after scoring the game-winning run in the seventh inning. DePaul and Villanova split the season series, 1-1, which is also the only time that the Blue Demons lost a conference game this season.

DePaul senior pitcher Krista Dalgarn, who struggled in the first game against Butler, gave up seven runs in the top of the seventh inning in game two against Villanova. After getting the first two outs, Dalgarn proceeded to walk the next two batters. The next Villanova batter managed to reach on an error, setting up a bases loaded situation.

Junior Megan Kern was the next hitter for the Wildcats. She launched the next pitch from Dalgarn out of the fence, giving Villanova a 6-1 lead. The next two batters hit singles to give the Wildcats two on base with two outs.

Junior Ryan Henry also took Dalgarn deep to give Villanova an eight-run lead heading into the final three outs of the game.

DePaul senior Angela Scalzitti singled with two outs, but she was left stranded on first base after senior Kate Polucha recorded the final out with a fly ball. The Blue Demons left a total of seven runners on base against Villanova.

Villanova took an early 1-0 lead before DePaul tied the game in the bottom of the first inning. DePaul had multiple opportunities to take a lead in the game before the Wildcats grabbed a 2-1 lead in the fifth inning.

The Wildcats went onto win the Big East Tournament over UConn on Saturday.

DePaul, on the other hand, will not be able to repeat as Big East Tournament champions after winning in 2017, 2018 and 2019. The Blue Demons finish their season with a 25-11 overall record and 13-3 in conference play.