Bullish on the Bears: 2021 Draft sparks optimism for the future 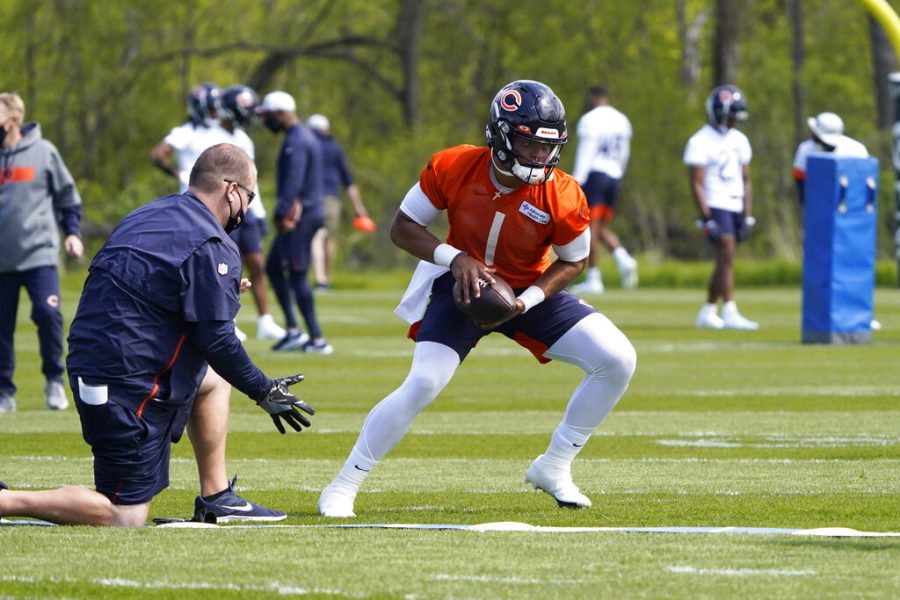 The thrills of draft night weren’t supposed to commence so early in Chicago. Then again, the NFL draft seldom goes as planned for Bears fans. Despite some difficult past trials, bold moves gave 2021 a glimmer of hope for a future of success for the Monsters of the Midway.

It wasn’t apparent until the Bears traded up from the 20th spot to the 11th that the state of Ohio , which held the draft, would also be the state where the franchise’s new face set numerous collegiate records.

Ohio State quarterback Justin Fields, a 2019 Heisman Trophy finalist, who led the Buckeyes to a 20-2 overall record and back-to-back College Football Playoff semifinal appearances in two seasons in Columbus, was snatched at the right moment by the Chicago Bears.

Adam Rittenberg, an ESPN college football reporter, believed that when the Denver Broncos left the highly touted quarterback on the table with the 9th overall pick, the Bears had to do all they could to land the huge prospect.

“It was absolutely the right moment to strike,” Rittenberg said. “What this team needs is an upgrade on offense, and they got potentially the guy at quarterback who can turn the franchise’s fortunes around.”

Some overzealous and quarterback-starved Bears fans felt that a post on Fields’ social media, showing him at a Cubs-Braves game in Atlanta just two days before the draft, was a sign that the Bears would be trading up for him, according to Heavy News. It turns out their premonition was right on the money.

The flurry of excitement around the idea of a potential franchise quarterback illustrates how much this city has wanted to see an impactful player reign at that position.

Fred Mitchell, a former award-winning sportswriter and columnist for The Chicago Tribune, said he feels that the Bears franchise has fallen flat in securing that role for far too long.

“The fact that some of the passing records are still held by Sid Luckman from the 1940s tells you that the Bears have not prioritized that position enough,” said Mitchell.

Consistency for the Bears’ signal callers has been almost nonexistent. Since 1993, the Bears have had 14 different starting quarterbacks while their bitter rival, the Green Bay Packers, have had just two.

Nick Moreano, a DePaul graduate student and editor-in-chief of The Chicago Audible, said that Justin Fields has the intangible assets that the last Bears quarterback lacked.

“It’s a guy that is proven, but what he brings is that ‘it’ factor,” Moreano said. “Pocket presence, ability to hit passes and explosive plays down the field were nonexistent in the Bears’ offense when [Mitchell] Trubisky was here.”

Chicago Bears management is certainly hoping this is the case. The last time that general manager Ryan Pace took a risk to trade up for a quarterback, his intuition was wrong, and the Bears lost a lot of potential future talent for a guy that couldn’t deliver.

“Certainly, Ryan Pace took a lot of abuse and rightfully so for giving up so much to get Mitch Trubisky a few years ago,” Mitchell said. “Also, to see a couple of young quarterbacks in that draft that the Bears passed up on do so well wasn’t good.”

The trade damage this year was similar to the 2017 draft. When Pace infamously traded up from the third spot to the second spot overall, the Bears gave up their third-round and fourth-round picks and their 2018 third-round pick.

For Fields, Pace gave up the fifth-round pick and the 2022 first-round and fourth-round picks. It only emphasizes the importance that history doesn’t repeat itself and Fields becomes the risk-turned-reward that Trubisky didn’t.

No matter how compelling and impactful a selection is, there is always more to the draft than the first round. The Fields pick was the first of many with great potential such as Oklahoma State offensive tackle Tevin Jenkins who was selected 39th overall in the second round.

“His nastiness and physical mentality can translate to this Bears offensive line,” Moreano said. “That’s a guy that I think should be out there starting week one.”

As the draft progressed forward, the Bears capitalized on an offense-focused draft plan.

Following the Jenkins pick, the Bears selected Missouri offensive tackle Larry Borom in the fifth round alongside Virginia Tech running back Khalil Herbert and North Carolina wide receiver Dazz Newsome in the sixth round to fill out the offense.

The Bears closed out the draft by adding Oregon cornerback Thomas Graham Jr., who Moreano said he thinks was a big steal, and BYU defensive tackle Khyiris Tonga to an already solid returning defensive squad.

“Their defense has been their strength yet towards the end of the season, they wear down because they’ve been on the field so much,” Mitchell said.

The balance of satisfying the glaring offensive needs while securing some late round potential on other areas like the defense left many satisfied with this draft.

“It’s the Bears that showed out in this division,” Moreano said. “It sounds really weird saying the Bears did a good job drafting and now we just have to see how it plays out.”

The apparent success with these selections is just a stepping stone for a franchise that still has big questions to answer in the remainder of the offseason. Pace reassured quarterback Andy Dalton that he will start despite the selection of Fields, according to CBS Sports.

This has some wondering what the game plan is moving forward at that key position and whether a Dalton-Fields offseason battle may ensue. Moreano, however, said he thinks head coach Matt Nagy is mimicking the move the Kansas City Chiefs made with Patrick Mahomes in 2017.

“I think Matt Nagy, who idolizes Andy Reid so much, is looking at that situation and thinking, well I can do that same thing for my young quarterback that we moved up to get,” Moreano said.

Pace, who many thought was heading into a make-or-break season regarding job security, may catch a break because of time needed to test their new offensive rookies.

With the NFL’s 17-game schedule released on May 12, it’s hard to predict how the Bears will fare in the upcoming season. What’s certain is that the Bears made aggressive moves to change the franchise’s future trajectory and fans seem to be enthusiastic about it for now.

Whether that optimism is crushed or warranted will be determined on the field. But Bears fans can at least be content with the logic behind their picks in 2021.

“The Bears were one of the big stories of the draft for the right reasons rather than the surprising ones,” Rittenberg said.