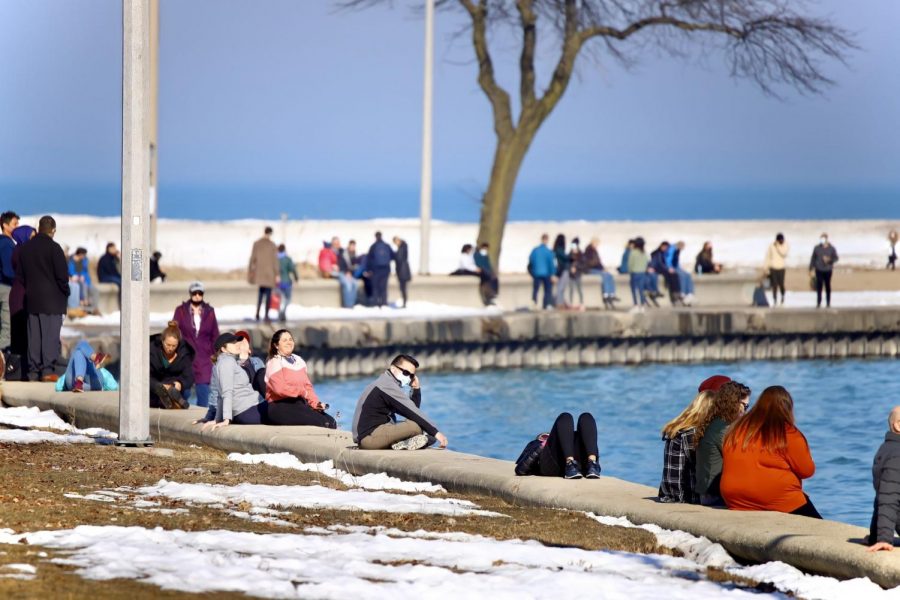 FILE-Residents out on the Lakefront Trail as temperatures reach 54 degrees in Chicago following weeks of bitter cold and heavy snowfall.

It’s the first warm day of the year and the park is empty.

DePaul freshman Camelia Verni-Patron sits on a blanket beside the North Branch  of the Chicago River, quietly looking out towards the opposite bank. The Metra whizzes by, and they wave, though no one is waving back. For Verni-Patron, there is solace in the outdoors; it’s a place to rejuvenate and recenter themself. It hasn’t always been this way though.

“Before the pandemic, I was just leaving high school,” Verni-Patron said. “It was my last semester of senior year. I was really scared of being alone. So I would go out in nature as a group activity, mostly just to get out of the house. It was an excursion instead of something I regularly did.”

Having lived in Chicago their whole life, it’s rare that nature ever comes to them. But a year ago, Verni-Patron, along with the rest of the world, retreated to the safety of the indoors. We isolated ourselves and narrowed the scope of our lives and in this narrowing, many DePaul  students rediscovered the simple joys of the outdoors.

In the first study of its kind, researchers in Vermont found that adults report walking 70 percent  more during the pandemic than before. Wildlife watching is up 64 percent and relaxing outside alone 58 percent. The study “suggests that nature may play an important role in coping during times of crisis.”

“I had a pretty okay relationship with nature. But it wasn’t something I would seek all the time,” said DePaul freshman Dale Cheney.

When the pandemic hit, her relationship with the outdoors shifted dramatically.

“It was an escape,” Cheney said. “I would try to go on walks by myself. Try and spend as much  time outside as possible.”

Cheney is a fast walker. When she gets a destination in mind nothing slows her down, aside from a cute cat. So when the sun is shining on clear blue days, nothing can dampen her mood.

A native of Indianapolis, Cheney always had a large yard growing up. She had wide shaded sidewalks and green space abound. Cheney now lives in a small and near-windowless Airbnb situated behind a vacant storefront in Roscoe Village.

“Now I like going outside when I’m going somewhere,”  Cheney said. “But I don’t seek out going to a park anymore. Just because I find more sanctuary inside.”

That’s the big question for the Vermont researchers: if the changes in values and behaviors during the pandemic are here to stay or not.

It might still be too early to tell. But for Verni-Patron, it isn’t. On nice days they wander up and down alleys, reclaiming unwanted furniture. Over half of all the furniture in their sunny Logan Square apartment has come from this new hobby, and they hope to carry these new habits into the post-Covid world.

“I’m always outside. It’s part of my mental well-being,” Verni-Patron said. “Now being inside is like a prison. It’s a privilege to be outside and walking around a park. It’s my favorite part of my day.”