Much of police brutality goes unnoticed 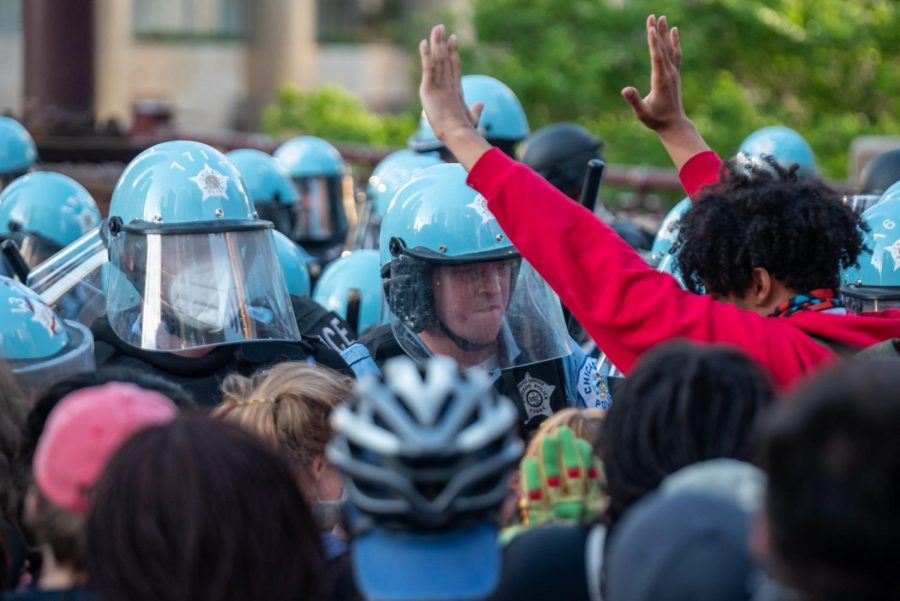 FILE-Officers attempt to block protesters, including one with their hands up.

George Floyd, Breonna Taylor, Adam Toledo and Daunte Wright are just some of the names of people of color that have fallen victim to police brutality. Their stories are known around the world — their names written down on signs as people march in the street for their justice.

Police brutality appears to be an epidemic. The rapid growth and spread of police violence has a long history. In a digital world, more people are opening up about the mistreatment they have faced at the hands of police.

Rabbi Michael Ben Yosef of the Chicago Activist Coalition, a diverse organization aimed at addressing injustice in Chicago, recounted his own experiences with the police in an interview with The DePaulia.

Yosef said that in his early 20s, he was stopped by Madison, Wisc. police in a south suburb. The encounter occurred before  police frequently used video and body cameras, and Yosef said he thought he was on the verge of being killed. His car had stalled, and he called upon police for assistance. To his surprise, officers immediately pulled their guns out on him, he said.

“If I had sneezed or I had coughed, or if I had done anything possible, I was a dead man,” Yosef said. “I was literally terrified.”

Yosef, a Black man, said he was profiled and it could have cost him his life. Those officers returned to work while that interaction will continue to linger in Yosef’s mind for the rest of his life.

Like many others that have been targeted by the police, Yosef’s story did not receive media coverage.

One New York University study found that Black drivers are 20 percent more likely to be stopped than white drivers, and once stopped, they were searched about 1.5 to 2 times as often as white drivers.

“The proximity of policing and the criminal justice system is so close in minority communities that if you walk out the door there will be a likelihood you’re just gonna come into contact with them,” said Xavier Perez, a professor of criminology at DePaul.

In an article written by a group of university professors, they determined that “African American men and women, American Indian/Alaska Native men and women, and Latino men face higher lifetime risk of being killed by police than do their white peers.”

With that, for young men of color, one of the leading causes of death is the use of police force.

Many stories seem to go unshared, unrecorded or have not been picked up by the media.

“Every name that has been subjected to racial cleansing deserves the same amount of equality and respect and justice,” Yosef said. “Every life stolen should receive their day in court. Justice should be blind and impartial.”

Rhonda DeLong, a professor of criminology at DePaul, serves as a part-time police officer in Michigan. Her philosophy on policing is community-based and includes a strong belief in listening to and connecting with the community she serves. As she encourages other officers to take part in her philosophy, she addresses concerns within the police department.

DeLong recalled a situation with a fellow officer who racially profiled a group of teenagers. Groups of teenagers sped past in cars while the officers decided when they should pull one of them over, she said. DeLong said numerous white teenagers passed them, but the officer with her decided he wanted to pull over a group of Latino kids. The officer had made statements about Latino individuals carrying knives and spray paint with them, giving them a two-in-one opportunity to arrest them, she said. DeLong was shocked by the officer, but said it was not the first time something like this has happened.

DeLong described other situations where she initially responded to the scene: one occurrence with a Latino man and another where  a man was trying to commit suicide. In both instances, DeLong said she was able to effectively communicate with the individuals and defuse the situation. When other officers arrived at the scene, excessive force such as use of tasers and being thrown on the hood of a cop car were used immediately without thought to the specifics of the call they had received.

“In my mind, there was no need for that. Verbal communication … can make the difference,” DeLong said. “There’s compliance and even when there isn’t compliance, why does that amount of force have to be used?”

DeLong believes there is an abuse of power creating a culture in policing that needs to change.

“We need to change the image of what policing is,” she said.

To Perez, this injustice is tethered to a perception around law enforcement that has become justified by the media. Many will side with the police because we have historically positioned policing as a heroic act, he said; TV shows, movies, news and more have created a good guy/bad guy stereotype leading us to believe the actions of the police are on the right side of the law.

“The media in many ways only reinforces very traditional notions of punishment and criminals,” Perez said. “Our natural inclination is to believe the officer and to see it from their perspective.”

Perez believes the media has the ability to shape our perception of police and enhance stereotypes of who is being policed. This works in favor of law enforcement who can continue to operate unjustly. He also said that the power that the police hold over minority communities serves as a massive power imbalance.

“It’s the position,” he said. “Authority versus no authority and they have power over this person.”