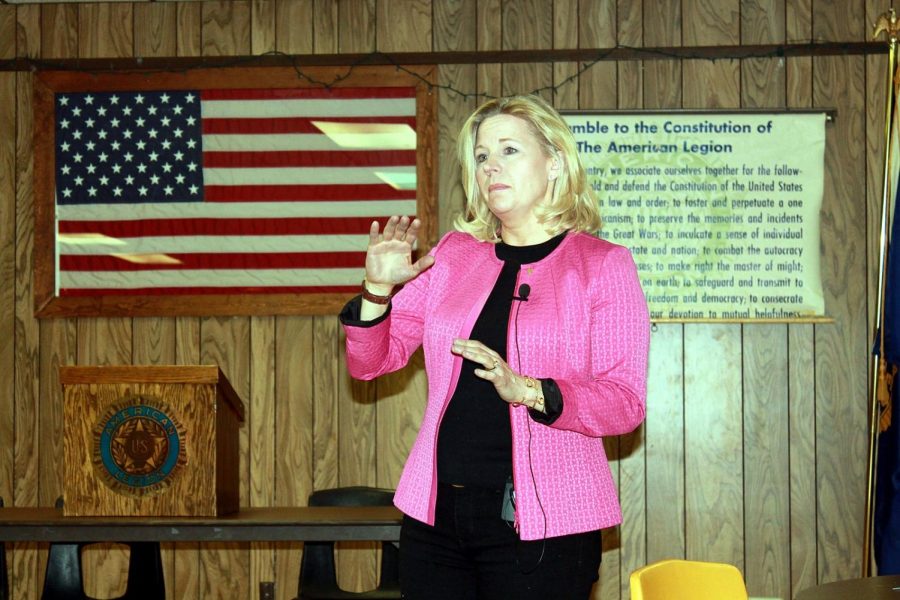 Liz Cheney speaks to a small crowd at the American Legion in Buffalo, Wyoming.

On May 12, House Republicans voted to oust Wyoming Rep. Liz Cheney as conference chair. Cheney had been vocalizing her opposition to the “big lie”— that the 2020 election was “stolen” from former President Donald Trump and that there was widespread election fraud.

Cheney should not be idolized or glorified for speaking out against the majority of her party. Although she is a prominent figure in the GOP, we shouldn’t praise our politicians for having common sense and accepting the truth about the election.

In the past, Cheney voted almost exclusively in support of Trump on bills that passed through the House.

“Her voting record places her among the most conservative members of the Republican Caucus,” DePaul political science professor Wayne Steger said.

Cheney voted in favor of the Securing America’s Future Act of 2018, an immigration bill that would have stipulated that the infamous Mexico and U.S. border wall be built. That bill ultimately failed. She also voted to pass an abortion bill that would ban abortions after 20 weeks of pregnancy called the Pain-Capable Unborn Child Act.

Her removal indicates that the GOP is dedicated to sustaining the lies about the election. But for the House of Representatives itself, there are no implications for “the balance of power,” according to Steger.

“Liz Cheney’s demotion is a clear indication that Republican leadership is far more interested in sustaining former President Trump’s ‘big lie’ than in confronting the truth,” Chris Bury, professor and senior journalist in residence at DePaul.

Ousting Cheney shows that the Republican party is dedicated to a person, and not the ideals the party claims to uphold.

“Cheney’s sin, in the eyes of leadership, was to publicly acknowledge that Trump himself instigated the violence at the Capitol on Jan. 6 with his relentless lies about the election results,” Bury said.

Because of Trump’s involvement, Cheney vowed to “never again let the former President near the Oval Office.”

For those of us who lean left, it can seem like a breath of fresh air when a Republican disagrees with Trump on a topic. Illinois District 16 Rep. Adam Kinzinger, also a Republican, sided with Cheney and criticized his colleagues for ousting her.. Kinzinger called it “a low point for the Republican party.”

Kinzinger’s family, in a statement I find to be comedically melodramatic, disowned Kinzinger for his views on the Jan. 6 insurrection.

“Oh, what a disappointment you are to us and to God!” part of the statement read.

“Democrats cheer Cheney, but only because she agrees with them on the matter of the big lie. She won’t get much love from Democrats,” Steger said.

Again, Cheney is not deserving of exaltations because she disagreed with the majority of the Republican Party on an issue. She refused to push a harmful idea, which was obviously a lie. She doesn’t deserve too much praise for having common sense.

The larger implication I’ve been wondering about are the implications of Cheney’s ousting for the Republican party itself.

Politics and the news cycle move fast, and America might not be talking about Cheney in a week. But her demotion is indicative of a larger pattern in the Republican Party that I don’t think is going away any time soon.

Many Republicans still seem blindly devoted to Trump. He has been accused of assaulting multiple women and has refused to denounce white supremacy, and yet people still follow him.

“Republicans have been operating on big lies for 20 plus years,” Steger said. “This is just a difference in magnitude. What differs in this case, is that the majority faction of a party is going to great lengths to sustain the lie.”

This could be potentially dangerous for the U.S. since Trump consistently upholds harmful, racist, and sexist ideals about groups of people–and isn’t afraid to show it.

“As long as the Republican Party claims fealty to an individual, a twice-impeached ex-president, instead of a set of ideals, it will face difficulty gaining more traction with American voters,” Bury said.

Most people who are staunchly conservative probably are not going to drop their obtuse devotion to Trump in the near future either. Still, Cheney’s ousting is a clear indicator of the Republican Party’s values — and that their loyalties don’t lie with their ideals, but rather with a disgraced man who hasn’t said anything of substance for the last half a decade. We shouldn’t make Cheney out to be a hero.