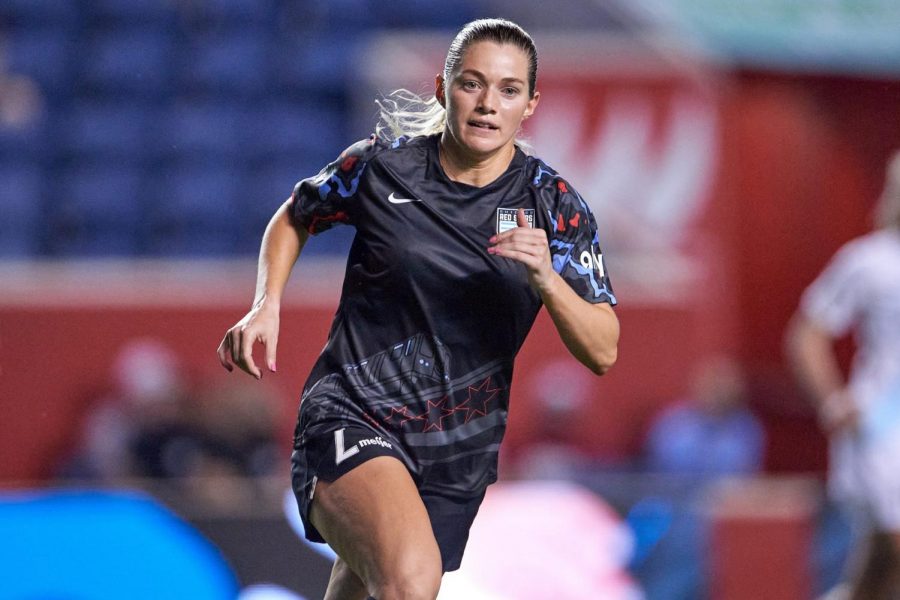 The home opener for the Chicago Red Stars on May 22 against NJ/NY Gotham FC was a game of firsts for the home side.

Not only was it the Red Stars’ first game at SeatGeek Stadium this season, but it also marked the debut of their new jersey, the “Momentum” kit.

In keeping with the tradition of the previous two kits, the new design once again drew heavy inspiration from the city. On the front of the black jersey, it prominently features an L train with Chicago’s four six-pointed stars underneath it.

On the train itself, the destination was “MKOT,” which stands for “My Kind of Town” and is the team’s hashtag on social media. The club said the new kit was “a reflection on where this historic club has been and a bridge to where we’re going.”

Julie Newkirk, the Red Stars graphic designer, was the person behind the design of the new home kit. It was a concept that was a year in the making.

Very excited to finally be able to show off all my hard work. Introducing the @chicagoredstars 2021 home kit – the momentum kit.

It’s been a year in the making and I’m SO PROUD. #womeninsports #NWSL #momentum pic.twitter.com/gajO0ySeep

The fan reception to the new home kit has been largely positive, keeping in line with the reaction to the two previous home jerseys.

“I recently went to a match and bought the black jersey,” said Red Stars fan Jesus Trejo. “Overall, I’m fond with it, but could do without the cameo sleeves. The white one is a top-tier NWSL [National Women’s Soccer League] jersey.”

Owing to that reception is the Red Stars’ ability to come up with a design that represents Chicago and uses the city as its focal point — a concept that has not gone unnoticed by fans.

“It definitely sets them apart from other jerseys around the league,” Trejo said. “I like how each takes on something Chicago-based, whether it’s the grid, the Loop or the neighborhoods, it’s a great touch.”

Anthony Guagliardo, the former graphic designer for the Red Stars, was the person behind the designs for the 2019 “Elevated” jersey as well as the 2020 “Neighborhood” edition.

Both his and Newkirk’s jerseys were designed in-house, which worked to their advantage.

“There’s a perspective that you don’t have when you go through an agency or Nike,” Guagliardo said. “They’re very good at what they do, but someone based out of another city would have a hard time making a design that’s truly ‘Chicago.’”

On his website, Guagliardo provides some background on the idea behind the design of both jerseys. For the 2019 version, the first in the trilogy, he said that the main aspect he wanted to incorporate was Chicago. He used the L design as well as incorporating the skyline. The jersey sold out in less than 24 hours after it was released and outsold the total sales of the 2018 kit in the month it was released.

The following season, he wanted to focus on the Chicago roots. Utilizing people’s pride in their neighborhoods, he came up with the idea to use all 77 of Chicago’s neighborhoods to make up the stripes of the city flag. It was another success, as it sold out the night of the release.

While creating a concept and design in-house does have its advantages, there is also a lot more interaction during the creative process.

“The design process was vigorous,” Guagliardo said. “There was a lot of back-and-forth with my  boss and much of the front office. It started with inspiration hunting: finding kits that worked and were well received and pulling their successful aspects to see how we can incorporate them in our design. Then from there it was a lot of trial and error.”

Identity is a significant part of sports culture. One of the simplest ways to build that identity is with the kit, or uniform, of the team one supports. Being able to incorporate Chicago into those uniforms is something unique the Red Stars have been able to do over the years.

“I think the Red Stars, and the NWSL, have been hitting a high standard as of late in terms of logos, renames and jersey rollouts,” said Red Stars fan and DePaul alum Sergio Arroyo. “The league feels fresh and hip, and it has to be to keep up with legacy teams from Europe.”

Even in a city like Chicago, which has franchises in the four major sports leagues, the Red Stars have managed to stand out. On the day of their launch, the Chicago Blackhawks helped to promote the kit by having three of their players take a few pictures wearing the jersey.

With the success of each of the last three home kits also comes added pressure — the pressure to one-up themselves. So far so good, but fans are already looking forward to what will be worn next season.

“I hope they keep the white jersey consistent with only slight modifications,” Trejo said. “I’m expecting the other jerseys to rotate and maybe have a new baby blue design. I just really hope they keep that Chicago theme, aside from just having the flag on it in some capacity.”