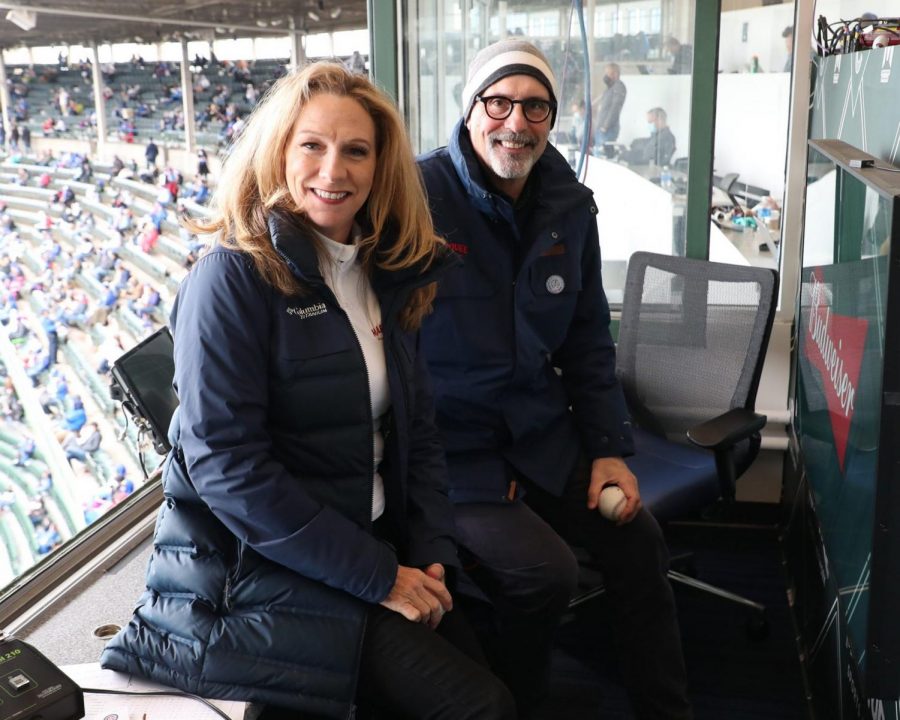 Beth Mowins and Jim Deshaies take a picture together during the Cubs’ game against the Pirates at Wrigley Field.

In 1924, the Chicago Cubs made history when Hal Totten broadcasted the entirety of the Cubs’ home season from Wrigley Field with station WMAQ. In becoming the Cubs’ first play-by-play announcer, Totten shifted the coverage of major league games from postgame newspapers to live coverage.

A few weeks ago, nearly 100 years later, Beth Mowins became the first woman in Cubs’ history to call a regular-season game. This historically significant event made her one of only five women total to have called play-by-play announcements of a Major League Baseball game.

“The great thing about sports is it’s all merit-based,” Mowins said in an interview with the MLB Network. “You have an opportunity to go prove yourself. And that’s kind of how I approached broadcasting. And when I saw that there weren’t any other women calling play-by-play, I didn’t see that as an obstacle; I saw that as an opportunity.”

In 2017, Mowins also became the first woman to call a nationally televised NFL game; this made her only the second female play-by-play announcer in NFL history. The first woman to call an NFL game was Gayle Sierens in 1987. Both of these are considered spectacular feats for women in sports; they were progressive moves played by an industry dominated by men.

“The biggest issue is that the people who run news outlets look like me. They are predominantly white men,” said Colby Marchio, a  graduate journalism student at DePaul and host of “Women in Sports Podcast.”

The 2018 Associated Press Sports Editors Racial and Gender Report Card evaluated over 75 newspapers and websites before determining that the news outlets failed their test in regard to gender hiring practices. One of the most significant conclusions made in the study was that only 10 percent of sports editors and 11.5 percent of sports reporters are women. There has not been an APSE Racial and Gender Report Card since 2018, but the conclusions that were made in this report follow a pattern seen in previous reports of a slow escalation of women in prominent positions within sports.

For women in the sports industry, the goal of an equitable workplace is just another glass ceiling needing to be shattered.

“I feel like I have to work so much harder than my peers, or the people sitting next to me in the press box, because I’m younger and I’m a woman,” said Lexi Almeido, sports editor of Boise State University’s newspaper, The Arbiter, and co-host of podcast, “Hold the Mic.”

While women remain a distinct minority throughout the sports industry, the consistent celebration of milestones that women reach may not be as helpful as we think.

“The more we don’t think about it, the better; teams need to stop making a big deal out of it. If you are good at your job, nothing else should stop you,” said sports communication and PRAD professor at DePaul, Dan Azzaro. “The more people that get in, the more normalized it gets. People can show up and show that they can do a good job, then the next step is equalized pay.”

The pay gap in the United States has remained steady for the past few years. In 2020, women earned 84 percent of what men earned, according to an analysis of median hourly earnings done by the Pew Research Center.

Between articles ranking the most attractive ESPN reporters and features on the fashion choices of sports journalists, a common idea that is very clear is that women, especially within the sports industry, are judged on their appearances. This is also consistently opposed by the lack of regard for the value of appearances that men face. Male journalists in the sports industry do not have to face articles critiquing their style nor their sexuality as it impacts viewers.

There has also never been speculation that a man got a job reporting in sports based on his appearance or how attractive he is. The scales in which men and women are judged throughout the sports industry are entirely different.

Overall, overt sexism within the sports industry can only be combated by holding those in power accountable.

“We need more people to speak out,” Azzaro said. “Most people don’t say anything because they are worried about themselves and their own jobs.”