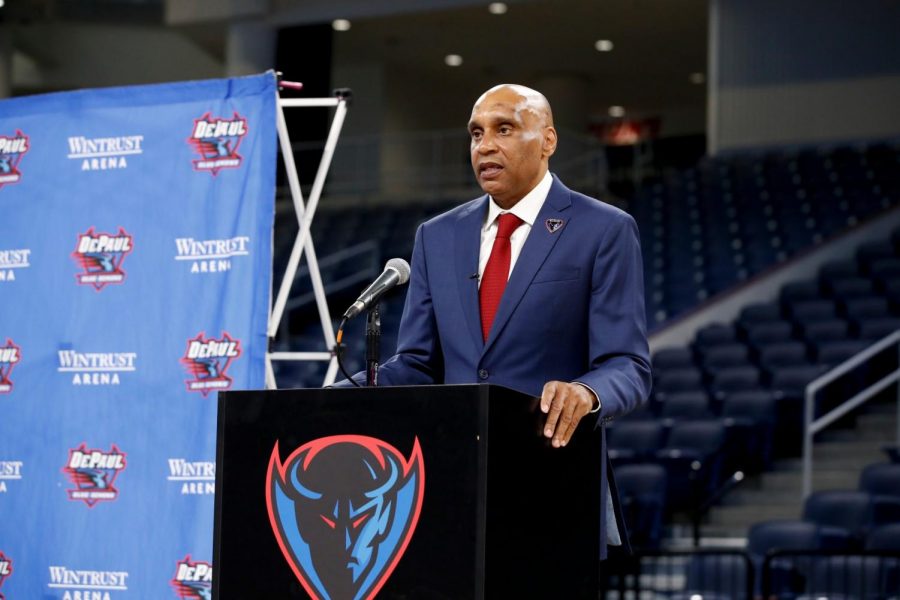 DePaul men’s basketball head coach Tony Stubblefield has wasted no time in trying to fill his roster for the 2021-22 season. After being hired two months ago, Stubblefield has brought in four new transfers to bolster next season’s team.

His latest addition, however, is the first player from Chicago that Stubblefield has been able to recruit to DePaul. Brandon Johnson announced two weeks ago that he will be transferring from Minnesota to DePaul.

“Brandon is another veteran with a lot of experience that will help us immediately next season,” Stubblefield said. “He can play inside and outside and over his entire career he has been a consistent scorer and rebounder at both Western Michigan and Minnesota. We know he’s excited to be coming home to Chicago to play this season and we’re ready for him to join us on the court.”

Johnson is a Chicago native and joins a group of transfers that includes Philmon Gebrewhit, Tyon Grant-Foster and Jalen Terry. In his introductory press conference, Stubblefield said he wanted to recruit from the entire state of Illinois, not just Chicago.

“When I look at a job, the one thing I look at is the talent base in the area, and, obviously, there’s great talent in the city of Chicago, the suburbs, the state of Illinois and I look at DePaul as being a national program we can recruit nationally,” Stubblefield said on April 7. “But, again, I think you got to start at home, you got to try to keep the local talent at home.”

The addition of Johnson gives DePaul another big man that can play inside the paint. The Blue Demons have only one traditional center coming back next season — Nick Ongenda.

“My first goal is to be a leader and to try and take them where they haven’t been recently,” Johnson told the Chicago Sun-Times. “Each day I treat [it] like it’s work, a day on the job. I will work hard, leave 100 percent on the floor. I want to show others how hard we need to work, to set an example.”

The Blue Demons will have an almost entirely new starting lineup next season. Besides Javon Freeman-Liberty, who announced last month that he will be returning to DePaul, the other four starters from last season’s team have either transferred or entered the transfer portal.

One of the main reasons that DePaul hired Stubblefield to replace Dave Leitao, who was fired on March 15, was his ability to recruit. In his previous role as an assistant coach at Oregon, Stubblefield helped recruit multiple five-star players, some of whom went on to play in the NBA.

“I see why he’s a great recruiter; I see why people really like him and he has such great relationships in college basketball,” DePaul athletic director DeWayne Peevy said on April 7. “Quite possibly the most compelling factor that led me to Tony is that he’s an elite recruiter, with extensive relationships throughout college basketball. He has an impressive knowledge of recruiting in the Chicago area, an area that will be pivotal in our success.”

Terry is one of the recruits that Stubblefield initially brought to Oregon. After taking the DePaul job, Terry followed Stubblefield to Chicago.

Gebrewhit was one of the first names to announce his commitment to Stubblefield’s squad in April. He is coming over from South Plains Community College where he averaged 11.6 points and 3.8 rebounds per game last season.

“I chose DePaul because of the opportunity,” Gebrewhit told The DePaulia. “Coach Stubblefield is a proven winner and developer. I’m excited to get on campus and get Wintrust Arena rocking again, we are going to make some noise.”

Gebrewhit told The DePaulia that Stubblefield made a hard push to get the sophomore to come to Chicago throughout their conversations.

“My relationship with coach [Stubblefield] is great,” Gebrewhit said. “He is very genuine and real. He was consistent with my recruitment and made sure to make me a priority and made it clear to me. Coach did all the recruiting himself, that’s why I also felt so comfortable because it’s the head coach saying these things.”

Grant-Foster was the first player that Stubblefield was able to recruit to DePaul. He is coming over from Kansas after spending one season with the Jayhawks. Prior to his time at Kansas, the 6-foot-7 forward spent a couple of seasons at Indian Hills Community College.

In Grant-Foster’s limited time at Kansas, he did showcase his athleticism and ability to get to the basket. His best game came against Omaha on Dec. 11, scoring 13 points and grabbing seven rebounds. Grant-Foster also had eight points, eight rebounds and two blocks against North Dakota State six days earlier.

“He certainly has a knack for the ball and aggressiveness to be able to score the ball at all three levels: at the rim, mid-range and from three,” Plona said. “He certainly is a guy that’s worked on his game and worked on his body, and he’s become a very, very high-level player. I still think his best basketball is in front of him.”

Grant-Foster and Johnson will need to receive a waiver from the NCAA to be immediately eligible to play next season. The NCAA did recently pass a one-time transfer rule that will allow first time transfers to get eligibility right away, but this new rule does not apply to players who are looking for a new school for the second or third time.