After unenrolling from DePaul, a young mother wishes to return and keep on learning 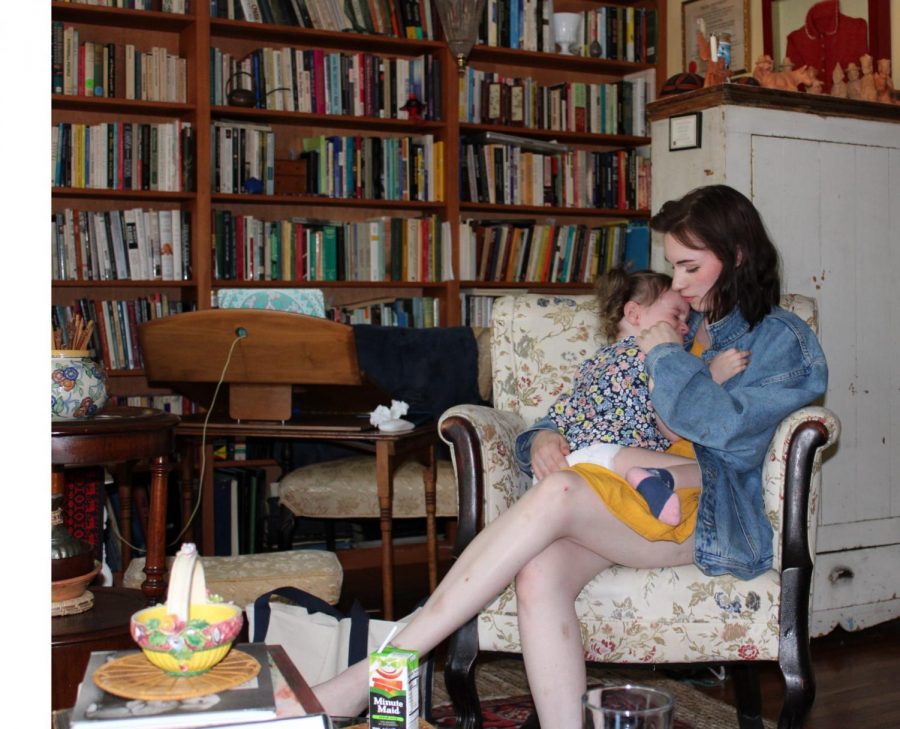 Emma and her daughter, Juniper, in a rocking chair at her former professor's house.

Between the autumn and winter quarters, DePaul students have about six weeks off for winter break before having to endure the cold, exhaustingly long winter quarter. But Emma, who was a sophomore and international studies major at the time in 2019, didn’t return back to campus for that winter.

She took an incomplete in one of her classes and unenrolled from DePaul, but now two years later, she’s hopeful that she will be able to return to the university again, she told The DePaulia while sitting in a rocking chair in one of her former professor’s home here in Chicago this past week.

The fall quarter in 2019 wasn’t easy on her or her health –– the winter break was much needed time off for her. So she went back home to her small town in Missouri.

While she was home one day, Emma ran a 5k with her family when she noticed she wasn’t feeling well –– she assumed herself it was just from being a college student, a little out of shape and her preexisting health conditions. But later that night, the pain got worse.

“I’m like googling, I can’t figure out what’s wrong,” Emma said while recollecting the night from two years ago.

She stumbled to her bathroom in the middle of that November night and felt what was like her water breaking.

“So I’m googling and like, there’s no way,” she said. “There’s absolutely no way but everything’s lining up, I’m googling. I’m like, feeling awful.”

Emma then walked out of her house and down two blocks to the corner of her street. Snow was falling all around her as she called herself an ambulance. She didn’t want the sirens and the lights of the vehicle to wake her family up.

When the paramedics asked her how far along she was, she wasn’t able to tell them. She was on birth control, she was used to not getting her monthly period.

When doctors ordered an ultrasound, they couldn’t find the head of the baby. She was too far in labor. It was too late to deliver her baby with the help of an epidural.

Shortly after arriving at the hospital, Emma delivered a baby girl. “They asked if I wanted to know the gender. And that was like a  pivotal moment for me,” Emma said. “And then they asked if I wanted to hold her. And I think that’s like, there’s no going back. Because I mean, you hold your baby, and everything else goes out the window.”

When she looked out the hospital window she caught a glimpse of a juniper tree and her baby was born right at dawn –– so she named her Juniper Dawn.

Her parents were unaware that Emma had spent the night in the hospital, nonetheless delivered a baby.

When she returned home after, she told her parents she spent the night at a friend’s house.  “I go home, I go home. I leave the baby at the hospital. I checked myself out like 12 hours later,” she said.  “I go home. I see my mom. She goes, ‘you look really tired.’ I’m like, ‘you have no idea.’”

After she told her mom and the rest of her family, Emma and her partner, Peter had to decide whether or not they were going to follow through with an open adoption.

“At first we were going to do like an open adoption where I could still communicate with her and go back to school,” Emma said.

But after talking about it with her mom, Emma decided she was going to take a semester off from DePaul and stay in Missouri with her family. “Because this is like a huge change. Either way, I would just take the semester off or go to school down here [Missouri] for a little bit. We’d already decided that I should at least take a break.”

When Emma and Peter made the final decision to call the families who were interested in the open adoption, the papers and forms were nowhere to be found.

“We couldn’t find them anywhere,” Emma said “We tore apart the room. They weren’t under the pillow. They weren’t anywhere, we could not find them. Finally, we just talked about it. And I was like, ‘if it’s possible, I just can’t imagine, at this point, giving her up,’ the thought just broke my heart every time.”

After making the decision to raise Juniper on their own –– Emma found the adoption papers under the bed.

“But I mean, the deciding factor for me really is that I had so much support from my family,” Emma said.

Emma’s grandma is largely involved in raising Juniper and watching her while Emma is busy or occupied with her school work.

“She’s really close to my grandma, obviously because my grandma watches her all the time,” Emma said.

Juniper is now two and a half years old, she is an inquisitive toddler, pointing to objects and asking what they are, running around with her hair in little pigtails, and asking her mom if she can sit on her lap. She will be starting pre-school next year as Emma finishes her degree.

After delivering Juniper and getting her bearings, Emma enrolled at Southern Missouri State in Joplin. While she misses the international studies and peace, justice and conflict programs at DePaul, she’s currently completing a similar degree in international political affairs.

For Emma, it’s just not the same in Missouri as it was here at DePaul.

“It’s the international studies program that I miss the most,” Emma said. “I get emails from there [the programs] all of the time. You know, we don’t even –– that’s not even a major that’s offered at Missouri Southern. They’re doing such cool things [at DePaul].”

Emma said that much of her academics at Missouri Southern center around her having to construct and build her own major based on what international politics and affairs courses they did offer.

“As far as the academics and like the academic community, I think that’s something that was really special about DePaul,” she said.

When she transferred to Missouri Southern, many of the credits she earned from DePaul didn’t transfer over, placing Emma further behind in her degree track.

She had to go back and take English 101 and other degree requirements and electives –– the additional courses and requirements added an extra year to her academics.

But she’s looking forward to graduating next year and has her goals set on going back to school to get her master’s degree or PhD –– hopefully at DePaul.

Emma and Peter came back to Chicago for the week, visiting Peter’s family on the West Side. The week was busily filled with family events and visiting college friends –– but Emma made time to see one of her former international studies professors, Heidi Nast.

The academics and the close knit community at DePaul is what motivates Emma to come back. Nast and Emma have stayed in touch since Emma left Chicago, and this past week, Emma paid Nast a visit.

Juniper painted in Nast’s kitchen, ran through her halls and watched a show on her tablet in Nast’s garden while Emma was able to sit down with The DePaulia, and the former student and professor were able to catch up with one another.

Emma never expected that she would become a mother while in college, and when she went home for winter break she didn’t know she wouldn’t be returning to campus the next quarter.

“So now that I’m more established, it’s [reapplying to DePaul] a lot more of an option,” Emma said while Juniper sang to herself. “I’m definitely looking at DePaul’s master’s program, especially because I already have connections here.”I love being in school. Being in school for a long time is something I would like to do.”

While the experience was life changing and surprising, Emma is grateful Juniper is a healthy and happy baby –– considering she didn’t know she was pregnant with her while she was in school, working at the Student Center till one or two in the morning, staying up late and “having McDonalds three times a week.”

Emma said that she’s thankful for all of the support she’s been able to receive from her family and shared advice for others who may be in a similar situation of raising a child while finishing college.

“I think it’s important to not be afraid to ask for help… a support system is the most important thing as far as I know” she said. “Because I think there’s all this pressure to finish your degree in four years and get in and out as soon as possible but you’re going to do better if you take your time.”

Towards the end of the interview, Juniper was tired from all of the traveling and socializing and began crying on her mother’s lap, “Is this the ‘terrible twos?’” Nast asked.

“Yeah,” Emma said. But a trip to Nast’s garden, a bag of goldfish, a couple jumps on the professor’s mini trampoline, and a few biscoff cookies cured the tears.