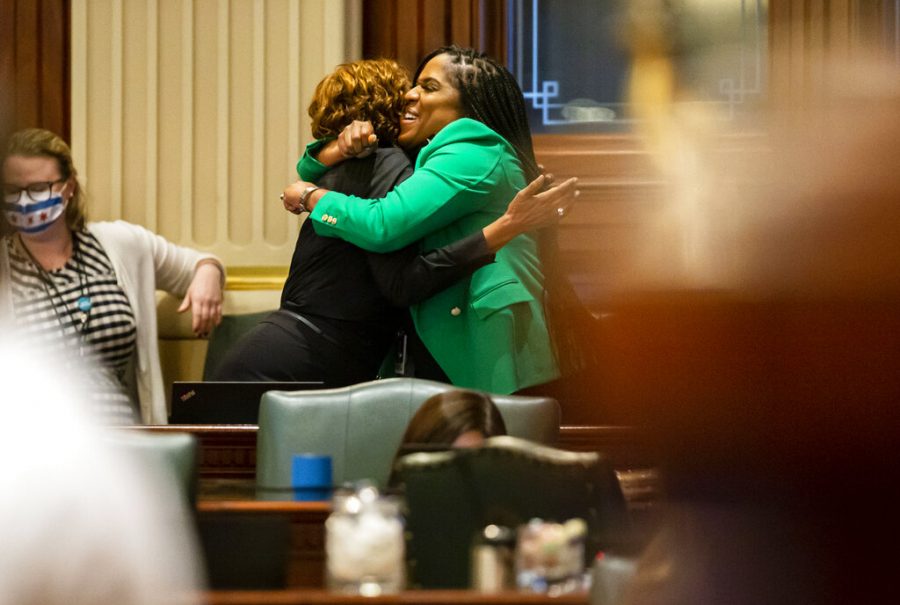 Senate Bill 818, a bill that updates the sex education curriculum in Illinois, passed in the House with a 60-48 vote last Friday, June 4. With major opposition from Republicans, the bill is headed towards Gov. J.B. Pritzker’s desk for approval.

Included in this bill is a new curriculum from elementary school to high school on what lawmakers have called “age appropriate” health education on sex and gender based on the different grade levels from kindergarten to 12th grade. Students in kindergarten through second grade will be taught about personal safety, consent and healthy relationships.

Grades three through five will focus more on puberty, sexual development, sexual orientation and gender identity and expression. Grades six through eight will learn more about sexual health such as pregnancy, STDs and interpersonal violence. Following ninth to 12th, students critically analyze what they’ve learned, and how it could impact their future personal health.

While the updated sex education curriculum in Illinois will follow the National Sex Education Standards, the bill does not change the option for parents and legal guardians to allow their child to opt out during the sex education classes.The bill has changed the requirement for schools to teach sex education only within the specifc curriclum or not at all.

This has caused a lot of controversy within the Senate on whether or not sexual education should be included in the state school’s curriculum at all. An article with Capitol News Illinois stated

“Republican lawmakers in the Senate argued school districts downstate and in rural areas would choose to not offer sex education rather than choosing to offer a curriculum that is contrary to the values and beliefs of their residents. They said it would result in fewer students having access to essential sexual health information.”

Julian Boryszewski, a graduating senior at DePaul, commented on his experience in Illinois public school sex education and how different it was compared to his peers in college. Boryszewski said he was fortunate to have a teaching assistant in high school to start the conversations with the students instead of glossing over important topics.

“Compared to all my classmates in my human sexuality class, I was one of the very few that was extremely lucky to have a slightly more progressive type of sexual education in school,” Boryszewski said. “A lot of students said that where they grew up, it was abstinence only or didn’t talk about it at all.”

Boryszewski went to Lake Park High School in Roselle, Illinois, and was a sophomore in 2015 when gay marriage was legalized. But when it came to sexual identity, his school never educated the students beyond the definition of homosexuality.

“I believe that a pride flag was hung on the day but that was by the students,” Boryszewski said. “The whole thing was extremely glossed over, if you’re gay, that means that you like the same sex, if you’re heterosexual that means you like the opposite sex, and that’s it. We had little to no education on different ways to identify one’s sexual orientation, which I actually didn’t learn about until college.”

“For far too long, LGBTQ youth were either invisible or expressly stigmatized, and I remember that — it burned into my soul,” Cassidy said. “As a kid who didn’t understand why I didn’t fit in, who couldn’t define why I felt different, and whose parents were not an option to go to. I wish I had had a teacher I could turn to; I wish I had had a curriculum that didn’t call me unnatural.”

Another topic of concern amongst Republicans is the idea of teaching kids about sex too early and how this may encourage sexual promiscuity at a young age.

Allen Rendak, a music teacher in Chicago, said he feels it’s important to start some of these topics when students are young, to help them figure out their identities in a safe environment without judgement.

“I think some kids, especially depending on their home life, live in an environment that holds racial bias, prejudice or homophobia and they are never taught what is wrong from their parents and I think that should be addressed at a younger age,” Rendak said. “People are people and you have to accept people for who they are. I think if you started at that age level with those kinds of conversations and then progressed with harder topics, planned out appropriately, I don’t think it’s inappropriate to start that young.”

Boryszewski and many other students who have grown up through the Illinois public school system are excited to finally see changes in how sex ed is taught.

“I hope to see the future of sex education for Illinois [and] Chicago Public Schools is a more safe and open, educating experience, where children and students do not feel shame for any questions that they have,” Boryszewski said. “I hope that the information taught is able to really make a difference in our teen pregnancy rates, and especially in our STD rates. I just overall hope that everyone can be more welcoming in the future to people that have identified differently, and choose to define themselves how they truly want to be defined.”