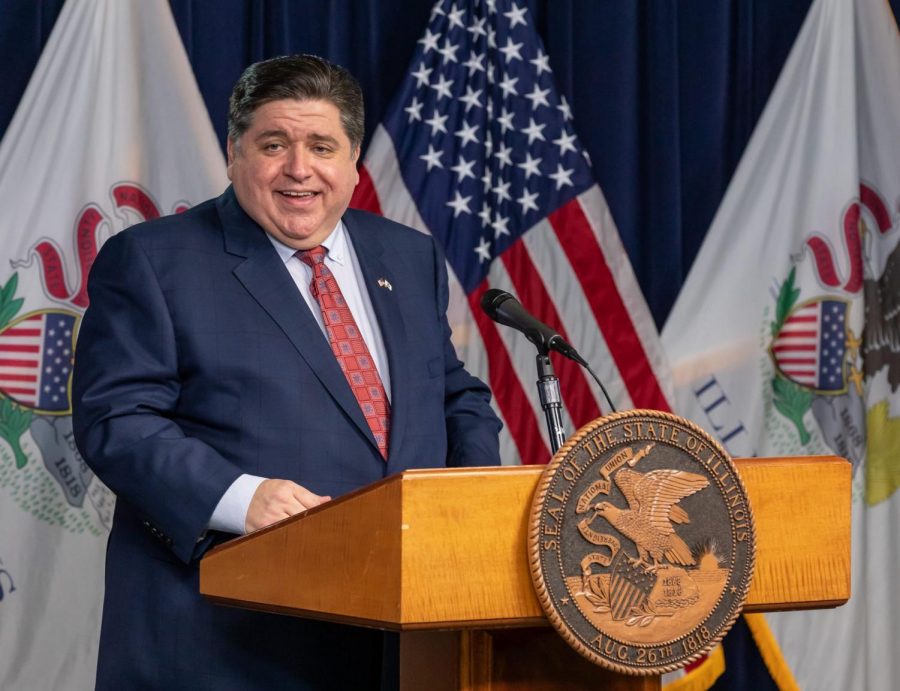 FILE-Illinois Governor JB Pritzker talks to journalism students, Thursday, Feb. 4, 2021, in the press room of the Thompson Center in downtown Chicago. Journalism students and faculty attended the candid discussion about the governor’s career and Illinois politics, followed by a question and answer session from the university's student media outlets.

Note: This headline was changed from “Chicago’s reputation for corruption” to “the state’s.” This was decided to better reflect the story’s content.

The bill, which has yet to be signed by Gov. J.B. Pritzker, is aimed at preventing lawmakers from lobbying other units of government and interrupting the “revolving door” of lawmakers leaving and later returning to lobby the General Assembly.

Pritzker has not yet stated whether he will sign the bill into law but said that the legislation is a good first step.

“It isn’t perfect, and more work definitely remains, but there are more ways now to putting a stop to corruption than there ever have been before,” Pritzker said at a Statehouse news conference.

Advocates have also criticized the legislation for not going far enough. Alisa Kaplan, executive director of Reform for Illinois, joined this criticism, emphasizing the lack of independence provided for the Legislative Inspector General, and the bill’s short six-month period during which former lawmakers would be prohibited from lobbying.

In comparison, 36 states have a one-year revolving door provision and over a dozen indicate a two-year time period.

“So the vast majority of states have a longer cooling off period and that’s a big weakness of this bill,” Kaplan said.

Jeff Fiedler, communications director for the Chicago Republican Party, also criticized this provision in the bill, saying that the revolving door period should be five years.

Kaplan also says the Legislative Inspector General needs to have a lot more independence than she has right now.

The Inspector General is responsible for receiving and investigating “complaints of violations of any law, rule, or regulation or abuse of authority or other forms of misconduct by members of the General Assembly and all state employees whose ultimate jurisdictional authority is a legislative leader, the Senate Operations Commission or the Joint Committee on on Legislative Support Services,” the Office of the Legislative Inspector General specifies.

The Legislative Inspector General is provided slightly more independence under this bill, allowing them to open investigations without asking legislators — but they are still required to ask legislators to subpoena documents or witnesses.

“And that’s a really big problem because there have been a few cases where inspector generals have said that legislators have refused to publish reports where they found wrongdoing,” Kaplan said.

Kaplan testified in front of the Illinois House Committee on Ethics and Elections on April 13, outlining these findings in more detail.

Kaplan also commented on an earlier version of the bill that inhibited local governments from enacting their own lobbying rules that were stricter than the state’s. In the new version, Chicago is exempted from this entirely and is allowed to draw their own rules in regards to lobbyists.

Kaplan said that this was a good thing because state rules should not restrict local government’s ability to enact stricter ethics reforms.

Fiedler, though, said that Chicago seems to “make up the rules as they go” and that a city charter will need to be drawn up in order to advance ethics reform in the city. Chicago currently has a municipal code which can be amended daily by the City Council.

“So that’s why reform in Chicago is so important, and the biggest aspect of reform that the Republicans in Chicago would advocate for is to create a city charter and that there are rules to follow that are not made up as we go along,” Fiedler said.

Nick Kachiroubas, a professor in DePaul’s School of Public Service, agrees that the bill should expand further but notes that there was a lot of pressure to pass such a reform, especially amid recent stories of indictments and investigations into Illinois lawmakers.

“I think that, you know, obviously to really reform ethics amongst elected officials and governments in Illinois I think there would need to be a lot more comprehensive, systematic look at that,” Kachiroubas said. “Not particularly related to lobbyists but in terms of elections and election disclosure and fundraising limits.

Kaplan added that Illinoisans have been waiting a long time for changes in the state government and that this is why these ethics reforms are so important.

“They have many reasons to believe that their government is not always putting their interests first and these are really important changes that need to be made to start to restore that trust and to restore that confidence,” Kaplan said.