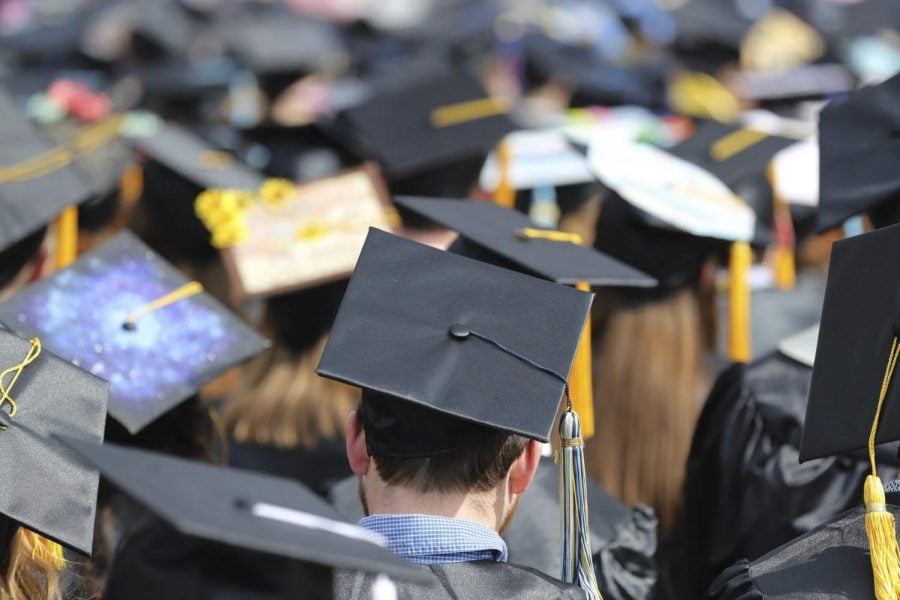 FILE- In this May 5, 2018, file photo, students attend the University of Toledo commencement ceremony in Toledo, Ohio. Colleges across the U.S. have begun cancelling and curtailing spring graduation events amid fears that the new coronavirus will not have subsided before the stretch of April and May when schools typically invite thousands of visitors to campus to honor graduating seniors.

When I was told that the city was my campus at my first orientation at DePaul, I took it to heart. And like so many people, I loved the city so much I stayed for as long as I could.

Over the next five years I lived in three different neighborhoods in four different apartments, worked on-campus jobs on both campuses and took more accidental naps on the CTA than I can remember.

Like other Double Demons, my entire college career has taken place at the “little school under the L tracks.”

The one thing that I’m leaving DePaul and Chicago without? A proper graduation for either of my degrees. Instead, me and my fellow Double Demons have two years of YouTube links to celebrate our achievements.

Coming from someone who planned how I was going to decorate my college grad cap at the same time I was decorating my high school one, I’ve been thinking about commencement for quite a while.

And of course, I’m sad to miss out on the chance to celebrate the moment all those sleepless nights and seemingly endless D2L submissions finally paid off. When it was announced that last year’s commencement was cancelled just a few months into the pandemic, I was disappointed of course, but my position in the combined degree program meant that I’d have another graduation the next June if all went according to plan. Now as I sit here in the “next year” that seemed so far away back then, my second commencement has been cancelled just the same.

Instead of celebrating all the hard work that earned that special piece of paper with my family and friends, I left Chicago unceremoniously and headed for Arizona because my lease was up and there really wasn’t any reason for me to stay any longer.

Driving on the Dan Ryan Expressway just moments into a 24 hour drive, I couldn’t help but think about my time in the city — where I came as an extremely anxious 18-year-old who didn’t know a soul and left with a newfound confidence and lifelong friends behind me.

While I would have liked a proper commencement, the pandemic year highlighted for me what is truly important. In a year when so many people are dealing with heartbreak and unimaginable grief, I have something to celebrate and be grateful for. I have something my family and I can point to as proof that the year we lost to the pandemic wasn’t a complete waste.

Truth be told, I’m proud to have finished my graduate career at DePaul in this uniquely challenging year. From having never taken an online class before to that being the only option, I was forced to adapt in more ways than one. Nothing could have prepared me for when The DePaulia suddenly switched to online-only — something I was completely unfamiliar with after publishing a print paper for the previous four years. In a time of extreme uncertainty, we as a team came together to make sure that the DePaul community had vital information about the pandemic, especially in the first few weeks where so much was unknown.

Leaving with those experiences under my belt I know I’ve learned more practical skills from adapting to the pandemic year than can be packed into a 10-week course. And while I won’t have a big commencement to mark the occasion, I know deep down that I’m leaving DePaul and Chicago a different, better and more well-rounded person than I was when I arrived. And isn’t that the point of going away to college — to find yourself, your people and your vision for your own future?

Don’t get me wrong — I will be watching my name and face slide across the screen during the virtual commencement. But I’ll also know that the celebration and the highly sought-after piece of paper is more or less arbitrary. Instead, the knowledge, skills and confidence that I have will be my real souvenirs from this time of my life.

In that spirit, I encourage other Double Demons to reflect on what they’ve gained from being here, especially this last year. Earning a degree is no small feat but to do so during a pandemic, civil unrest and a contentious election? Now that’s something worth celebrating.