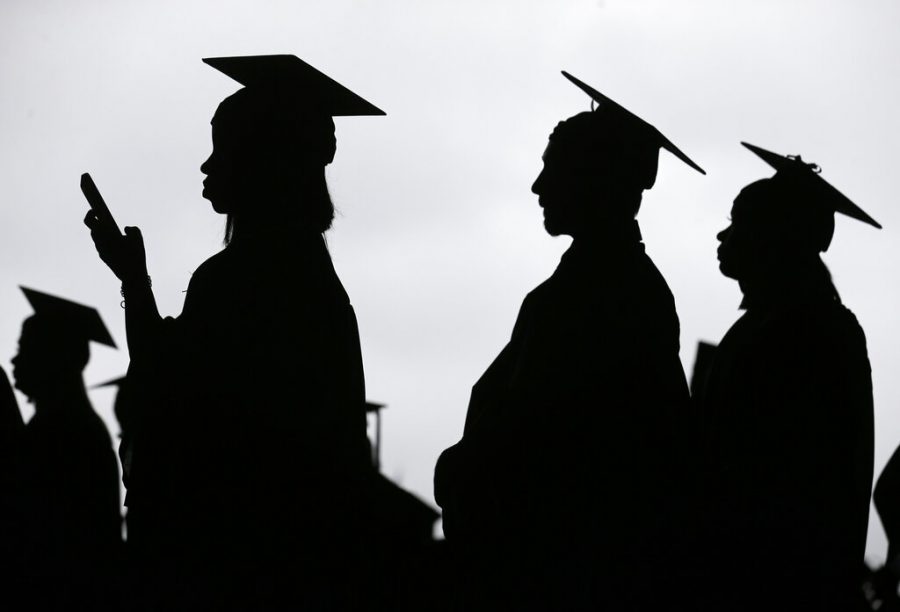 FILE - In this May 17, 2018, file photo, new graduates line up before the start of the Bergen Community College commencement at MetLife Stadium in East Rutherford, N.J. There’s no single policy or action that will alleviate America’s $1.74 trillion student loan debt crisis while simultaneously preventing students from taking on unaffordable amounts of future debt. Higher education financing experts are divided on the exact combination of solutions, but all agree it will require a multipronged approach. (AP Photo/Seth Wenig, File)

As the school year comes to a close, college students continue to stress over student loans and debt.

During his campaign, President Joe Biden discussed cancelling some student debt. He proposed cancelling $10,000 of each individual’s loans. However, Biden has yet to follow through on that commitment.

“In first-generation students, including myself, you’ll see the students working full time or two to three jobs at once on top of a full-time school schedule just to maintain expenses,” she said.

At DePaul, the price tag for a full year is $59,000, including housing, tuition and other expenses. For Illinois private university expenses, the average student will spend $53,949 per academic year, according to EducationData.

Nationally, the class of 2019 graduated with an average of $29,000 in both private and federal debt according to Student Loan Hero.

Loans and debt are in the forefront of many students’ minds before and during their academic careers. Students like Kaur are trying to pay off loans during the year while students like sophomore Kelli Tosic were thinking about them before applying.

“The fear of student debt once I began attending university forced me to sacrifice my mental health throughout high school,” Tosic said. “I signed up for as many advanced placement classes as I could, took standardized tests multiple times and applied for countless scholarships in order to make college as affordable for me as possible.”

As a college education becomes more of a requirement for jobs, it is simultaneously becoming less accessible due to the financial investment and burden.

“Now, [college degrees are] much less of an option than it is a requirement for most jobs, even many entry-based jobs,” Rocha said. “Looking at STEM careers, a lot of entry-level things are at minimum, a bachelor’s degree, and most of them require a master’s degree.”

Students of various minority communities are more likely to drop out due to overwhelming financial debt.

“A big thing that we’re also seeing is dropout levels, especially when you look at people of color, LGBTQ students, first-generation students,” Rocha said. “A lot of times it has to do with finances.”

First-generation students are more susceptible to not understanding the complexities of financial aid.

“The interest that you might have on your loan, depending on what loan you get, can change the value astronomically, and that’s the thing too is that it can target specifically first-generation students who might not know, they might not really understand the difference between subsidized and unsubsidized loans,” Rocha said.

Between work and classes, affording higher education can take a mental and physical toll on students.

“Student debt can set you back before you even get to take a step forward,” Kaur said. “Working to pay off your debt can lead to overworking or taking on a career that is beside your path just so you can clear up the debt. It just leads to an unhappy and stressful life.”

However, many Gen Xers and baby boomers claim that younger generations should be expected to pay off their debts like they did. Rocha said she believes that this is unreasonable because of the stark economic differences between the 1960s and now.

“Back in the ‘60s, college was an option,” she said. “You could get a perfectly decent job without college, but you could also get a more specific career that requires it.  More people need to get a college education [now] in order to survive and sustain a decent lifestyle.”

Many against cancelling student debt claim that students will need to work harder to pay off loans. Although the students are still working as hard as earlier generations, economic standards are harsher.

“You should want things in life to get easier for the younger generations, you shouldn’t want the future generations to suffer like you did,” Rocha said. “Because you remember what that was like, you remember all of the worry, all of the pain, all of the suffering — why would you want to wish that on other people?”

“Regardless of how hard many work, they are still forced to take out hundreds of thousands of dollars in loans to simply receive an education,” Tosic added. “Going to school should be a basic human right that is accessible to all, and no one should need to forfeit their own mental well-being in order to make their education semi-affordable.”

As higher education continues to be a job requirement and loans becoming less accessible, students are asking for the higher educational system to change to become more accommodating.

“We are taught from a young age to plan to go to college or that the only way to be successful is to pursue higher education, so it does not make sense to drag us down with debt when doing so,” Kaur said.