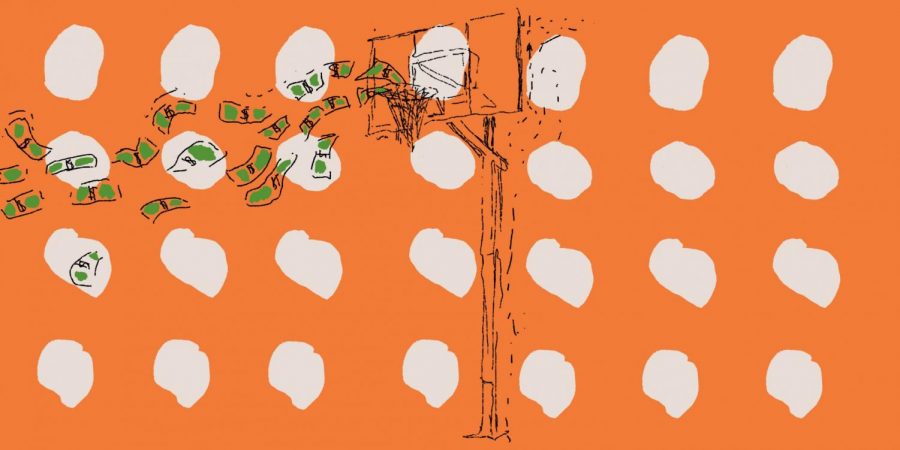 Kam Buckner knows all too well about being a college athlete and not being able to profit off of his name, image and likeness (NIL).

During his time as a football player at the University of Illinois, Buckner witnessed how the university was making money off of the football team’s popularity, while the players never received any compensation.

One day, Buckner and one of his teammates, Pierre Thomas, went to a local mall near campus and saw that the university was selling Thomas’ jersey for “about” $55. Athletes never receive a cut of the profits that are made from this or any other players’ jersey getting sold.

“The school was selling [Thomas’] jersey in the local mall, and we went to the mall one day and we saw the jersey cost about $55,” Buckner said in an interview with The DePaulia. “And what he said was, ‘Look, I’ve only got $20 bucks in my pocket, so at this juncture I can’t even afford to buy my own jersey. However, when these jerseys sell, the school gets money, the Big Ten gets money, the NCAA gets money, the store gets money and Nike gets money; however, I don’t get none of that.’”

Buckner is now a Democratic Representative from Chicago in the Illinois House of Representatives. Seeing the type of money that universities and the NCAA are making from athletes’ NIL, Buckner co-sponsored a bill that would allow college athletes to make money based on their name, image and likeness.

Senator Napoleon Harris, a former Northwestern University football player, also sponsored the bill. The Illinois state legislature passed the NIL bill, 95-18, in the house and, 56-2, in the Senate two weeks ago. The bill is now on Gov. J.B. Pritzker’s desk to sign, and if he does, it would go into effect July 1.

“It will fundamentally change the landscape both for those young athletes who are being recruited to go to places like DePaul, and also student-athletes who are already there,” Buckner said.

Even though this bill will give college athletes a freedom they have never seen before, there are certain guidelines that athletes will need to follow when looking for an endorsement deal.

“We also wanted to make sure that we were protecting [athletes] and not putting them in situations that 10-15 years down the road would be detrimental to their quality of life,” Buckner said. “Because of that, we put some parameters in and some prohibitions on things that they can’t advertise and that they can’t endorse — things like alcohol, tobacco, cannabis, sports betting and gaming, adult entertainment — so we carved those things out to make sure that we kept some guardrails in place to protect our student-athletes.”

Robert Kallen, an NCAA expert and a clinical professor of economics at DePaul, believes that these are positive developments, but that the NCAA will look to stall and try to prevent these state laws from going into effect in less than a month.

The Senate recently held a hearing on July 9 to address NIL. The Senate heard from various experts and NCAA President Mark Emmert. In that hearing, Emmert responded to a question regarding whether college presidents would seek injunctions against states with NIL laws.

“It’s been widely discussed. … It won’t be my decision, it’ll be the Board of Governors’ decision,” he said. “But I believe that for universities themselves to file lawsuits against their own states is a very challenging thing to do.”

One of the experts who testified before the Senate Commerce Committee was Marquette law professor Matthew Mitten. He believes that Congress should take action to pass a law that will give everyone NIL rights, not just athletes in select states.

“I’m one of the ones that believes that Congress should enact a national federal law that provides uniform NIL rights to all students,” he told The DePaulia. “But what’s happening is with various states that are now starting to enact this is, ‘oh we don’t want our in-state colleges and universities to be disadvantaged by student-athletes not having the right to receive NIL income.’”

In his testimony, Mitten went over three issues that Congress should focus on when it comes to NIL rights.

“One, Congress should enact a uniform law,” he said. “Two, they should preempt state laws to say this is the one law that’s going to apply nationwide. And then the question of what is the scope of a student-athletes name, image and likeness?”

Mitten believes it’s important for Congress to address what college athletes can and can’t profit off of. For example, he believes that athletes should be able to make money off of their name, nickname and even their jersey number. However, he doesn’t think that college athletes should get a share of the media revenue because that would be a “form of revenue sharing and pay-for-play.”

These are issues that Congress and the NCAA are still working to figure out. The Senate Commerce Committee held another hearing on Thursday that gave college athletes a chance to testify.

The Athletic reported last month that the NCAA Division I Council is expected to vote on NIL legislation in its June 22-23 meeting.

If Pritzker signs Illinois’ NIL bill into law, then universities in the state will see a shift in the entire landscape of college athletics, which will also apply to states that have similar laws going into effect July 1.

The issue now becomes if Congress can act in time before July 1 to pass a federal law that gives these advantages to every state.

“It seems like there’s a pretty strong consensus that it needs to be one uniform, national law and probably ought to preempt all the state laws,” Mitten said. “But the disagreements are, well what ought to be the aspects of any federal law, and then it’s like, well, should it just be NIL rights or should there be a broader college athletes Bill of Rights? So, that’s really where the political divide comes.”