South African court to rule on arrest of ex-president Zuma 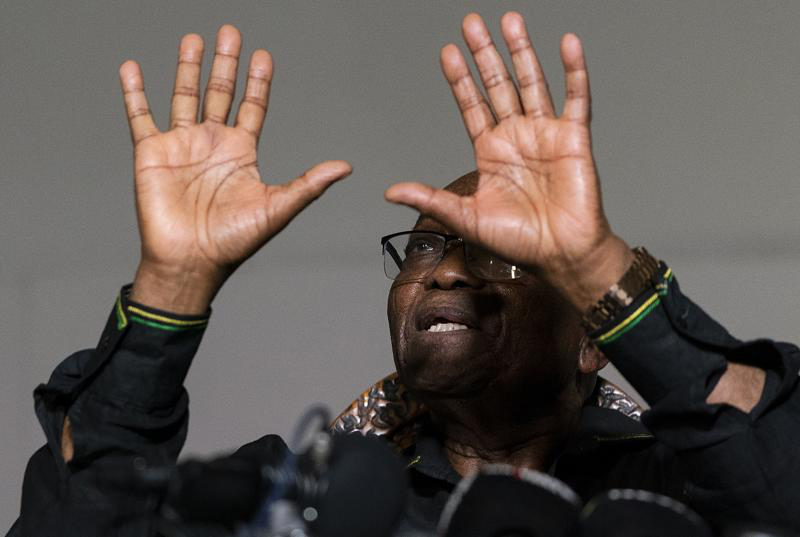 Former president Jacob Zuma gestures as he addresses the press at his home in Nkandla, KwaZulu-Natal Natal Province, Sunday, July 4, 2021. Zuma told hundreds of supporters gathered outside his rural estate that he is appealing his 15-month prison sentence and impending arrest by police. South Africa’s top court, the Constitutional Court, last week sentenced Zuma to prison for defying a court order that he should testify before a commission investigating allegations of rampant corruption when he was president from 2009 to 2018. (AP Photo/Shiraaz Mohamed)

NKANDLA, South Africa (AP) — A South African regional court is to rule Friday on whether it will block an order by the country’s highest court for the arrest of former South African President Jacob Zuma.

The Pietermaritzburg High Court in KwaZulu-Natal province heard arguments Tuesday by Zuma’s lawyer that the court should stop the order made last week by the Constitutional Court that police must arrest Zuma by midnight on Wednesday after he was sentenced last week to 15 months in prison for contempt of court.

Zuma’s lawyers argued that the court should stop the police from arresting him until the Constitutional Court rules on his application to rescind the sentence, which will be heard on July 12.

Zuma has been found guilty of contempt after failing to obey the court’s order to appear before the commission investigating allegations of corruption when he was president from 2009 to 2018.

Zuma’s lawyer, Dali Mpofu, argued in court on Tuesday that police minister Bheki Cele had not opposed Zuma’s application and that nobody had argued that he was a flight risk or would evade arrest if his application failed.

In an opposing argument, advocate Tembeka Ngcukaitobi said Zuma was already in defiance of the court order by not handing himself over to authorities. Zuma should have already handed himself over to police, said Ngcukaitobi, representing the commission of inquiry.

“We are dealing here with a repetitive, recalcitrant law-breaker in the form of Mr. Zuma. He has now approached you (the court) to assist him in breaking the law further. You should reject that,” said Ngcukaitobi.

The judgment in the case will be delivered Friday.

Over the weekend, hundreds of Zuma’s supporters had gathered outside his homestead in the rural area of Nkandla in KwaZulu-Natal, vowing to prevent any attempts to arrest him. Defying the country’s COVID-19 regulations against public gatherings, they grouped together, many without masks, and sang songs praising Zuma’s role in the fight against apartheid, South Africa’s previous regime of white minority rule.

The African National Congress, the party of Nelson Mandela which Zuma led from 2007 to 2017, on Tuesday condemned the actions of Zuma’s supporters and urged support for the rule of law.

The ANC’s National Executive Committee said it deplored the “counter-revolutionary calls for violence and even civil war, parading of armed groups and flagrant display of weapons” outside Zuma’s home.

By Tuesday the crowds supporting Zuma had dispersed just a few of Zuma’s supporters stood at the entrance to his home. Several armed police officers could be seen monitoring the area and at least three police vehicles could be seen patrolling around Zuma’s home.