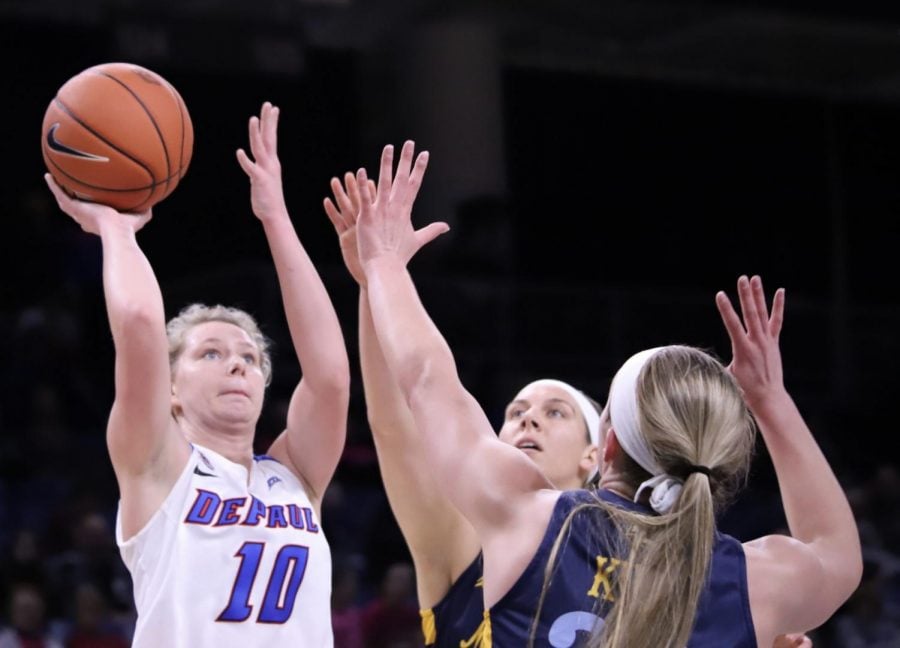 Lexi Held tries a floater over Marquette defenders in her 31 point effort at the 2020 Big East tournament.

Disclaimer: the author is a member of the DePaul Track and Field team

The NCAA suspended its rules preventing college athletes from profiting from their name, image and likeness, and DePaul athletics and its student-athletes are thrilled about the changes.

What sparked the rule to change?

On June 21, the Supreme Court ruled unanimously against the NCAA and its compensation rules prohibiting universities from giving academic benefits to athletes. The court also found trouble with the NCAA’s business model and its definition of an “amateur athlete.”

“The bottom line is that the NCAA and its member colleges are suppressing the pay of student-athletes who collectively generate billions of dollars in revenues for colleges every year,” said Justice. Brett Kavanaugh of the Supreme Court in a 45-page synopsis of the court case titled National Collegiate Athletic Association v. Alston.

On July 1, the situation reached a further solution. The NCAA’s board of directors decided to suspend their rules that prohibited athletes from selling the rights to their names, images and likeness.

“It’s been talked about, or in the works, for a few years so when they finally said they were going to change, it was quite shocking,” said Deja Church, 22, a fifth-year senior on DePaul’s women’s basketball team. “I was pretty excited about it and I’m excited for the players coming in the future as well.”

The NCAA has delayed its permission of student-athlete compensation for decades. Since 1984, the NCAA has expanded the types of benefits universities can give, including the amount of scholarship money schools can offer. It wasn’t until 2014 that schools could hand out scholarships up to the full cost of attendance.

“It’s been talked about for what feels like a year or so, so it wasn’t super shocking but I was excited that it was passed to explore these new opportunities,” said Lexi Held, 21, another senior on the basketball team.

Now that the bill has been signed in the state of Illinois, what happens next?

One athlete at DePaul is already testing his skills in the market to try and capture positions to represent local companies.

“I applied to be a Barstool athlete and I reached out to Heartbreak Running Company,” said Damian Rodriguez, 19, a sophomore on the cross country and track team. “I’m a marketing major and I understand the importance of building recognition for a business, even if it’s just wearing their merchandise.”

DePaul athletics is already 10 steps ahead of the competition, by starting a “comprehensive entrepreneurial and brand development program” called LEGACY, according to DePaul University athletic director DeWayne Peevy.

The program will pair with the university’s College of Communication, College of Business and College of Entrepreneurship to help educate athletes on how to capitalize on their name, image and likeness.

“I think that’s a really good thing DePaul is doing [the LEGACY program] because when you give power to young men and women, we kind of don’t know what to do or we don’t have the guidance for it,” said Church. “With that program, it gives us a little more power over some of our peers at other schools that don’t have that opportunity to learn more about entrepreneurship and promoting your brand.”

According to the guidelines set by the NCAA, student-athletes are not allowed to go through their schools to receive brand deals, endorsements or anything compensation-related. However, there is no rule prohibiting schools from educating their athletes, like DePaul is doing.

“I think the biggest thing with this [LEGACY] is education, just so there are no mistakes down the road,” Held said. “Resources like that, that we could be given to educating us because this is new territory for everybody, so it would be cool if we could get resources like that.”

While many DePaul athletes are excited about the new rule, some are focused on their upcoming seasons and not worrying about the craze surrounding the new rule.

“I have no plans currently, as of right now my focus is on basketball,” Church said. “I don’t want to give my attention to anything like that and get distracted. People have reached out to me on social media, but I don’t think it’s worth entertaining.”

The waters are still murky at this time for student-athletes. Only 10 states have passed the bill allowing student-athletes to make money. One thing that is for certain, however, is that this rule could benefit all athletes of all sports — possibly women even more so than men.

“A lot of the women players make their money from the [WNBA] and overseas, but a lot of their money comes from endorsement deals, and I think that’s an area where there’s a lot of money on the floor for women in particular because we’re so versatile,” Church said. “I think it’s going to educate young girls about what type of money is out there outside of the professional money.”