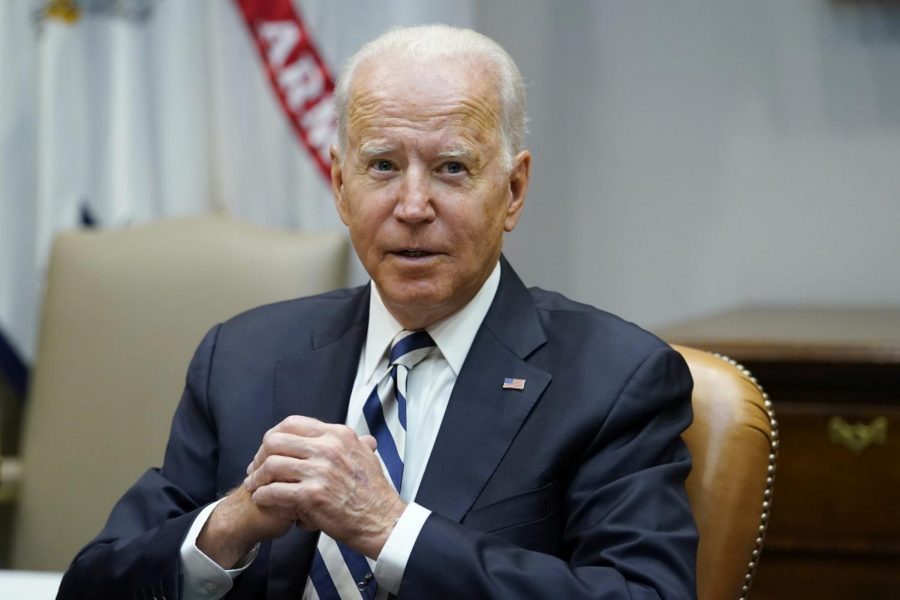 President Joe Biden speaks during a meeting with a bipartisan group of governors and mayors in the Roosevelt room of the White House in Washington, Wednesday, July 14, 2021, to discuss the bipartisan infrastructure deal in the Senate. (AP Photo/Susan Walsh)

Ever since his election in 2020, prominent media outlets from the New York Times to TIME Magazine have likened President Joe Biden to a modern-day Franklin Delano Roosevelt. After all, both took office during record unemployment and economic displacement, both promised bold policy solutions to turn around a hurting United States and both looked to unify a nation recently ravaged by substantial and divisive world events.

However, just over half a year into Biden’s presidency, it’s looking increasingly unlikely that the former vice president will be the bold, progressive leader many Americans were hoping for.

The Biden administration got our hopes up with the passage of their $1.9 trillion Covid-19 relief bill in March. This package was a political layup; with so many Americans financially hurting from the fallout of the pandemic, the significant relief bill was supported by a sizable majority of U.S. adults.

Despite the bill’s success, Biden is now failing to pass subsequent legislation that could considerably improve the lives of millions of Americans. This isn’t just because Biden was one of the more politically moderate presidential candidates in the 2020 Democratic field. Instead, it is his yearn for bipartisan compromise that is hindering his potential legislative productivity as president.

“The Biden administration has two paths to be ‘effective’ in pursuing their agenda with the current Congress,” says DePaul political science graduate Luke Kirkpatrick. “He can work within the system — like [former President Barack] Obama did — and try to use the negotiation muscles that he campaigned on in order to achieve some kind of incremental change. Or he can eschew long-standing institutions and prioritize the more ambitious parts of his agenda while he still has party control of Congress.”

Unfortunately, Biden seems to be repeating the mistakes of the Obama administration by trying to work “within the system” — a system that has long been criticized for failing to produce meaningful societal change over the past several decades.

The failure of this approach can be seen with the president’s current efforts to pass his infrastructure bill. In late March, Biden announced The American Jobs Plan, a $2.3 trillion package that broadly included funding for public transit, improvements to current infrastructure like roads and bridges and over $400 billion in clean energy tax credits.

But instead of relying on the Democratic congressional majorities like what was done with the Covid-19 relief bill, the Biden administration sought to negotiate with Republicans to pass a bipartisan infrastructure package. Months after the initial announcement of the American Jobs Plan, Biden finally announced on June 24 that 21 senators had reached a bipartisan infrastructure deal.

The new deal is a shell of its former self — the initial $2.3 trillion package turned into a $579 billion one. While this may be great news for deficit hawks like Senator Rand Paul, it’s devastating for the millions of Americans who were hopeful for upgrades to national infrastructure, creations of sustainable jobs, expansions to affordable housing and long-needed action against climate change.

Climate change is one area in particular that Spencer Reed, regional field director of Bernie Sanders’ 2020 presidential campaign, feels is being neglected by this process. After all, a bulk of what was removed from Biden’s original American Jobs Plan was the $400 billion in tax credits for clean energy.

“The scale of the climate crisis is almost impossible to adequately understand or communicate, and the gulf between the seriousness with which [Biden] seems to be taking the issue and the level of response it requires of us is staggering,” Reed told The DePaulia.

Reed believes that Biden’s bipartisan approach to legislation like the infrastructure package is greatly hampering his effectiveness as a president.

“I absolutely think his focus on appealing to a handful of Republican senators is coming at the cost of his legacy and the future of our planet,” he said.

Despite the bipartisan nature of the revised infrastructure bill, it’s still unclear whether it will achieve the necessary 60 votes in the Senate. If it does, Biden will hopefully use this momentum to pass some of the more significant pieces of his agenda through budget reconciliation, which can be accomplished with just the Democratic majority. But given his history as a legislator and hesitancy to abolish the filibuster, this seems unlikely.

In contrast, FDR used bold executive orders and his Democratic majority in Congress to pass the wildly popular and influential New Deal in the 1930s. He was initially criticized for perhaps using too much power in his attempt to pass New Deal legislation, but considering it was responsible for implementing social security, a federal minimum wage and child labor bans, Roosevelt’s use of power here was beneficial to the country.

It seems awfully optimistic to call Biden a modern FDR. And based on the current landscape of American politics, these comparisons from much of the media seem misguided anyway.

“Even FDR was not FDR in the way that he’s now understood; the progressive policy measures enacted during his presidency were a response to organizing and strikes by workers, the unemployed, the early civil rights movement, and the growth of left wing political organizations,” the Chicago Democratic Socialists of America wrote in a statement to The DePaulia.

Kirkpatrick also acknowledged that Roosevelt had an overwhelming party majority throughout his presidency, further proving the uselessness of the Biden-to-FDR comparison.

“Reaching ‘across the aisle’ was rarely necessary,” he said.

Maybe it’s time to abandon comparisons to former leaders and focus on the present, instead.