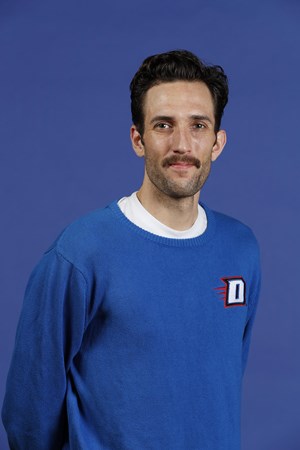 (DePaul Athletics Site) DePaul assistant Volleyball coach Nick Vogel, who will help coach the U17 and U18 athletes in Anaheim.

DePaul volleyball assistant coach Nick Vogel has been chosen to coach U17 and U18 athletes in the USA Volleyball National Team Development Program (NTDP) Summer Training Series in Anaheim, California, from July 18-23, the athletic department announced on Wednesday.

“I am deeply honored to have been chosen to participate in the training of these elite young women who are the future of our USA Women’s National Team,” Vogel said in a statement to DePaul athletics. “Team USA has always held a place very deep in my heart and the ability to work with this program while the senior squad is off in Tokyo chasing gold adds a level of significance that is really special.”

Vogel played volleyball at UCLA from 2009 to 2012. He also competed with the United States’ Men’s National Team from 2009 to 2014. He played professionally with teams in Europe, including VfB Friedrichshafen, whom he helped win the German Cup and Bundesliga Championship.

Vogel retired from professional play in 2015 and went on to begin his coaching career at his alma mater for a year before serving as an assistant coach at UC San Diego. He began coaching at DePaul in 2018.

Previously known as the USA Volleyball High Performance program, the NTDP trains and prepares young athletes to play volleyball at a high level.

“I’m extremely excited to get out to Anaheim, to the same gym where countless Olympians have trained, to work hard every day making each other better,” Vogel said.