Olympians forced to adjust without support of fans or family 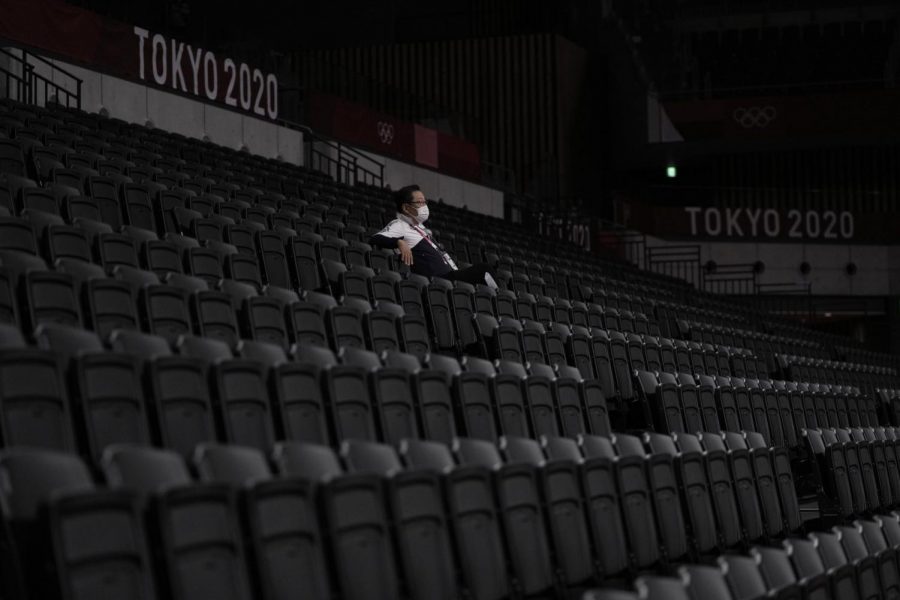 A man, wearing a protective face mask, sits inside an empty Ariake Arena, just before the start of a women's volleyball preliminary round pool A match between Japan and South Korea, at the 2020 Summer Olympics, Saturday, July 31, 2021, in Tokyo, Japan. (AP Photo/Manu Fernandez)

A grand part of the Olympics are the stadiums and crowds full of cheering fans from all over the world who come from near and far to support their home country’s athletes. However, this year, the fans are all at home, leaving the stands empty and quiet.

Due to rising cases of Covid-19 in Tokyo, a state of emergency was declared, and new protocols were put in place for the Olympics, as reported by USA Today on July 8.

As part of the new protocols, fans were banned from attending the Olympic events and the athletes were put in a bubble from the start of the Olympics on July 22 to the completion of the Games on Aug. 8.

Usually, athletes can turn to the crowds during competitions and see fans waving flags and cheering for their country. Now, the stands are silent, and the athletes must rely on themselves, their coaches and their teammates to stay engaged and energetic.

Some athletes in individual sports may find the silence calming and helpful in their concentration. Others in team sports, such as volleyball and basketball, may feel the impact of no fans on a larger scale. Fans bring a lot of energy to the building, and without that, the dynamic and environment of the games creates a whole new challenge.

“It was really odd not playing with any fans,” Ongenda said. “So definitely we had to try to hype ourselves up and hype our teammates up in layup runs or even during the games when we’re the only people screaming when someone scores a bucket.”

Olympic athletes have spent hours training and preparing for the Games in unprecedented ways and, when it finally pays off in a medal, their first thought is to share the moment. While many are rooting on the athletes and supporting them from home, not having on-site cheers after an Olympic event takes some of the thrill away from the moment.

Accompanied by the absence of fans in the buildings, athletes also don’t have their families with them in Tokyo. For many, their family is their main support system, but this year, families had to stay at home and watch virtually with the rest of the world.

“I think that the hardest thing would be [that] you work so hard, and you have such a big accomplishment, and your family can’t come,” Lexi Held, DePaul women’s basketball guard, said. “Yeah, it sucks, not having fans and people that really believe in you and stuff, but your family not being able to share that moment with you I feel like would be really difficult.”

What used to be camera shots of emotional family members in the stands are now videos of family and friends gathered at home to watch the athlete chase their dreams. This is the new norm for the Olympic Games.

When 17-year-old swimmer Lydia Jacoby won gold for the USA in the 100-meter breaststroke on July 27, the cameras immediately cut to a shot of her parents in tears at a watch party. The scene then switched to show her friends and classmates jumping up and down in excitement in her hometown of Seward, Alaska.

It was a life-changing experience for Jacoby, but her family was not there to share that moment with her.

All athletes have had to adjust to the new Covid-19 protocols and playing with no fans this past year. They have had to learn to lean on their teammates for support and energy both in and out of play – and Olympians are no different.

“I’m pretty sure this is going to take a mental toll on some of those athletes out there,” Deja Church, DePaul women’s basketball guard, said. “But I just probably think it’s kind of the same thing we went through last year, just having your teammates and those people who you’re with to rely on and just to be your support system for that short amount of time you’re out there.”