OPINION: We need to do more to stop the Delta variant 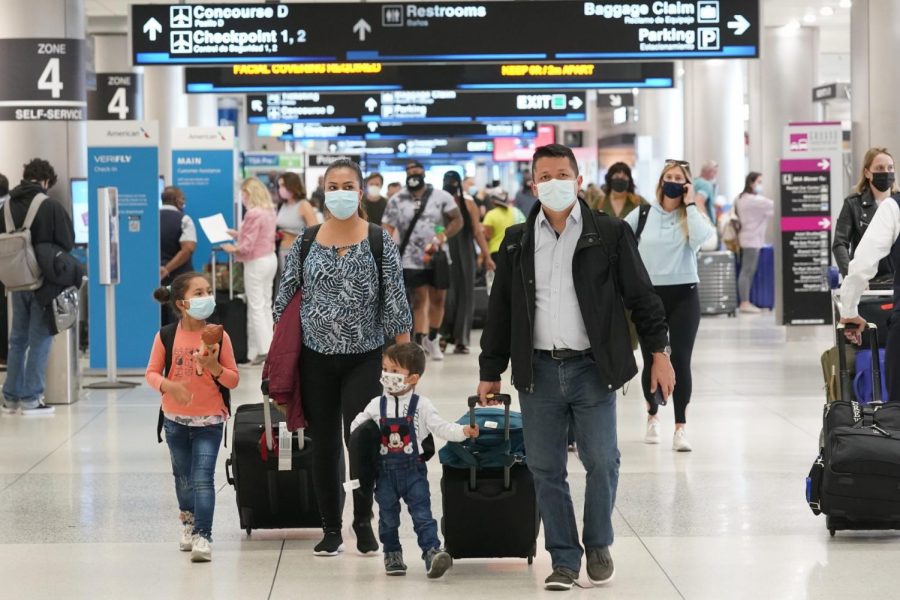 Henry Hernandez, his wife Karina Gonzalez and their children Jose Sebastian, 2, and Laura, 6, of Colombia, walk towards the baggage claim area at Miami International Airport, Friday, May 28, 2021, in Miami. The couple were surprised to be offered the Johnson & Johnson COVID-19 vaccine upon arrival to the U.S. It is their first overseas trip since the pandemic began last year. Florida's Emergency Management Agency is running the program through Sunday.

We started wearing masks at work again this week.

It’s a minor inconvenience all things considered, and a necessary one at that. Coronavirus cases are once more surging around the nation, with a daily average of about 100,000 new cases in the United States since the beginning of August. Many areas in the country are now re-enforcing indoor mask mandates and reconsidering their “return to normal.”.

But I thought we were past this. Despite Covid-19 appearing strongest in early 2021, the rollout of effective vaccines have since caused cases to fall drastically. We caught a glimpse of normalcy this May and June as cases plummeted to their lowest point since the pandemic began. Thousands of Americans were still getting sick every day, but the numbers were trending in a direction that caused many of us to forget about the looming threat of the Coronavirus for the first time in quite a while.

Perhaps this was a bit naive. In just a matter of weeks, cases of Covid-19 have spiked once again thanks in large part to the more contagious Delta variant, which has gained significant momentum in the United States. In states like Louisiana, the pandemic is as bad as it has ever been.

Dr. Phillip Funk, Professor of Immunology at DePaul University, explained that this new surge is alarming, but not necessarily all that surprising.

“[Covid-19] is an RNA-based virus, which means that as it replicates itself, it generates these variants,” Funk said. “If it makes 10 million viruses, a high number of those are going to have some changes in genetic code along the way. Some of those will make the virus inactivated and won’t help it. But because there are so many people getting infected, the ones that do make the virus better get transmitted more.”

Based on this, it has always been inevitable that largely unvaccinated populations, which get infected more easily, would spawn new variants of the Coronavirus. The reason the Delta variant is so concerning is because it seems to be infecting vaccinated people, too.

“The fact is that we are starting to see the potential for the virus to get around the existing immunity that people have — and that’s just because it’s continuing to be allowed to circulate,” Funk said.

With cases on the rise, enforcing mask requirements and capacity restrictions once again might be necessary to combat this new wave of infections. The state of Illinois seems to agree.

“Illinois Department of Public Health has fully adopted CDC’s Interim Public Health Recommendations for Fully Vaccinated People which recommends masking for everyone, including fully vaccinated individuals, in public indoor setting in areas with substantial and high transmission,” Melaney Arnold of the IDPH wrote in an email statement to The DePaulia.

Once again, the mask requirement is a minor inconvenience considering the magnitude of this pandemic. But that doesn’t mean that it’s not disappointing. We seem to have returned to doing the bare minimum to combat the Covid-19 crisis — one that punishes everybody regardless of vaccination status.

In contrast, nations in the European Union require proof of vaccination – or at least a negative test in some countries – to enter restaurants, museums, theatres and other public indoor spaces. This would be far more effective in the United States than our loosely enforced mask rules, but vaccine requirements remain too politically unpopular to implement on a federal level.

That could all change pending the success of New York City’s newly announced policy requiring proof of vaccination to enter restaurants, gyms and Broadway shows. If New York can get cases under control with this strategy, it’s reasonable to assume that other cities and states may follow suit.

For Chicago, doing something more than mask recommendations will be a necessity in the near future. While the spike that Chicago is currently experiencing is not as drastic as other areas of the country, infections are still steadily increasing in the city and Illinois as a whole. Dr. Funk predicts that full capacity sporting events and events like Lollapalooza could bring a wave of new cases to Chicago.

Cameron Hollins, a DePaul graduate and attendee of Lollapalooza, agrees.

“[Lollapalooza] did make you show proof of vaccination if you wanted to not wear a mask, but once you were inside, there was no way of enforcing that,” Hollins said. “With people still catching the Delta variant, even with the vaccine, I definitely think we’ll see more cases here post-Lolla.”

As somebody who has been fully vaccinated for several months, this new spike in cases doesn’t concern me from a personal health standpoint. For me, it’s concerning that we seem to be right back to where we were a year ago. The pandemic — one that took a bigger personal toll on me than I’d like to admit — is now being needlessly prolonged when there are multiple effective vaccines to combat it.

If we keep allowing Covid to spread and mutate, these vaccines won’t hold their efficacy for much longer.