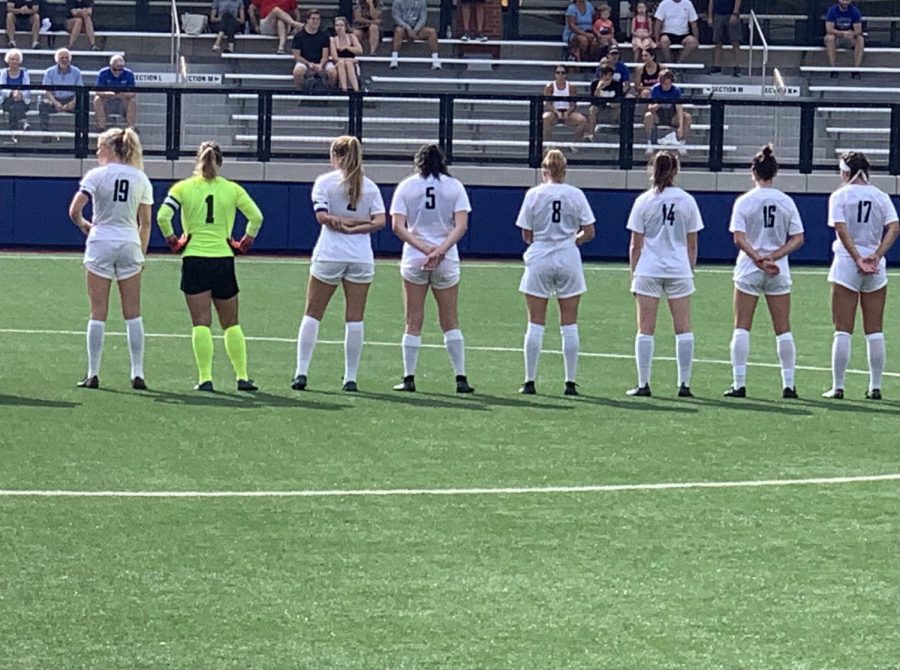 The DePaul women’s soccer team kicked off the season on Thursday against Iowa at Wish Field with head coach Michele O’Brien at the helm in her first game. Despite an early goal, the Blue Demons fell to the Hawkeyes in a 2-1 loss.

Three transfer students and four freshmen made their official Blue Demon debuts on Thursday. Meanwhile, returning players, such as Morgan Turner, Sydney Parker and Mollie Erikkson were able to revert to a normal schedule after playing last season in the spring of 2021.

Senior Sydney Parker put the Blue Demons on the board two and a half minutes into the game with a goal that resulted from a corner kick and an assist from senior Brooke Weitzel. That goal is Parker’s second in her collegiate career after she scored her first goal last season.

“We’ve been working hard for the past two and a half weeks,” Parker said to The DePaulia. “So, to come out first and to get that leading goal was nice.”

However, the Hawkeyes responded with vigor and overpowered the Blue Demons for the rest of the first half. Much of the play was in the Blue Demons’ defensive zone and Iowa scored two goals to take the lead for the remainder of the game and make the score 2-1.

“I think we got outplayed the first half and I think they were winning more 50/50 battles than we were, and I thought their mentality was tougher than ours,” O’Brien said. “Second half we absolutely turned it around and there was a clear difference in our mentality, which helped us.”

The Blue Demons were locked-in during the second half and maintained possession of the ball in Iowa’s zone for long periods of time, while also keeping the Hawkeyes scoreless.

While DePaul was not able to tie up the game, the team worked hard to create offensive opportunities, earning five corner kicks in the second half after only having one in the first half. The strong second half allowed the Blue Demons to see what worked and what didn’t to help them as they look forward.

“I think we need to recognize when to play balls behind and when to keep the ball,” O’Brien said. “But we have to get behind defenses and turn them around and look to get our shots off.”

The Blue Demons will travel to Rochester, MI, to play Oakland University on Aug. 26 before coming back home to play University of Illinois Chicago on Aug. 29.