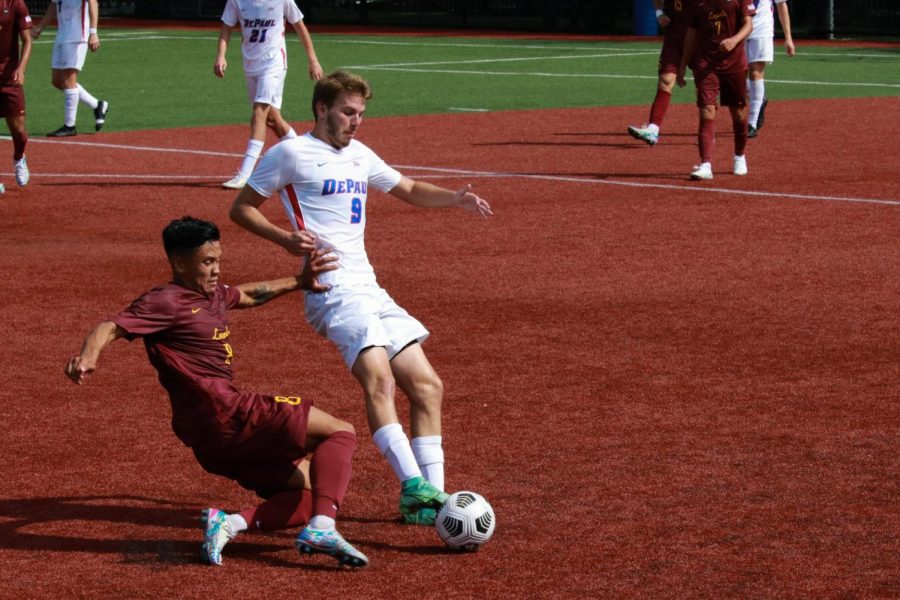 Sophomore forward Marek Gonda fights for a ball in the first half against Loyola.

The Red Line rivalry heated up when DePaul men’s soccer kicked off their season against Loyola Chicago on a hot Thursday at Wish Field. However, it was Loyola who came out on top as the Blue Demons fell 2-1 in the matchup.

The two teams remained scoreless for a majority of the first half, despite multiple corner kicks and scoring opportunities. Loyola broke that tie with ten minutes left in the half, but DePaul was able to bounce back less than five minutes later when forward Jack Richards scored to tie the game at one.

“It felt good [to score],” Richards said. “Hopefully I can build on that. Normally in the past few years, I’ve been waiting [until] later in the season to get my first goal, but now it started off early.”

Within the first few minutes of the second half, though, Loyola scored to take the lead and make the score 2-1. Despite efforts to tie the game again, the Blue Demons were unable to keep the ball in Loyola’s defensive zone for long.

The game may have ended in a loss, but many Blue Demons had strong debuts regardless. Sophomore Gandhi Cruz made his first regular season start in goal and stood strong against Loyola’s dominant offense. He faced 13 shots and three shots on goal and only let in two goals. Freshman Charlie Clancy entered the game as a substitute and made a difference immediately battling offensively and fighting hard to keep the ball in Loyola’s defensive third.

“I thought they did great,” head coach Mark Plotkin said. “It’s a tough game to have your first regular season game be when you’re playing in this kind of rivalry because it’s super intense, but I thought they held their own extremely well.”

“I’m proud of a lot of moments today and I thought we created enough to score some goals and win the game,” Plotkin said. “They [Loyola] made a couple more plays than we did and they were super tough to break down. Some good moments to build off of, but I think some really good learning moments for us to learn from going forward into the rest of the season.”

The Blue Demons play again at home against St. Thomas on Sept. 2 before traveling to Wisconsin to take on the Badgers on Sept. 5.