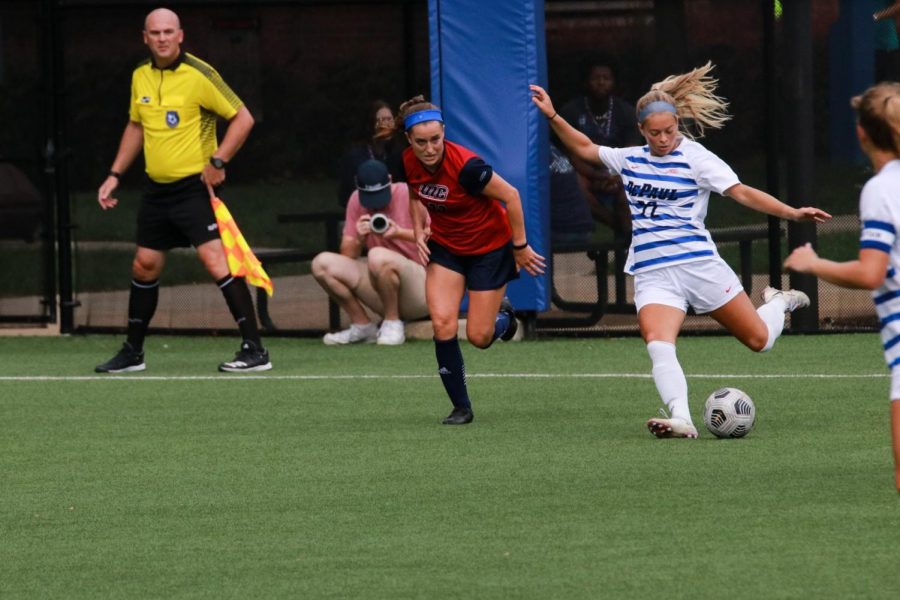 Sophomore defender Grace Phillpotts clears a ball on Sunday against UIC. The Blue Demons shut out the Flames 3-0.

Both teams came out demonstrating a physical presence on the field, but the Lady Blue Demons controlled the first half with 3 goals. Graduate Student Morgan Turner scored the first goal and Sophomore Beth Smyth was awarded the assist 15 minutes into the game.

Smyth followed her assist with a goal of her own assisted by Senior Sydney Parker midway through the first half. Turner and Smyth reconnected for their second assist-to-goal experience of the game before a lightning thunderstorm caused a 30-minute precaution delay.

The second half consisted of numerous corner kicks and continued aggressive play, but a scoreless half gave the Blue Demons the upper leg in the crosstown challenge.

O’Brien praised her team for their aggressiveness and ability to capitalize on goal situations.

“I thought we came out with an unbelievable, aggressive mentality that kicked us off in scoring three goals within the first 22 minutes of the game,” O’Brien said. “I thought that was awesome.”

The team scored three goals on 20 shots. Smyth’s goal was her first goal of the season. However, she was more excited in being able to contribute to the team through assists, which led to both of Turner’s goals.

“When I saw Morgan score there was happiness seeing the ball go to the back of the net. I screamed in pure joy, running to her and hugging her because she deserves it for all goals she scored.”

Although Turner contributed four shots with half of her shot equating to two of the team’s goals, she admitted that the team as a whole wanted to score as many goals as possible, but could’ve capitalized on more opportunities while learning a new offense, areas they want to improve in the coming games.

“We still left a few chances on the field that we definitely are motivated to finish in the next few games,” Turner said. “[We] are learning how to play offensively in this formation because this is new this year, so a lot of us are playing in new positions and we are still adjusting to that.”

The Blue Demons play on a two-game road trip at Milwaukee on Sept. 2 and at Michigan on Sept. 5 before participating in the Red Line rivalry at home against Loyola Chicago on Sept. 9.