Restaurants near campus eager for return of students 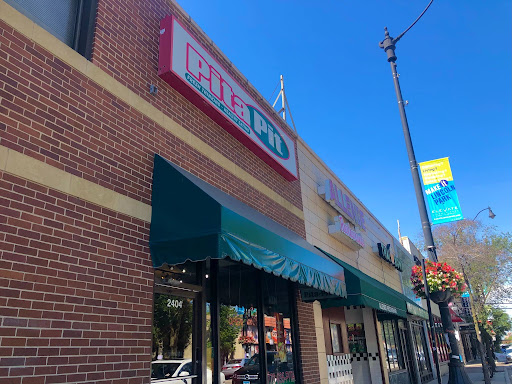 Pita Pit, located at 2404 N. Lincoln Ave. in Lincoln Park. Pita Pit lost close to 50 percent of its business during the pandemic.

In the past week, DePaul’s campus has come back to life: For the first time in nearly two years, students crowd sidewalks between classes, groups of freshmen aimlessly roam Fullerton Avenue looking for parties and students return to their favorite spots to grab a bite.

No one is more excited for the revival of student life than local restaurants. A year of virtual learning and social distancing took a toll on restaurants near DePaul. Now, locals are seeing students’ return to campus as a sign of the return of a pre-pandemic local economy.

Roberto Armando, owner of Dog Haus’ Lincoln Park location, said his franchise is, well, out of the dog house.

“It’s only been two weeks, and I can’t begin to tell you how positively impactful it’s been,” Armando said. “As far as our sales [and]crowds, for the first time, we’ve had students, Labor Day weekend. It’s like the perfect storm of amazing for us.”

Armando said sales were okay before students came; now they’re better than ever in the location’s three and a half year history.

Many of DePaul’s 20,000 students never stepped foot on campus during the 2020-2021 school year, with classes held almost entirely online all three quarters and a greatly reduced occupancy in on-campus housing.

Zeyad Sbeih, owner of Pita Pit on Lincoln Avenue, said the decreased student presence in Lincoln Park resulted in a loss of around 50 percent of his business.

“We’re right by campus, and then a lot of students live this way,” he said, gesturing to the area west of Halsted. The lost foot traffic from students in the area forced him to cut costs.

“I cut my hours and cut staff,” he said.

Sbeih fired seven people — a lot for a small business. He also saw a drastic decrease in catered events.

“[We lost] most of our catering,” he said. “We did two or three events every day. Then it fell to two or three a month.”

“Last fall, it was, like, dead in here,” said Lilly Burmett, a shift lead at The Bagelers Coffeehouse.

A year later, business is very much alive.

“Now we’re having to increase our restocks,” Burmett said. “Since this time last year, we’ve had a 35 percent increase in gross revenue.”

Burmett says she sees the most difference in business during traditional “off” hours, in between the morning and lunch rushes.

It wasn’t easy to get to this point: For local restaurants, the past year and a half has been marked by pivots, changed plans and new concepts for these restaurants.

Both Pita Pit and The Bagelers saw more online sales through delivery apps like Grubhub and UberEats than in-person sales for a while.

For The Bagelers, success would mean straying away from the delivery apps they leaned on to get through the pandemic.

“We did all the delivery apps for a while,” Burnett said. “Now we’re back to just UberEats and our own delivery service.”

Armando attributes his Dog Haus location’s survival through the pandemic to delivery orders, too.

“The majority of our business is through delivery,” he said. “I’d say about 70, 75 percent are pickup and delivery.”

“Even before Covid, things were not very bright under this roof,” Armando said. “I expanded our hours, and the programs I put into place because of Covid have generated business.”

Dog Haus also runs regular student deals in the hopes of drawing in even more DePaul students. These deals helped them survive through the pandemic, Armando said, and even thrive as they drew in business with deals like half-off food after 6 p.m. on Mondays. He hopes to continue student deals for those 21 and older as he looks to expand a bar at the restaurant.

“We’re so close to the students,” he said. “We’re hoping to get even better with our bar business.”

“Now we’re back to four or five [catered events] a week,” he said.

Through the pandemic, many Chicago restaurants closed, including the beloved late-night grub spot Devil Dawgs, who told Fox-32 in December that they lost their lease, in part due to Covid.

Also shuttered during the pandemic were Royal Indian Grill, Rickshaw Republic, Le Pain Quotidien and Centre Street Kitchen, among others, as The DePaulia reported last year.

By the end of 2020, 415 Chicago restaurants had closed due to the pandemic, according to CHD Expert, a global data-tracking service for the food-service industry.

Even with a solid return for these restaurants with the return of students, Covid-19 and its variants may present more challenges in the future.

Sbeih remains cautious: “It’s only been two days, so it’s hard to tell so far … It’s coming back, but it’s not the same. [The Delta variant] is what everybody’s worried about.”