An Old Dilemma in the New Year for Jewish Students 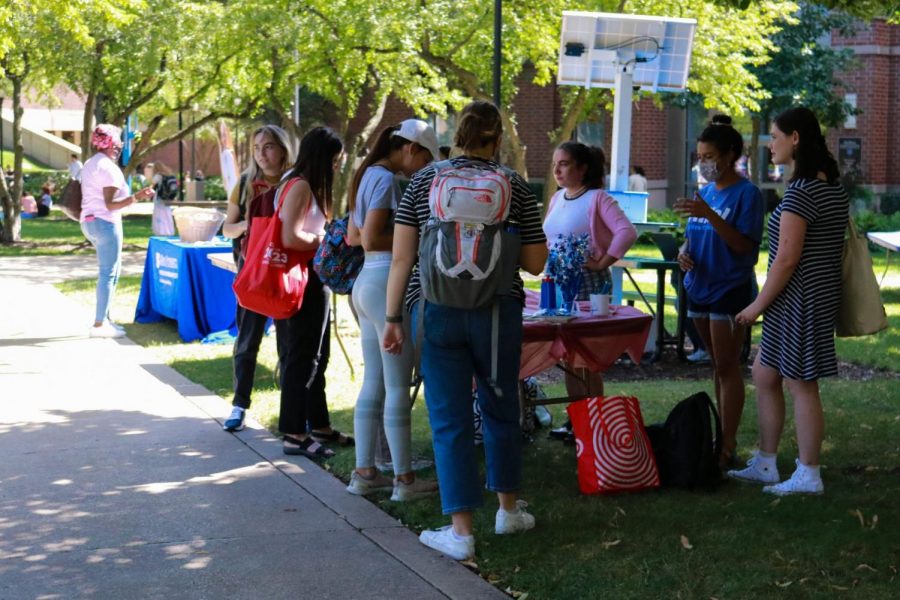 DePaul students stop at the table for the DePaul Center for Jewish Life at the Involvement Fair on September 8, the first day of autumn quarter.

Jewish tradition holds that on Rosh HaShana our destiny for the coming year is written. For many Jewish DePaul students, who make up 4 percent of undergraduates, it has already been chosen for them – we are being written out of the community.

This year, the first day of classes for DePaul students landed on this deeply important day. Somewhat ironically, Rosh HaShanah is also the day of the Involvement Fair that centers around religious and cultural groups. The result is that many Jewish students who are interested in being involved Jewishly on campus, cannot attend the fair because they are observing the Jewish New Year.

Though this scheduling error was presumably a mistake, it did not go unnoticed by the community as something that could have been done differently.

“Well for me, I had a music school audition on the first day of Rosh HaShana and started school on the second,” Hillel Student President Priya Fink told The DePaulia. “So it just makes it a little tricky to maintain the focus of my non-Jewish colleagues when I know there’s something really important happening at the same time. As for the Involvement Fair, it’s sort of disappointing considering there were 5 other days they could’ve had religious orgs but they chose to have it on Rosh HaShana.”

By starting school on such an important day, DePaul has put Jewish students in an awkward situation that could have been easily avoided. For many, this is a reminder of the annual struggle Jewish students face across the country and have dealt with for their entire academic careers.

However, as crucial as a statement is, it’s the actions behind it that matter the most. This week is the two-day Jewish holiday of Rosh HaShana, the Jewish New Year and one of the most important holidays of the Jewish calendar during which Jews spend time with family and friends, and often attend hours-long synagogue services. More observant Jews do not use electronics and observe various other laws and traditions. Hillel, the Jewish student organization, offered everything from holiday meals and shofar blowing (a ram’s horn that is blown in synagogues on Rosh HaShana throughout the preceding month and at the end of Yom Kippur), to opportunities to learn together for students to celebrate the holidays together.

While DePaul has published their support of Jewish students, and students of all religions, decisions like this  put that claim into question. In his July 18 email, President Esteban quoted DePaul’s mission statement and said, “According to our mission statement, as a community, ‘we recognize the intrinsic ethical connection between dignity and diversity as a natural and necessary context for human flourishing, and thus we strive to be a welcoming and inclusive educational community that cultivates these important values among ALL persons at DePaul.’ Let us stand together against antisemitism and against all forms of discrimination, prejudice, hostility or violence against any members of our community.”

What I want to know is how does imposing an ethical burden on Jewish students evoke the ideals of welcoming and inclusion and reject the very discrimination that President Esteban stands against? What does this decision forecast for the first year students as they embark on their journeys at DePaul?  And maybe most critically, are Jews welcome or merely tolerated at DePaul?