With most votes counted, Rauner, a wealthy venture capitalist, has a 49-45 percent edge against the governor in what was considered one of the hot gubernatorial contests in the country. Rauner won every county in the state besides Cook, where heavily Democratic Chicago dominates.

“This victory is for our students, our children who deserve the best schools in America,” he said. “And this is a victory for our citizens who deserve a government without corruption and giving term limits on our elected officials in Springfield.”

Throughout the campaign, Rauner ran against Springfield and its perceived corruption, tying Quinn to imprisoned predecessor Rod Blagojevich as well as powerful House Speaker Michael Madigan (D-Chicago), who’s held that position for all but two years since 1983.

The governor-elect, however, struck a conciliatory tone, as well by mentioning how the state elected a divided government that would have to work together to find solutions. 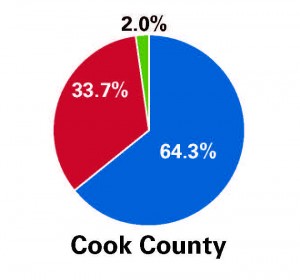 This, however, is still very much in question. Despite Rauner’s victory, Madigan and Senate President John Cullerton (D-Chicago) maintained veto-proof majorities in their respective chambers of the legislature.

This effectively limits Rauner’s ability to enact his agenda while ironically putting him at the mercy of Madigan, a man he made the poster child of everything wrong with state government during the campaign. 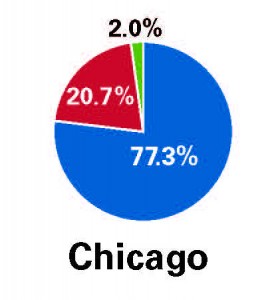 Though Rauner tried to link the governor to Madigan, Quinn himself was often given the cold shoulder by the speaker with many of his initiatives being either delayed or not even considered.

Quinn, however, is determined to act on an important principle of his campaign before leaving office by signing an increase in the minimum wage into law. This came as the somber-looking governor conceded the race the day after Rauner declared victory.

“I really look forward to working with the legislature in the time I have left as governor to get that job done,” Quinn said. “I think it’s an important mission for all of us to do right by people who work hard, who work
40 hours a week, who do everything according to the rules — they shouldn’t have to live in poverty.”

Despite the approval of Quinn and a supermajority of voters, it is not clear if this will get through during the legislature’s lame duck session. Spokespeople for both Madigan and Cullerton have been noncommittal.

Besides the minimum wage, Quinn essentially said that he will leave other matters such as the budget and taxes to the new administration. To begin the transition, Quinn appointed his chief of staff to serve as a liaison to the incoming administration, while Rauner has appointed members to his transition team.

What issues should we expect to be taken on?

An issue the incoming administration will have to deal with right away is the income tax situation. Barring no action, the five percent individual income tax as well as the 7 percent corporate rate will roll back to 3.75 percent and 5.25 percent respectively on Jan. 1.

Though Rauner has expressed his desire to get rid of the Quinn-passed increases completely, Democrats and even some Republicans agree that the state would not be able to handle the loss in revenue given the dire condition of state finances. In an interview on “Chicago Tonight” before the election, Comptroller Judy Baar Topinka (R-Riverside) likened it to giving the state a heart attack. Credit agencies have also said that it could further hurt the state’s already teetering bond rating.

Rauner’s camp has talked of phasing out the rate over time to prevent the shock that the loss in revenue would ensue. Any action on taxes will be retroactive, however, as Democrats have indicated that they will not take the politically risky vote to extend what was supposed to be a temporary tax increase until the governor-elect is in office.

Another priority thrown at Rauner right away will be a budget proposal, which he is required to submit by the third Thursday of February. While the pension reform bill was signed into law last year, the state still faces a structural deficit and a backlog of unpaid bills.

Though Rauner has been short on specifics so far, one point he emphasized in dealing with these problems was an overhaul of the state’s tax code. Regardless, the economy and state finances will be the main items on the governor-elect’s to-do list.
Postscript: How Rauner won (or how Quinn lost)

Looking at the map, Illinois looks really really red. Just by looking at it, once may assume that Rauner won in a landslide. It’s a little more complex than that, however, as Quinn won in 2010 with a similar-looking map, believe it or not.

What really did Quinn in was a mix of low turnout in Chicago and an extremely poor performance in the collar counties. The governor did not need to win the counties surrounding Cook County (he didn’t in 2010), but he needed to keep Rauner’s margins down, which he quite obviously could not.