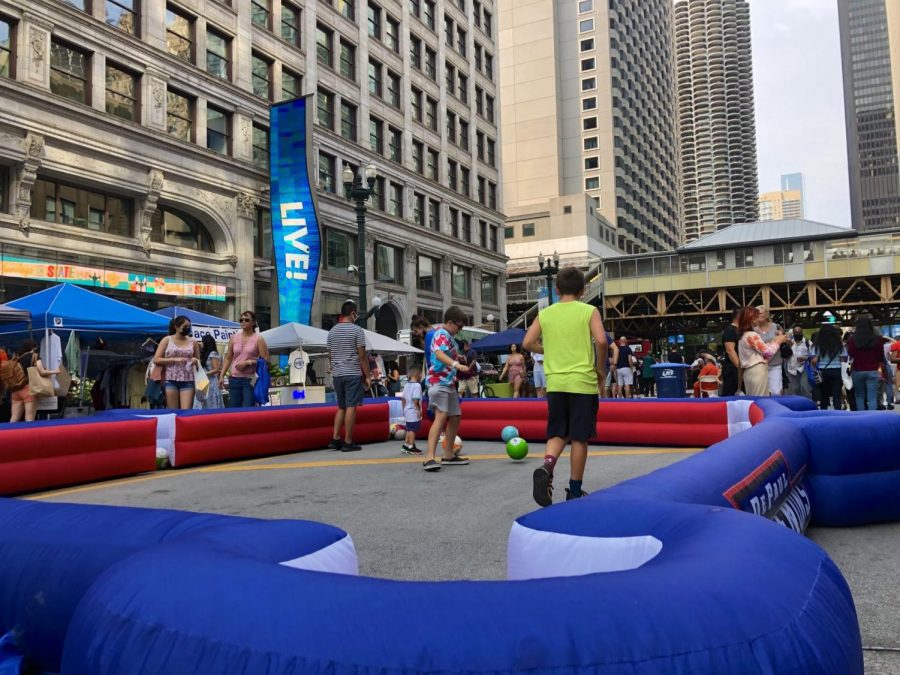 Kids play in the DePaul sponsored area of Sunday's on State.

Chicagoans from all over the city gathered for the last Sunday on State, an open streets event stretching from Madison to Lake Street.

The event was free and open to the public and has been held on eight Sundays throughout the summer.

“We’re thrilled to be bringing this joyful event series to the Loop’s most iconic street — State Street,” said Chicago Loop Alliance President and CEO Michael Edwards. “This is not going to be your average street fair; we’re throwing an interactive block party for the whole city and beyond to enjoy, with activities and spectacles that run the gamut of age and interest … After the year we’ve had, we want to offer an opportunity to come together, participate and heal with one another.”

Sundays on State provided an opportunity for local vendors to showcase their work to people from all over Chicago.

“I manage 12 vendors,” said Sylvia Moore, who sells jewelry at her pop-up, Sylvia’s Back Room. “A lot of them are mature adults, so this is a great opportunity for them.”

The vendors she manages go to Sundays on State on a rotating basis. “They all really want to be here,” she said.

DePaul University was present at the event, with an extensive setup with an Admissions booth and complete with music, inflatables, free tote bags and pins, cornhole and photo ops with mascot Dibs.

Sabrina Wilson, a senior international studies major at DePaul, worked the event for the university. She said she hadn’t actually heard of the event until the day of, but was very happy to be there.

“It’s been so nice, especially after the Covid year,” she said.

Wilson and Zoe Parris, a DePaul sophomore and a journalism major, were handing out free bags and interacting with the lively attendees.

“It’s like a huge block party … This was a game we were running, and now the kids are just playing,” Wilson said, pointing at a group of kids playing soccer. “We’ve been seeing people vibing all day … There was a guy dancing here for three hours.”

“It’s the first time I’ve seen people out and about like this,” she said. “It’s a good way to start the school year, and a great thing for small businesses.”

Woodlawn resident Nicold Pittman runs a homemade jewelry and accessories pop-up shop called Twenty Thou, in honor of the number of pieces she hopes to one day sell.

“I’m here to share my creations with downtown Chicago,” Pittman said. “I’ve been making jewelry for around 15 years.”

Sunday on State has given her an opportunity to share her work with a broad range of people, gaining much-needed business after a slower year thanks to the pandemic.

“I’m out almost every weekend, until the pandemic,” she said. “Then, I mostly sold online.”

Pittman sold her jewelry at three Sundays on State.

“[Business] has been really good,” she said. “It was a really great idea.”

The event is free of charge to vendors, which means it can be hard to find a spot.

Barber Jacobi Winfrey from Hyde Park brought all his stuff to set up, but couldn’t find room for his tent, chairs and equipment.

“We couldn’t get a spot,” he said. “Hopefully they do this next year. It’s a fun event.”

Winfrey chose to make the best of the day by hanging out, enjoying the atmosphere and playing a balancing game with circus performers.

Danny Sullivan is an actor hired to MC and announces the event’s main stage. He said he’s loved working the eight Sundays of the event and has been able to meet performers he’s long been a fan of, like Lil’ Ed, a blues guitarist.

He said the crowd gives him energy, in turn: “I love my family and friends, but I miss being in a crowd of strangers,” he said.

Sharlene Cook, from Oak Lawn, attended Sundays on State with The Acting Workshop Chicago, an Englewood-based nonprofit that provides programming and events for Chicagoans of all ages. At Sundays on State, the organization hosted a game called “Name that Flick,” where audience members guess movie titles based on one-liners from the film.

“The audience loves it,” Cook said. “I play someone in the audience.”

Cook was enthusiastic about the event.

“Look at the different areas, kids, people. We’re in the dregs of summer … Coming through the pandemic, this is like, ‘Yes!” she said.

“It would be Chicago blasphemy if I said it was better than Taste [of Chicago],” she said. “But…”