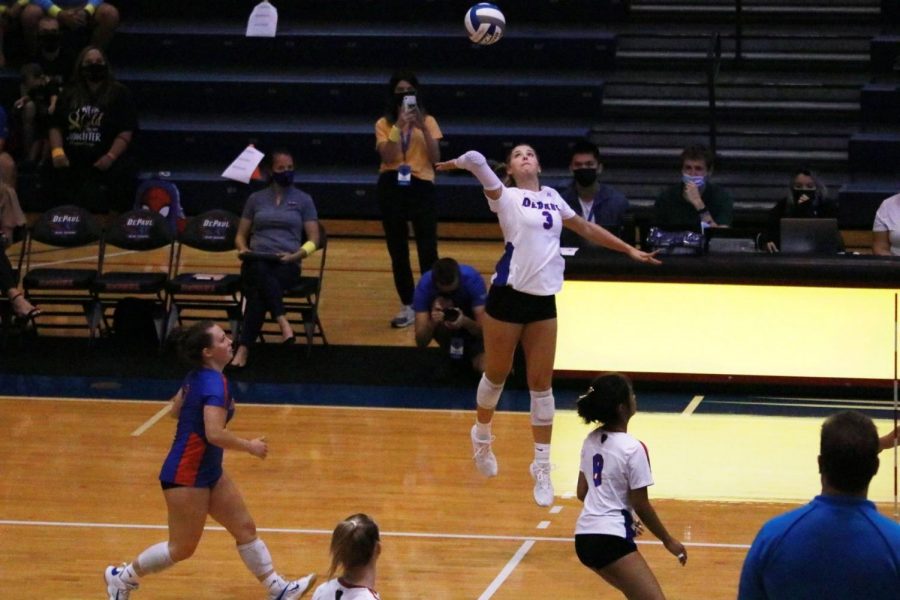 The stands were full, the crowd was loud and the anticipation was high as DePaul volleyball played at home for the first time this season at the DePaul Invitational last weekend.

The Blue Demons played in empty arenas with no fans and played the first six games of the season on the road last spring. The DePaul Invitational, which took place on Sept. 10 and 11 at McGrath-Phillips Arena, was the team’s first time playing in front of fans since 2019.

DePaul took on the University of Akron in their first match of the weekend but lost 3-2 in a tight match that needed all five sets for a winner to be decided.

The next morning, the team had a rough start, and a combination of offensive and defensive errors allowed the University of Pennsylvania (Penn) to win the first set of the match 25-18.

However, the Blue Demons responded with vigor in the second and third sets. Penn started strong both times, but DePaul bounced back due to hard work from both the offense and defense, led by outside hitter Jill Pressly and Rachel Krasowski.

The teams were evenly matched in the fourth set until the Blue Demons went on an eight-point scoring streak that helped them win the match 3-1 for the team’s first win at home. Pressly had 24 kills in the entire match, while outside hitter Hanna Karl had 13 kills and 12 digs alongside Krasowski with 18 digs.

“We have had a couple of really tough matches where we’ve battled but we haven’t had the result that we have wanted, and we’ve been very close,” head coach Marie Zidek said. “So, to be able to battle and then to actually add the win to that battle feels really good.”

“After last night, we needed to show the fans that we’re here, we’re here to win,” Pressly said. “And just having our first home win, it was great for me. I have never experienced that before with fans, so I’m really happy for the team and how each of us played.”

The Blue Demons fell to Oakland University in the final match of the DePaul Invitation. Despite winning the first set, Oakland overpowered DePaul in the following three, resulting in a 3-1 loss for the Blue Demons.

The team began the regular season on Aug. 27 at the CEFCU Invitational. There, the team fell 3-1 to Southeast Missouri State, despite 18 kills and 20 digs from Pressly and 28 digs from Krasowski.

The next morning, the Blue Demons were victorious over Central Michigan University. Outside hitter Jill Pressly had 12 kills and 12 digs, while libero Rachel Krasowski had a match-high 24 digs.

In their victory against Bradley University, Pressly tallied 13 kills and 20 digs, while middle hitter Donna Brown had 10 kills. In the back row, Krasowski had 11 digs to help keep Bradley from victory.

Due to their performances at the CEFCU Invitational, Krasowski earned the title of Big East Defensive Player of the Week and Pressly was named to the weekly honor roll for the week on Aug. 30.

The team carried their win streak into the Tru By Hilton Dayton Invitational on Sept. 3, where the team defeated Marshall 3-2. Pressly had 19 kills, while right-side hitter Emma Price had 12 and Brown had 10. In the back, Krasowski led the team with 27 digs.

DePaul’s winning streak ended the next day, however, when the Blue Demons fell 3-0 to Ball State on Sept. 4. The team went on to lose to Wright State 3-1 later that night, although Krasowski had 24 digs in 16 straight games in which she reached double digits in digs.

Following her performance at the tournament, Krasowski was named to the weekly honor roll on Sept. 6; her second straight week being honored by the Big East.

“It felt really good [to earn the honors], honestly,” Krasowski said. “I’ve been working hard, my teammates have been pushing me inside and outside of the gym, and I couldn’t really do it without them. Just their support in general and them having my back as well.”

The Blue Demons go back on the road next weekend to Northwestern University for the Chicago Cup, where they will play local rivals Northwestern, Loyola Chicago and University of Illinois Chicago on Sept. 17 and 18.

Following the DePaul invitational last weekend, the Blue Demons go back on the road with a record of 4-5 on the season. The team will travel to Northwestern University next weekend for the Chicago Cup, where they will play…