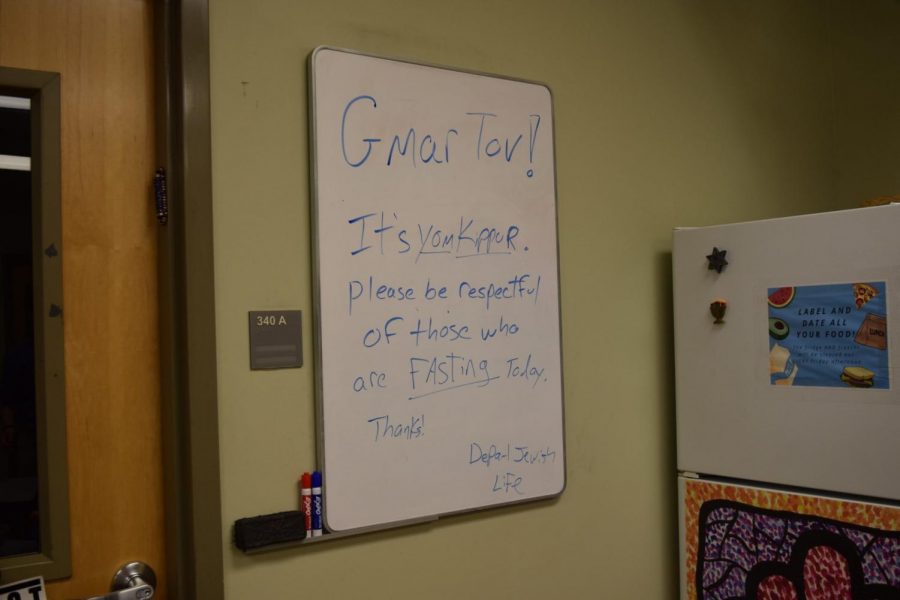 Brady Safenovitz and Sophia Klevit sat on a couch in the DePaul Jewish Life office, talking and killing time between classes and work, this past Thursday.  It was Yom Kippur, the Day of Atonement for those in the Jewish faith, and the office was almost empty.

“Only three hours and fifty-six minutes left of fasting,” Safenovitz said as he plopped down on the couch and put his feet up. “But who’s counting?”

Like many in DePaul’s Jewish community, Safenovitz and Klevit were observing Yom Kippur, a High Holiday in the Jewish faith. For them, it meant fasting from sundown on Wednesday to sundown on Thursday. Observance varies by denomination, with Conservative and Orthodox traditions trending toward abstaining from work, school and using electronic devices while attending prayer services throughout the day.

“I’m kind of between Reform and Conservative [Judaism], so I don’t eat or drink water, sundown to sundown,” Safenovitz said. “But I’m going on my phone. I had class today, so I was on my laptop, taking notes. It actually helps for me as a distraction from not eating and drinking.”

“Something I really appreciate about Metro Chicago [Hillel] is its thoughtful programs for a lot of reflection during the High Holidays,” Priya Fink, president of DePaul Hillel, said.

Yom Kippur began Wednesday night, September 15, with an opening prayer, Kol Nidre, and service. As one of the holiest ceremonies of the year, people ask for forgiveness for breaking promises or commitments left unfulfilled in the previous year and confess their sins. It signals the end of the 10-day period of forgiveness and reflection after Rosh Hashanah, the Jewish New Year.

“A big part of Yom Kippur and the High Holidays is reflecting on the year and starting fresh in a brighter and more positive way than the past year,” Fink said. “This year, there’s a lot that people want to leave [behind].”.

The decision to go about a normal daily schedule during High Holidays is a deeply personal decision for observant Jewish people at DePaul. Though both Safenovitz and Kelvit decided to go to class and work, Barbara Schiffer, a junior at DePaul and intern with Hillel and the Jewish United Fund, decided the opposite. She was attending service at Chabad all day.

“It really does create this conflict for us,” Schiffer said. “Do we honor our religious obligations? Or do we go to class? It’s not a question that’s often asked of the general student body of DePaul.”

For some freshmen and sophomores, this marked their first Yom Kippur away from home.

“Where I’m from is a very densely populated Jewish area, like right outside Philly,” said Klevit. “So on these holidays, we would always have off … [and] we could get extensions for our work. But adjusting here is a little bit hard because it’s not as widely talked about.”

DePaul has no university-wide policy regarding absences for religious holidays, effectively leaving it up to individual professors. As most of her classes are on Tuesdays and Thursdays, Schiffer coordinated with each of her professors to miss class. Fink coordinated with a professor to leave class early on Thursday, though she couldn’t miss it entirely.

When Safenovitz’s three hours and fifty-six minutes were up, he broke his fast with “the best challah in the world” surrounded by friends at the home of a Rabbi in Lincoln Park.

“I like the whole aspect of being in a community on a very holy day,” Safenovitz said.

Through Hillel, Chabad and the Jewish Life Office, he is grateful to have found just that.