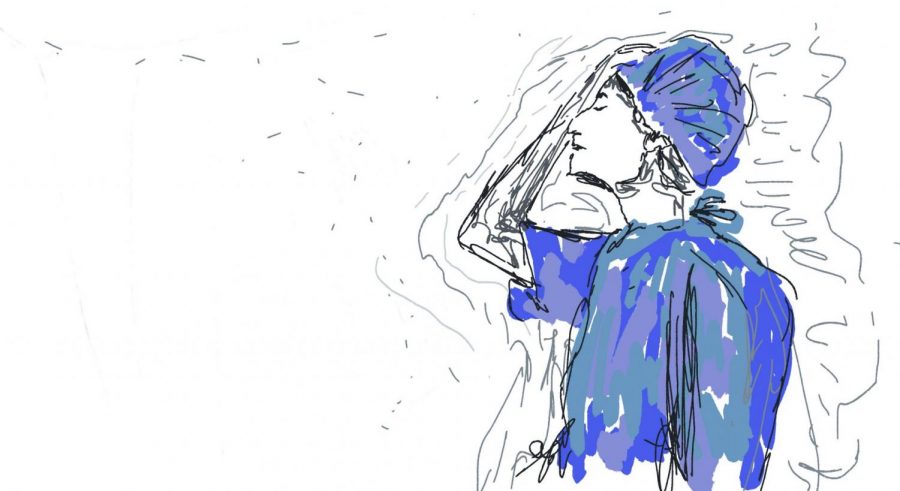 A long-lasting beep comes from a room. Nurses file in quickly. After a while, the nurses leave the room, giving no indication of what just happened except for a dull look in their eyes that gives everything away. Hours pass and once again there are sounds, but much quieter than before. The sound of a zipper fills the room as a body bag is sealed. This is the sound of defeat to nurses and medical students around the world. Nursing graduate student Vanessa Herkert said the sound of the white body bag zipping reminds her of the first time she lost a patient.

Herkert is not alone in experiencing the death of a patient while pursuing her degree. Krupa Parmar, exercise science graduate student, said she experienced loss frequently since she started working in an emergency room.

“Surprisingly, there were more deaths than I would have expected, especially considering that I was only there once a week on Saturday mornings for typically four or five hours,” Parmar said.

Though these experiences can be quite traumatizing, Herkert and Parmar said witnessing a loss prior to attending medical and nursing school helped with preparing them to lose patients. According to a study by the American Journal of Hospice and Palliative Medicine in April, 65 percent of students in medical and nursing school have experienced a loss prior to or during higher-level education. The study claims this experience can make adjusting to losing patients easier than if the student has not yet experienced loss.

Herkert said she lost her mother in 2014 to breast cancer. Not only was it impactful in her personal life, but it also influenced her decision to become a nurse. Parmar said her biggest loss was the loss of her grandparents which helped in adjusting to the constant deaths in the emergency room.

While experiencing a death prior to medical or nursing school can help with accepting death and making the grieving process easier, the emotional connection students make to their patients can be difficult to manage.

Herkert said she was on a palliative care team where many young people were on the floor she worked on.

“Every Thursday was tumor boards, that’s when all the interdisciplinary teams — social workers, physicians, the palliative care nurses [and] research teams — we all came together [to share] updates on our patients,” she said. “I remember my very first one was actually about a patient that had passed away that was a favorite. He was a young adult and I knew of him because my roommate at the time was a nurse [who worked with him].

“I could feel the secondhand emotions. I’m sitting here listening to people who actually knew this patient who was an amazing person whose loss was huge. I will say that a loss, [whether it be] a secondhand loss or a direct loss, has never deterred me. If anything, these losses have helped guide me and provided me with direction and shown me what I value as a person and what kind of nurse I want to be.”

Parmar agreed — she said the connection to families of the patients in the emergency room made it difficult to lose a patient.

“What people in the field of medicine are doing is very personal,” she said. “We’re very oriented in the sense that [we are] dealing with real people. It’s very full of emotions. I think it provides a different perspective because, if anything, it makes you want to take care of each patient or each person along the journey that you’re interacting with on a more personal level because you might be taking care of a mom, a sister, a daughter or a friend.”

As a result of experiencing loss, many students look for a source of support during their grief. Geo Gonzales, clinical assistant professor at the School of Nursing, said via email students have various forms of support they can use at DePaul if they are grieving or are experiencing burnout.

“Each individual should deal with loss whichever way is best for them,” he said. “Some may prefer to grieve alone, while others may require more of a support system. DePaul, as a community, is supportive of each individual’s coping mechanism. However, we encourage everyone to reach out for help if they need to, and DePaul provides excellent resources in circumstances like this.”

Herkert said despite the losses nursing and medical students frequently experience, since 2020 many have witnessed the sound of long lasting beeps and seen the white body bags being carried out, not just the students in hospitals.

“During a time like this, like Covid, we experience the loss of our loved ones,” Herkert said. “There is a vastness of loss. The amount of people that have died is just so incredibly horrible. And for those that have not gotten [Covid-19] or survived or survived losing someone, we have also faced loss. Loss of independence, loss of jobs, loss of happiness, loss of normalcy, and I think that is something that should not be ignored. It’s totally valid. And there are things that are going to make it better, but when we talk about loss we have to remember that we are all experiencing it.”

As students witness loss during their education, the impact, as the study states, is significant and “may cause professional grief given this vulnerability.” But, the study gives hope to these students in its conclusion. The study claims, after analyzing the students after a year since the loss of a patient, the students improve significantly emotionally and behaviorally after time passes, resulting in only 25 to 40 percent of students having one negative emotional response compared to the several they felt immediately after the experience.