The Texas abortion law is scarier than you think 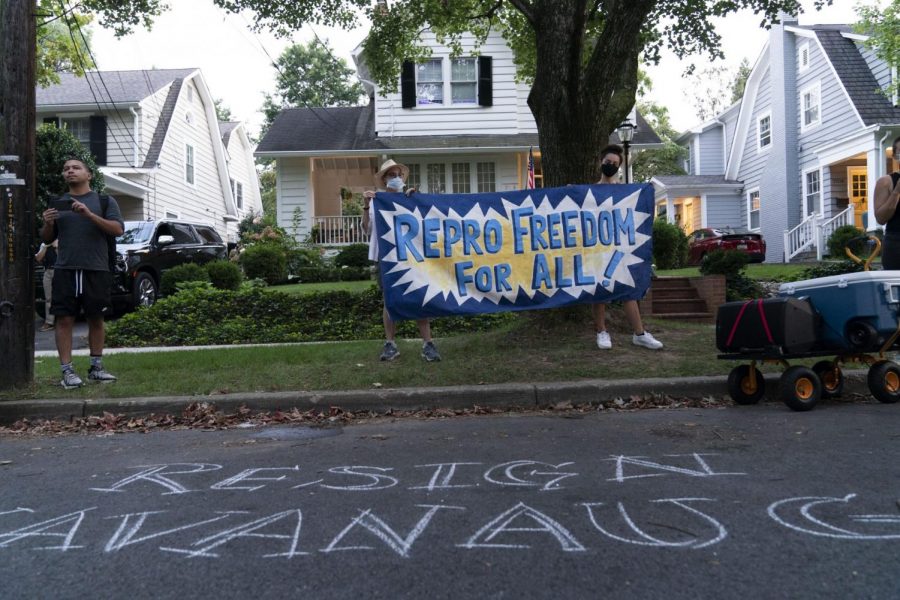 Abortion rights demonstrators rally outside of Supreme Court Justice Brett Kavanaugh's home in Chevy Chase, Md. Monday Sept. 13, 2021, after a high-profile decision earlier this month in which the court by 5-4 vote declined to step in to stop a Texas law banning most abortions from going into effect, prompting outrage from abortion rights groups and President Joe Biden. (AP Photo/Jose Luis Magana)

Texas now has the most restrictive abortion policy in the nation following the signing of new legislation by Gov. Greg Abbott, which officially took effect Sept. 1.

The law states that any pregnancy past six weeks cannot be aborted, and makes no exceptions for victims of sexual assault or incest. Perhaps most shockingly, the law functions completely on public policing, incentivizing private citizens to sue anybody in Texas who they suspect of “aiding and abetting abortions” past six weeks. There is also a $10,000 reward to any plaintiff who wins one of these lawsuits.

This is a catastrophic blow for women’s rights around the nation as other Republican-led states begin considering similar laws.

“This feels like a major red flag that we’re moving backwards,” said DePaul psychology professor Megan Greeson. “States are now willing to take unprecedented measures to curb women’s rights for an abortion. I really hope, especially when it comes to rape victims, that state legislatures can find it in their hearts to experience some compassion for what these women have gone through.”

Abbott has been careful not to call the measure an outright abortion ban, stating that it doesn’t force anybody to carry their pregnancy to term because “it provides at least six weeks for a person to be able to get an abortion.” In reality, this assertion is misleading at best.

At first glance, it may seem like a law restricting abortions so harshly would violate the Roe v. Wade Supreme Court decision. According to DePaul University constitutional law professor David Franklin, that is precisely the case.

But since it is not state officials enforcing the law, rather private citizens with the $10,000 bounty system, this makes it virtually impossible for the legislation’s constitutionality to ever be challenged. Franklin explains that this may be the most sinister part of Texas’ restrictive abortion measure.

“The way this works is that it makes it impossible for the abortion provider, say Planned Parenthood, to go to federal court and try to sue the usual defendants, which would be state officials,” Franklin said.

Normally, this would be how an abortion provider would be able to utilize the Roe v. Wade ruling to prove that the practice is constitutional. However, the Texas legislation clearly states that state officials are not allowed to enforce the law.

“The only person that Planned Parenthood could try to sue is some anti-abortion activist,” Franklin said. “So even if you win, there are a thousand others who are willing to try to get their $10,000 bounty.”

In practice, the Texas abortion law functions by drowning potential abortion providers in legal bureaucracy, should they attempt to challenge its constitutionality after being sued.

“The whole sinister plan of the Texas legislature here was that the mere threat of these lawsuits would put abortion providers out of business — and that’s exactly what has happened,” Franklin said. “By the way, you can get $10,000 from every single person who you think is involved in helping the person get an abortion, other than the woman herself. And the law says that the abortion provider has to pay the plaintiff’s legal fees if the plaintiff wins, but it doesn’t work the other way around.”

Additionally, plaintiffs can be from anywhere in the country, and can take an unlimited amount of Texas abortion providers to court.

This abortion restriction is menacingly designed to eradicate the practice statewide, in spite of Roe v. Wade and subsequent Supreme Court rulings. It is clearly unconstitutional, but can survive based on the civilian enforcement system that makes it impossible to challenge the constitutionality of the law.

Even pro-life activists, like Eric Scheidler, raised concerns surrounding the law’s execution. Scheidler is the executive director of the Pro-Life Action League, an Illinois-based organization committed to ending abortions statewide.

“The enforcement mechanism is so unusual, so novel, there is some concern that it could be used against us in the future,” Scheidler told The DePaulia.

While Scheidler was grateful to see the abortion industry “frantic and concerned,” he was skeptical of the civilian bounty system being used to keep the law afloat.

“What if the state of California were to pass a bill saying, ‘Well, we’re not banning people from buying guns, but we are going to empower citizens of California with the right to sue somebody that they suspect has bought a gun?’” Scheidler asked.

The Texas state legislature has masterfully crafted a bill that evades traditional concerns of constitutionality, laying the groundwork for other states to potentially follow suit. If this practice continues, Supreme Court precedents like Roe v. Wade won’t matter anymore. State governments can limit human rights at will using civilian enforcement mechanisms like Texas’.

That’s a scary future, and one that would dissolve citizens’ mutual trust in an already-polarized nation.