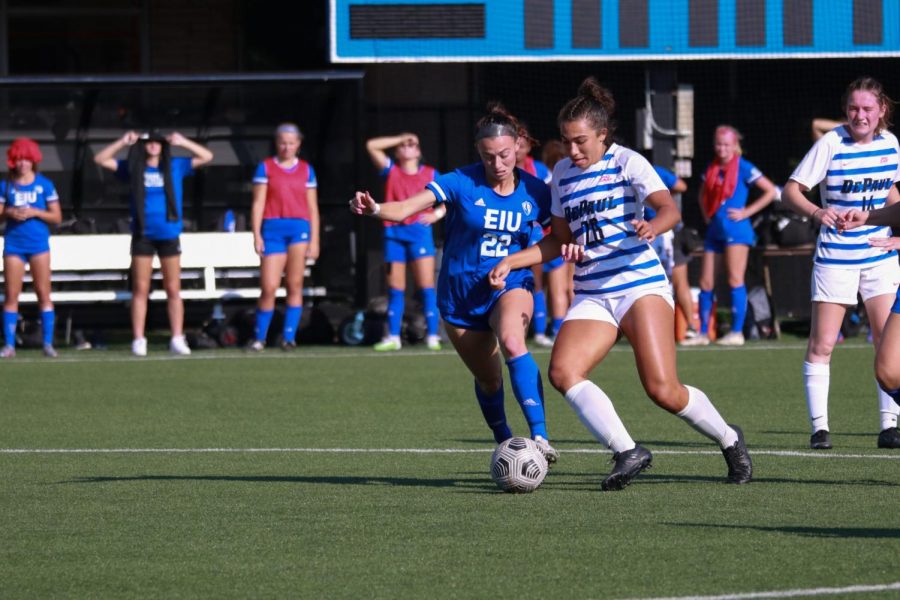 In front of alumni and former teammates, DePaul women’s soccer soared in a 3-0 over Eastern Illinois University on Saturday at Wish Field.

Before the game, the Blue Demons were coming off four straight 1-0 losses and had not scored a goal since their 3-0 win over University of Illinois Chicago on Aug. 29.

The Blue Demons started out slow and Eastern Illinois looked like the tougher team at the beginning of the first half. However, DePaul’s defense stayed strong and were able to keep Eastern Illinois’ offense away from goalkeeper Mollie Eriksson.

Defenseman Olivia Cooke broke the Blue Demons’ scoreless streak 43 minutes into the first half off an assist from Kristin Boos. The goal is her first as a Blue Demon after she transferred from University of Southern Florida last summer.

Carrying that energy from the goal into halftime, the alumni joined DePaul athletic director DeWayne Peevy, Senior Associate Athletics Director Jill Hollembeak and DePaul mascot Dibs on the field for a photo.

Following the halftime ceremony, the Blue Demons came out flying in the second half.

Boos added to DePaul’s lead five minutes in the second half with a shot in the top corner of the Eastern Illinois goal off a long pass from Grace Phillpotts.

“I think the second half was a much better performance from us,” head coach Michele O’Brien said. “And I think it showed that we were more physical and more dominant.”

Forward Morgan Turner secured the Blue Demons’ lead 67 minutes in the game with a header that soared past the Eastern Illinois goalkeeper into the low corner of the goal. Phillpotts assisted on the goal, her second of the game, to help make the score 3-0.

“All week we’ve been working on attacking, so it was really awesome to see that pay off,” Turner said. “I think that it was really great to just get some goals to go in the net because the last four games we’ve lost 1-0, so that’s been pretty tough, so I think to be able to turn the page like that was really great for us.”

The Blue Demons were not only able to break out offensively after struggling in their last four games, but they were also able to do it with alumni and former teammates cheering them on from the sidelines.

“The energy was high,” Boos said. “And it just gives you a bigger picture of this program and all the players who’ve put in the work before us to make it what DePaul women’s soccer is today.”

A recent 2021 graduate Bina Saipi was one of the alumni who was in attendance, and she could not have been more excited to come back and support the team and some of her former teammates.

“I think [Alumni Day is] something that DePaul does every year that’s so special,” Saipi said. “This is my first Alumni Day and seeing people in my class fly out to come here and older girls come back, it just makes me super happy.”

The Blue Demons conclude non-conference play with a 3-5 record. The team heads on the road to begin Big East play against St. Johns on Sept. 26 before playing Georgetown on Sept. 30.