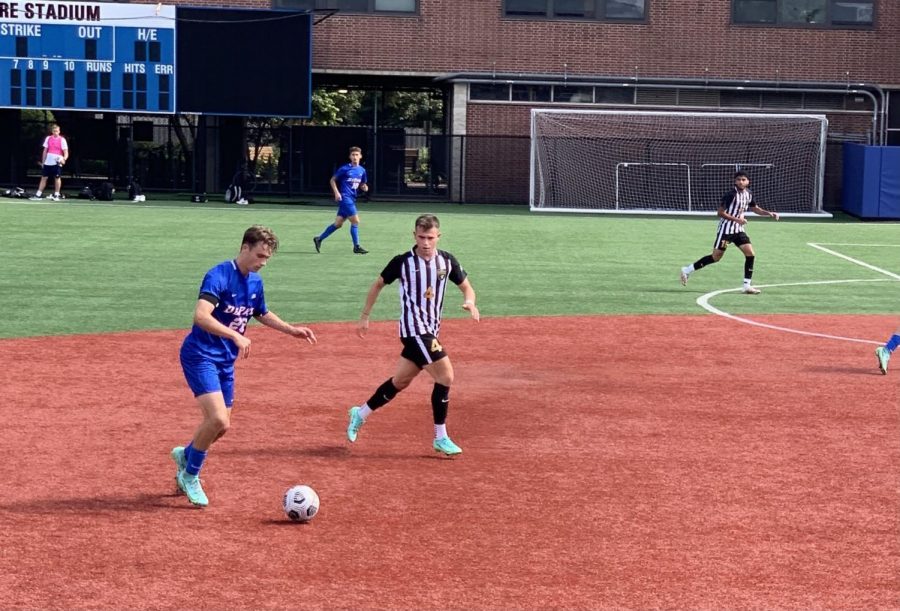 With alumni cheering in attendance, the DePaul men’s soccer team dominated in a 3-1 win over Oakland University at Wish Field on Saturday.

After winning three in a row, the Blue Demons fell to UIC 1-0 in an afternoon game at home on Wednesday. However, the team bounced back greatly in the win over the weekend.

Oakland looked like the better team in the first half, but it was DePaul who got on the board first when a shot from Santiago Rodriguez soared past the goalkeeper into the low left corner of the Oakland goal 41 minutes into the game. That goal is the second in his career after netting his first in a 3-1 win over St. Thomas on Sept. 2.

“It felt really good [to score], especially seeing all the guys that came back from last year,” Rodriguez said. “Went over and celebrated with them. Really great feeling. Second-career goal so it’s nice.”

As the excitement of a 1-0 DePaul lead carried into halftime, the alums of the men’s soccer team were honored on the field. The alumni that came to cheer on their alma mater had their names announced and joined DePaul athletic director DeWayne Peevy, senior associate athletics director Jill Hollembeak and DePaul mascot Dibs for a photo.

When the second half began, however, Oakland answered quickly as Noah Jensen scored a goal past DePaul goalkeeper Gandhi Cruz to tie the game five minutes into the half. The score remained tied at one for a majority of the second half.

When it seemed like the game would need to go into extra time to decide a winner, Jack Richards gave the Blue Demons the lead. He put a shot past the Oakland goalkeeper off an assist from Jake Fuderer with five minutes left in the game. With that goal, he now leads the team with four goals on the season.

“I didn’t think [the ball] would get to me,” Richards said. “But luckily I was just sitting at the back post and glad to see that it went in and went to celebrate with the fans.”

The Blue Demons got an insurance goal by midfielder Jacob Huth at the 87-minute mark when Huth maneuvered the ball past two Oakland defenders before shooting it past the goalkeeper.

The goal capped off the three-goal game for DePaul in front of their alumni, who celebrated with the team from the sidelines after every goal.

One alum who returned was former DePaul goalkeeper Drew Nuelle, who graduated in 2021 after playing three seasons with the Blue Demons.

“I love being here and it’s always different being in the stands especially since I played here,” Nuelle said. “It was nice seeing especially all the guys we’ve played with that started, that was really cool.”

Cruz, who took over for Nuelle when he graduated, faced nine shots on goal and made eight saves against Oakland.

“It was a tale of two halves, I would say,” head coach Mark Plotkin said. “I think Oakland kicked our butts in the first half, we did not come out ready. But I thought the guys really responded and thankfully Gandhi came up with a few big saves to keep us in the game.”

With a record of 4-2, the Blue Demons take on the University of Connecticut at Wish Field on Sept. 25 to begin Big East play before traveling to Northwestern for a mid-week game on Sept. 29.