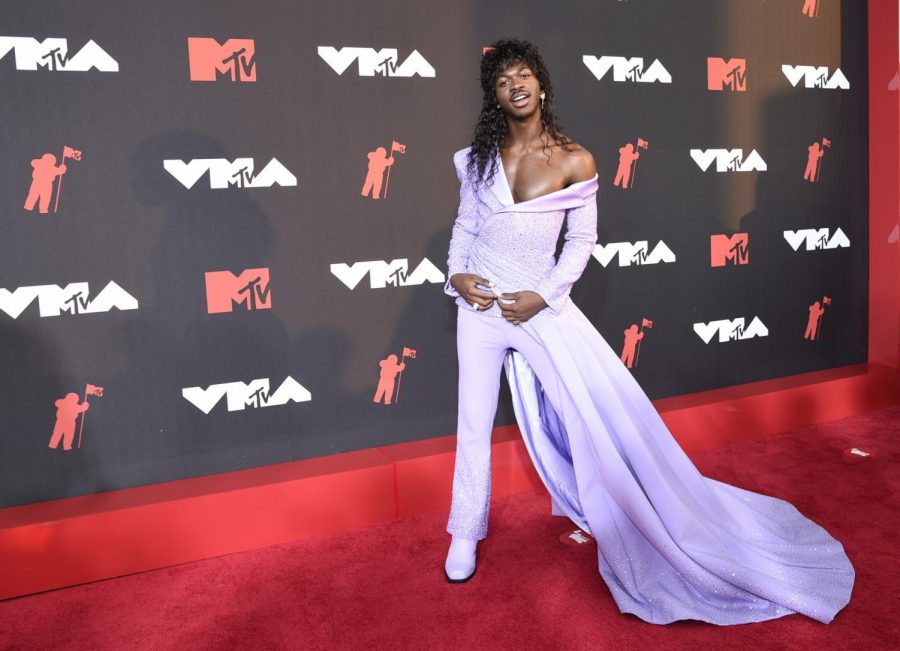 “Montero,” the highly anticipated debut album of Lil Nas X, finally dropped on Friday. The rapper announced the album with his prosthetic baby bump and “giving birth” when the album was officially released.

The album begins with the song with its namesake, “MONTERO (Call Me By Your Name),” a song that spawned a variety of controversies. For one, many people didn’t like that the rapper was giving Satan a lap dance throughout its music video. The rapper had also had a shoe collaboration where the shoe contained a drop of human blood.

On “Montero,” Lil Nas X doesn’t necessarily stick to one form of music. In some songs, he’s full-on rapping while in some songs he’s singing and giving us harmonies. His seven-song EP, titled “7 EP,” served as a preview of what was to come, as Lil Nas X didn’t restrict himself then, either.

The second song of the album, “DEAD RIGHT NOW,” has the rapper recalling the beginnings of his career. In the second verse, he mentions living in his sister’s house and dropping out of college in order to get his career off the ground.

With this song, he speaks about how people may try to switch up now that he’s gotten famous. He says, “Even though I’m right here by the phone, dawg // You know, you never call // Keep it that way now.”

“THAT’S WHAT I WANT” is the fourth song and it’s a heartfelt song with an acoustic guitar as its backdrop. Almost a ballad — not quite, though, with its upbeat tempo t — the song is a cry for love. Lil Nas X is belting out what he wants in a partner.

One of the most interesting parts of the album would be the 23-second spoken interlude in the middle of the album. “THE ART OF REALIZATION” has Lil Nas X admitting that he’s driving in life without much direction. At first, I didn’t realize that the interlude stood alone until almost a minute into the following song.

The production of every song gave them their individuality while also contributing to the collective album. The one thing that keeps this album together is the consistent presence of the guitar. There were other instruments as well, including the piano on “ONE OF ME” and the violin outro in “TALES OF DOMINICA.”

The guitar solos in “LIFE AFTER SALEM” gave life to the existential dread of the song. It was dark and somber and it spoke to the rapper dealing with the criticism and expectations of the public.

Guest appearances on this album gave in to Lil Nas X’s genre-bending project. The rapper had features from Jack Harlow, Elton John, Megan Thee Stallion and Miley Cyrus. Each feature gave its own personal vibe to the respective songs.

“INDUSTRY BABY” featuring Jack Harlow has the powerhouse of being the second hit of the album. The bass-bumping hit had trumpets and horns as their back-up with Lil Nas X raps about his accomplishments so far. Jack Harlow joins in, rapping about his own successes as well.

The beat on “SCOOP” featuring Doja Cat got me bobbing my head up and down. Doja Cat and Lil Nas X’s energy was amazing on this song. Both the rappers go on about their busy schedules and how hard they’ve worked. Megan Thee Stallion on “DOLLA SIGN SLIME” raps about her popularity and people being lowkey fans.

Elton John’s feature on “ONE OF ME” must have been him on the piano as his voice isn’t heard. The song has a chill, melodic vibe as the rapper addresses his doubters. “AM I DREAMING” features Miley Cyrus on this acoustic song — it begins with sounds on the beach. The harmonies throughout this sound were amazing and it helped end the album on a good note.

The album as a whole has Lil Nas X chronicle his various feelings surrounding fame. There are times of vulnerability, grand opulence and confidence. The rapper essentially leaves his heart on his sleeve. He admits that making the album was like therapy for him.

Lil Nas X has done it yet again with his debut album. He has given the public an album that doesn’t need any skips.