The underwhelming Met Gala of 2021 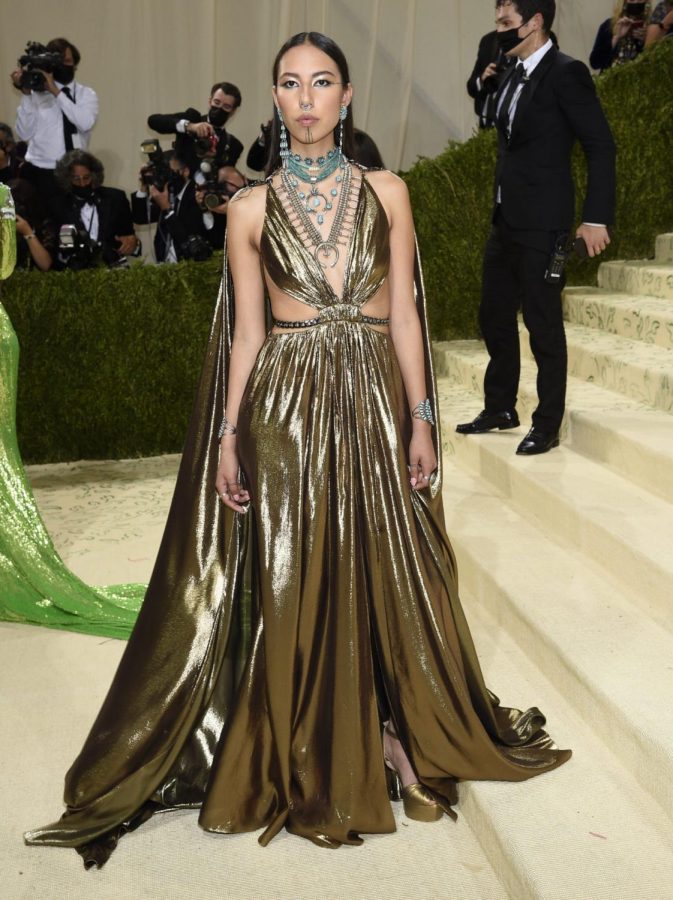 For the first time in almost two years, the red carpet of the Met Gala turned beige for this year’s theme of American: Lexicon of Fashion. With the exception of a select few, the theme seemed to be more of a suggestion than the main event for the red carpet.

The number of young celebrities has been steadily growing each year with a rise in internet stars such as Emma Chamberlain and Addison Rae. Some critics of these stars believe their attendance undercuts the prestige of events such as the Met Gala.

For an event renowned for its outrageous costumes and trendsetting outfits, the effort put in by most guests this year was underwhelming to say the least. A few celebrities understood the assignment. Jennifer Lopez, for example, decided that she would embrace the Western style in an earthy brown Ralph Lauren gown suited for a cowboy. Ciara wore a sequin Peter Dundras dress that paid homage to her husband’s team, the Seahawks. There was also Quannah Chasinghorse who highlighted  her indeginious roots in a Miss Navajo Nation Jocelyn Billy Upshaw’s collection.

It was more common to see a nod towards early Hollywood tropes. Most notably, Billie Ellish dressed in an extravagant Marilyn Monroe-inspired gown. The number of classic red dresses ranged in the double digits as celebrities ran with the idea of a classic theme.

Performative activism is very american so at least she’s staying on theme ! https://t.co/hPJq4vdmOi

Male attendees dressed almost exclusively in black suits and ties, regardless of the theme, with a few notable exceptions. Lil Nas X, in his three separate Versace gold outfits, dazzled the crowd as one of the few men to dress out of the basic attire, as well as Alton Mason in a custom Theophilia white and pearl outfit and Timothée Chalamet in a Haider Ackermann Tuxedo with white chucks.

For a couple of celebrities and well-known politicians, “American-themed” meant a push towards making a political or social statement with their outfits. For example,  New York Rep. Carolyn B. Maloney wore a suffragette gown that read, “Equal Rights for women.” Still, social media responses showed that many thought Cara Delevingne wearing a top with the words “Peg the Patriarchy ” and AOC wearing a white dress with the words “Tax the rich” in blood red were little more than performative activism.

While we were expecting a sighting of some of the most iconic celebrity Met Gala looks, a lot of those familiar faces were not there that night — Zendaya, Nicki Minaj and Beyoncé are just a few of the A-listers expected to dazzle the carpet this year. With a pitiful example of this year’s theme, people are questioning the future themes and hope for a more eventful Met Gala for 2022.