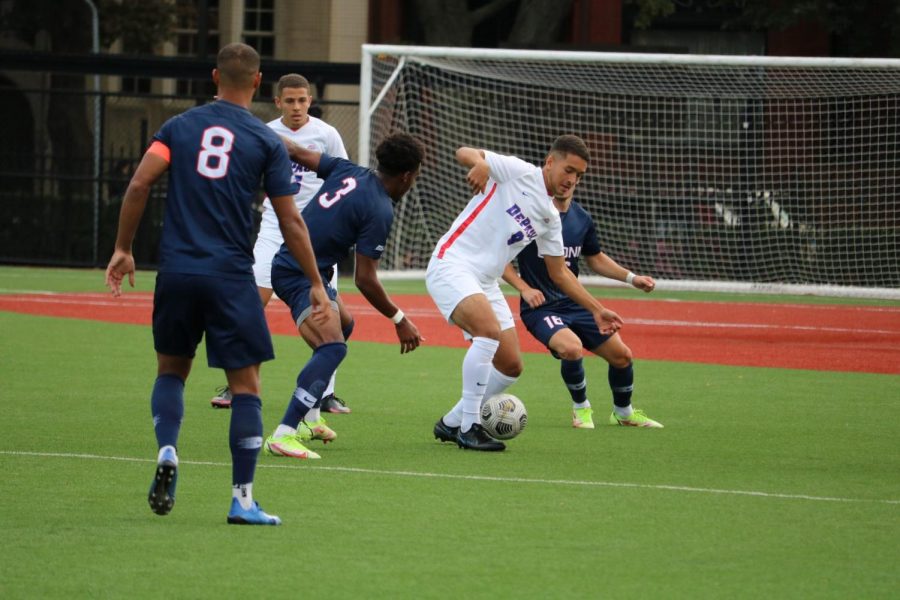 Midfielder Youssef Ramadan surrounded by Uconn defenders during their 2-1 win on Saturday.

The DePaul men’s soccer team defeated the University of Connecticut Huskies on Saturday, 2-1 after a late go-ahead goal by forward Marek Gonda. The Blue Demons improved to 5-2 on the season and came out of the game victorious in their first Big East conference matchup of the season.

“It was our first Big East game so there was always going to be some type of anxiousness and a little bit of excitement and jitters,” DePaul head coach Mark Plotkin said. “I thought we defended extremely well and settled into the game early on and scored the early goal. Our guys really stepped up and did a fantastic job today.”

The Blue Demons struck first and took the 1-0 lead seven minutes into the first half. Midfielder Nathaniel Enriquez scored off an assist from Kristian Malinich, who was playing in his second game of the season.

The goal resulted from a pass by Malinich that Enriquez headed past the goalkeeper and into the back of the net for the early advantage.

The UConn Huskies came right back and tied the game up just before halftime with 13:41 remaining in the first half with a deflection goal that rolled just past DePaul goalkeeper Gandhi Cruz into the back right corner of the net.

Just before halftime, Cruz made a tremendous save on a play that would have given UConn the lead before half.

Throughout the game, Cruz made multiple game-saving plays to help keep the Blue Demons in the game against a tough UConn squad. He showed immense awareness from start to finish and was a key factor in DePaul picking up the win on Saturday.

“I thought to myself that I need to do anything possible to get the job done and I think that is one of the biggest things that I like about playing the position I play,” Cruz said. “I think I just need to keep doing my thing and keep moving forward.”

There wasn’t as much action in the second half as both DePaul and UConn were locked in a defensive battle until Gonda scored the go-ahead goal with 10:16 remaining in the game.

“You know, a striker’s mentality is to follow through and I followed through and tapped it in and scored,” Gonda said. “I ended up scoring the game-winner and celebrated with the fans, it was a great feeling.”

Gonda’s goal against the Huskies was his fourth goal of the season. He is now tied with forward Jack Richards for the team lead in goals.

With a record of 5-2, the Blue Demons will travel to Northwestern University on Wednesday to take on the Wildcats with a chance to extend their win streak to three.