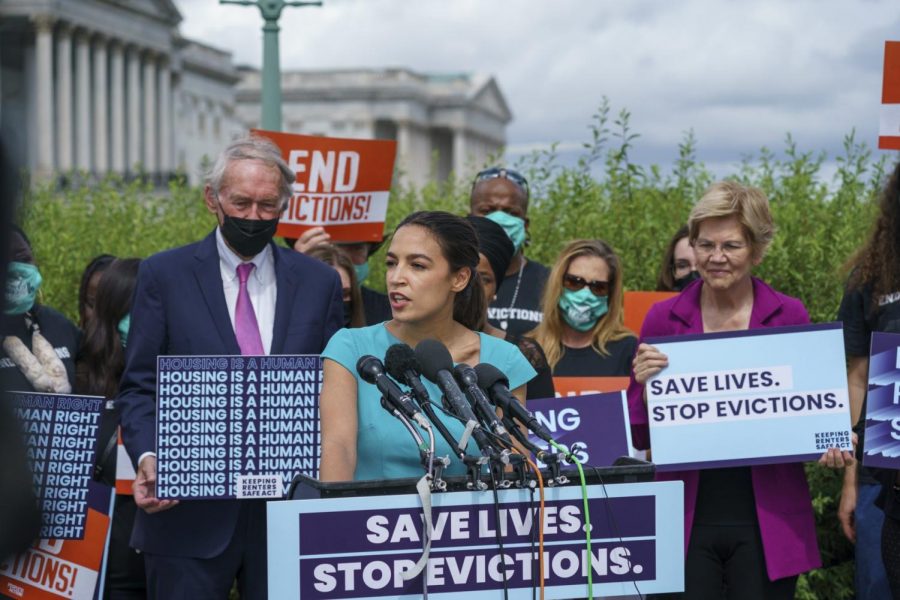 Rep. Alexandria Ocasio-Cortez, D-N.Y., speaks as she is joined by, from left, Sen. Ed Markey, D-Mass., Sen. Elizabeth Warren, D-Mass., and other progressive lawmakers to advocate for reimposing a nationwide eviction moratorium that lapsed last month, at the Capitol in Washington, Tuesday, Sept. 21, 2021. AP PHOTO

The New York congresswoman made waves on social media after wearing a dress that said “Tax the Rich” across the back for the Sept. 13 event at the Metropolitan Museum of Art. Ocasio-Cortez has been receiving criticism ever since, with many in the media calling her hypocritical for showing up to an extravagant event bearing such a message.

On one hand, I do understand the criticism. As a politician, Ocasio-Cortez is technically part of the wealthy capitalist elite. Thus, wearing a “Tax the Rich” dress to an event with a ticket price of $30,000 — much of which is tax deductible — could be seen as hypocritical or pandering to her working-class voters.

But conversely, maybe this was the perfect occasion for such a statement. The idea of raising taxes on the rich isn’t a new one, but the wealthy have rarely been pressed by members of their own social class on issues like this. Ocasio-Cortez brought income inequality to the forefront of their lives by criticizing them at the Met Gala, an event where the wealthy are effectively shielded from average Americans.

“It’s a great stage, you know. Eyes are watching,” Coya Paz Brownrigg said. Brownrigg is the interim dean at DePaul’s Theatre School, and has studied art and its impact on activism.

“I think she saw an opportunity,” Brownrigg said. “The reality is that AOC is a young woman of color, and she has been heavily scrutinized for what she wears… So why not sort of take her chance at making this bold statement about [her agenda]? It keeps her newsworthy, it has us talking, and so in that sense, it is effective.”

If Ocasio-Cortez’s goal was to start a discourse or bring awareness to the issue of income inequality, then she succeeded with flying colors. The number of articles, social media posts and memes that circulated about her Met Gala message was astounding. In fact, Google Trends shows that internet searches for the phrase “tax the rich” hit an all-time high the morning after the event.

Additionally, it seems disingenuous to call Ocasio-Cortez hypocritical for bringing light to this issue. Was she at an extravagant event? Sure. But that doesn’t mean she can’t produce commentary about the indulgence of the wealthy at events like this.

In fact, this seems to be a common argument against Ocasio-Cortez and other proponents of wealth redistribution. Critics tend to make ad hominem attacks against progressive politicians and activists to make them appear hypocritical, rather than debating their policy. We saw this in the 2020 Democratic presidential race, when Michael Bloomberg struck Bernie Sanders with the line: “The best-known socialist in the country happens to be a millionaire with three houses.”

We see this time and time again; progressive ideas are deemed worthless or hypocritical if they are touted by somebody from a position of relative power or privilege. Now, we are seeing the same argument made against Ocasio-Cortez.

“[It seems] that substantive arguments about her decisions are much rarer, and she’s definitely held to a different standard than lots of other people, including other people at the Gala,” Spencer Reed, regional field director of Bernie Sanders’ 2020 presidential campaign, said.

Cries of hypocrisy are further debunked when you consider that Ocasio-Cortez has been advocating for raising taxes on the wealthy since she assumed congressional office in 2019. A message like this shouldn’t be seen as simply pandering to the working class since it’s always been such an integral part of her platform.

“If she was not in a position or we had not seen her regularly addressing this issue, then I think it would become spectacle without content,” Brownrigg said. “But in this case, I think whether people like her politics or not, people can agree that she’s pretty committed to this issue.”

The more I think about it, the only reason the “Tax the Rich” dress irritates me is because of its necessity. As a prominent member of Congress, Ocacio-Cortez should have the power to make change. She shouldn’t have to advocate for it on the Met Gala’s red carpet. It’s disheartening that progressives in government need to rely on activism to push their ideas, particularly when the idea is so overwhelmingly popular. According to a 2020 Reuters poll, 64 percent of Americans supported raising taxes on the wealthy.

But with the government being dominated by conservative rhetoric, regardless of party, the few progressives must still rely on raising awareness of these social issues to make real change. As much as I would love Ocasio-Cortez and other progressives to make legislative change using their positions, activism like this might be their only option at the moment.