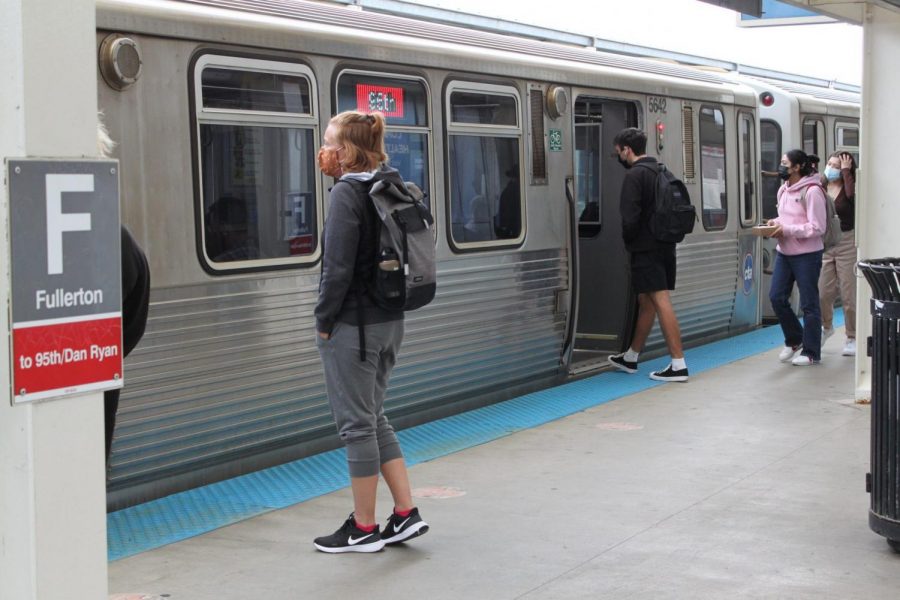 People board a red line train bound for 95th at the Fullerton stop.

It happened at the worst time, with my Trader Joe’s tote bag avalanching down my arm, balancing my coffee cup, keys, phone and wallet, and the laces of my right Nike lying limp on either side of the shoe and a daunting line of passengers gathering behind me as I fumbled to tap my U-Pass to the CTA bus card reader. What appeared on the little screen broke a bead of sweat on my hairline: “Insufficient Fare.”

Insufficient fare? Impossible. For four years, 10 quarters, nine school breaks in a row I’ve anticipated the first day of classes as the day that indicates it’s no longer necessary to add money to my Ventra account. The day that begins 11 long weeks of not budgeting for transportation. That day “Insufficient Fare” had no business flashing on the screen.

And yet, there I was on Sept. 8 in an impossible situation, pleading silently with the bus driver to let me on anyway.

Hoards of DePaul students in senior and junior standing have run into this issue since the start of Autumn quarter. For years, DePaul has automatically enrolled its full-time students in the UPass program, which allows unlimited rides on CTA busses and trains while school is in session for the cost of $105 per regular quarter, typically tacked onto their tuition and untouched.

Each term, students may request to opt out of the fee and disable their unlimited ride status for the duration of that quarter. Even throughout quarantine and mandatory online classes, this was the case. However, as of autumn session 2021, the first quarter many are returning to in-person classes, DePaul students were required to opt in to activate their UPass – otherwise, they were, like I was, unable to board trains and busses on the first day of classes.

DePaul’s decision to make this change on the first quarter back to in-person classes — as opposed to, say, when only online classes were offered — is confusing. The administration must have known that a greater number of students would need to use CTA transportation now versus last year when most classes were online. They must have realized that fewer people would remember to opt out of their UPass when unused during the pandemic than would need to opt in while beginning in person classes. However, when asked about the reason behind the switch at this time, DePaul’s UPass team, as well as the offices of Student Affairs and Undergraduate Admissions, did not respond.

“I don’t understand the logic in their decision,” Johana Macklin, a senior student who did not opt in to the UPass this quarter because she was unaware she had to, said. “Why would they have us opt in to something that we rely on so heavily at a time where it makes no sense to do so? Doing this added so much stress to my life the first week of school when I was already so stressed about not only starting school again but starting in person classes for the first time in a year and a half.”

Macklin relies on her UPass not only to get to school, but also for daily tasks that require transportation around Chicago, like getting to work, going grocery shopping, etc. She did not know that the administration was switching to the opt in system because she, like many DePaul students, does not use her DePaul email address as her primary email.

“I wish they would send emails like that to my personal email like they used to up until a year ago,” Macklin said when asked what DePaul should have done to communicate the change better to its students.

Dhinesh Raj, a senior who opted in to activate his UPass only after classes began, believes even more efforts should have been made to warn students about the switch.

“It would’ve been nice if professors let their class know, too,” Raj said, after explaining that he found only one email DePaul’s UPass team sent him about the action needed to opt in. “I ended up spending $20 getting to class the first week,” he went on, until he found the form to opt in and activate his UPass.

In an attempt to understand why DePaul’s administration may have made the decision to change UPass activation, I looked into Autumn 2021 term policies made by other Chicago schools partnering with the CTA UPass program, but these findings further muddled my comprehension.

The University of Chicago’s website states that its administration requires all full-time students to pay the UPass fee regardless of use, and there is no option to opt out — as per “a CTA/U-Pass policy.” The websites of the School of the Art Institute of Chicago, the Illinois Institute of Technology, Chicago State University and DePaul, however, made no mention of this CTA UPass policy.

Interestingly, an ordinance passed by CTA’s Chicago Transit Board on Aug. 19, 2020 states that the CTA offered more “flexible U-Pass contract terms” to schools partnering with CTA for the UPass program, which allowed the schools to “pay the daily fee only for selected full-time students,” only lasting through the conclusion of the Summer 2021 academic term.

Throughout the 2020-2021 academic year, however, students at DePaul were still automatically enrolled in UPass, meaning a refund of the $105 per quarter UPass fee was still only offered if the student chose to opt out of the UPass. It is unclear whether the cessation of the CTA’s pandemic ordinance affected DePaul’s decision to make Autumn 2021 term opt in for full-time students.

Alas, as the deadline to opt in for UPass comes to a close, many of us will have to face the reality of spending excess money to travel to classes, work and more for the time being, and hope to remember to opt in for next quarter.

But unless a change is made, I fear many more students will continue to search their pockets anxiously for dollar bills and quarters when boarding their busses and trains.