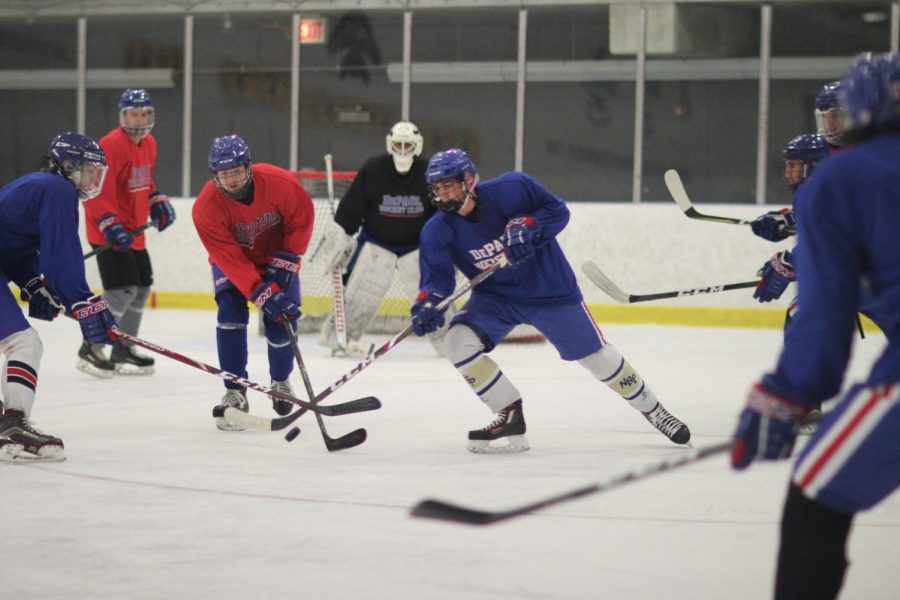 Players scrap over the puck during their scrimmage on Friday, Sept 24.

Amongst the many challenges that college athletes faced during the bulk of the Covid-19 pandemic, the unique struggles of club teams were included. DePaul’s Hockey Club players faced an abrupt stop to their season in February 2020 after a loss in the playoffs, and were unable to play another game until earlier this month, over a year after the fact. During that time, captains took it upon themselves to secure funding and prop up the program so seniors could have their deserved last season.

Jake Camp, Asher Motew and John Bolger are the captains of the team and president, vice president and treasurer of the board, respectively. When they fell to Concordia University Winsconsin on Feb. 16, 2020 in the first round of the Northern Collegiate Hockey League playoffs, they naturally assumed they’d be back on the ice in the fall. But school and ice rinks shut down during the start of the Covid-19 pandemic.

“We’re the head of the team right here, so we weren’t gonna let the program down,” Bolger told The DePaulia. “We had to stick with it because if we left, then it would have gone to nothing.”

Their first games took place on Sept. 17 and 18 in Kentucky, where they lost 5-0 and won 5-4. In the second game, they made a comeback after being down two points.

“… All the stuff we had to go through just immediately is all worth it when you get to be with the [team],” Motew said.

Motew, Camp and Bolger operated the team over the course of the pandemic, working on fundraising and logistics to prepare the team for the season return. According to Motew, the team raised around $25,000 for the team through community donations.

This year the team welcomed 12 incoming freshmen, a hopeful rebound from the prolonged break. This is a promising start to the season, with a large roster and four coaches — for a team that is trying to restart their program.

“It was kind of hard just keeping the motivation up because there were no games, so a lot of kids just didn’t want to come out,” Bolger said.

Now that the team is back on the ice, it will take fan’s support to encourage the team to continue their success. Games take place at Johnny’s Ice House West in East Garfield Park near the United Center.

“When we were at Kentucky, they [had] one hockey team there too, and the fans that they bring out for their games is unbelievable,” Camp said. “They get hundreds and hundreds of fans. They’re packing the rink, they’re chanting — it’s crazy.”

The team hopes to recreate that same excitement at DePaul. With games on Friday nights and Saturday afternoons, they are hopeful more fans will come out.

“There’s passion on this team that I don’t know if people realize hasn’t been there in a little bit, but it’s here.” Motew said.

Although their game against Northern Michigan was canceled last Friday due to a Covid-19 outbreak on the opposing team, they took advantage of the ice time by playing a scrimmage. The team hit the ice with high energy, making it seem like an official game after all.

The team captains said their time on the team extends beyond playing the game of hockey, from learning valuable lessons through organizing the program to forming lifelong relationships with their teammates.

“This team’s our everything,” Motew said. “We talk every single day and we’ve butt heads our fair share of time, [but] we work really well together. We all balance each other out. It’s something that you can’t really put into words sometimes.”

With 26 games left leading up to playoffs, the team is confident in their ability to win against quality competitors and make up for lost time.