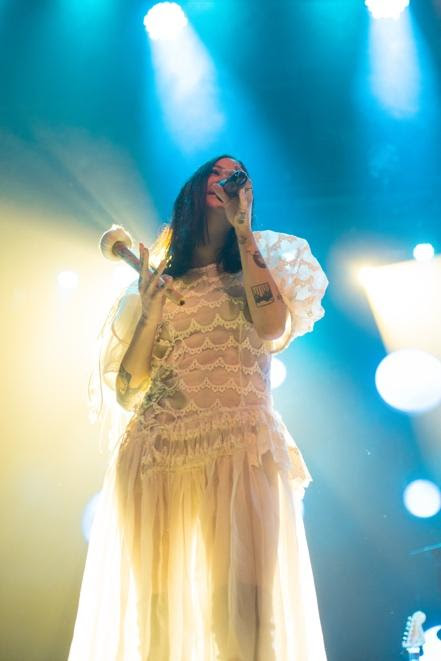 While success is defined by the individual, certain accomplishments are impossible to deny. Putting out a critically acclaimed album, writing a New York Times Best Seller and selling out tour stops seems impossible. Well, it just so happens that Michelle Zauner has done all three, and then some.

The musician, writer, director and author fronts the indie-rock band Japanese Breakfast, who this past week played two nights to a sold-out crowd at Thalia Hall. With live music making its highly anticipated return to Chicago this summer, and now in full swing, the energy throughout the building was unlike anything felt before.

Up two flights of stairs, blue lights flood the ballroom of Thalia Hall – the room already packing in fans ready to stand at the barricade for a few hours to hold their spot. Masks remain on and vaccination cards are matched with a photo ID at the door, yet it feels as if the past two years never happened.

Impressively, the band had drawn a wide age-range to their show;, even on a Wednesday night. With that said, the strong fanbase was identified through their movement to the pre-show playlist, bouncing their heads to Clairo’s “Bags.”

Following an hour of wait-time, lights dimmed and the 88 Rising endorsed Luna Li made her way to the stage. Rising quickly with her recent psychedelic lockdown EP, Li took immediate ownership of the stage. Rare with young performers, Li made ample conversation with the audience throughout the night, explaining her music, discussing how she obtained a 5-year-old’s butterfly guitar on Facebook Marketplace, and reminding the growing audience of her name.

The 24-year-old Toronto native expressed her gratitude to Zauner, as she had been a fan of Japanese Breakfast for years; feeling represented as an Asian American Pacific Islander musician in the indie scene through their music and success. Li is one to watch in the future; making music heavily influenced by Tame Impala, inspired to pursue a multi-instrumentalist mentality that is bound to propel her onto Spotify playlists and a long career.

Her unteachable stage presence and impressive musicality kept her audience’s attention throughout her set; phones only being used to take videos to re-watch later. Unique to Li, mid-way through the set she left time to loop a Tame inspired track made during lockdown, then playing the violin and “floating away” for a few minutes. “Afterglow” and “Cherry Pit” were stand-out songs in her set, and are destined to be on DePaul student’s fall playlists soon enough.

As 9:30pm rolled around, lights dimmed once again, this time for the highly anticipated Japanese Breakfast. Opening with a bang, Zauner made her way to the stage with a mallet in hand, crashing the gong next to her for “Paprika” off their recent album “Jubilee.” She continued to rule the stage, holding the attention of the audience with every step she took. As she moved throughout the night, her musical ability was showcased and highlighted with every song choice.

Unique to the Wednesday night show in Chicago, due to the request from a fan on Twitter earlier that day, the band played “Heft” from their 2016 record “Psychopomp.” Though that was not the only special interaction of the night, as signs were read out from the crowd and jokes were made with those in the front row. Zauner’s enthusiasm carried the energy of the night, discussing backstories of songs and random thoughts.

The band has a hefty discography and very well could have played all original music for their set, yet towards the two-thirds mark of the show a Dolly Parton piano cover of “Here You Come Again” uplifted the crowd into a joyous uproar, emphasizing the feelings of being back in a crowd.

Ending the show with “Everybody Wants to Love You,” it was evident that not only have the members of Japanese Breakfast been itching to return to the stage, but the crew members and staff of the venue, as well as the fans and those who were brought to the show by significant others have been waiting for this night just as long.

That fact was highlighted to an extreme following the end of “Everybody Wants to Love You,” with lights dimming and the show coming to a close. The chants for encore rang throughout the room for a few minutes, with only a few people leaving from the balcony to beat traffic. Soon enough, Zauner made her way back to center stage, alone with a guitar in hand.

She began to quietly play “Posing for Cars,” and the room fell silent; a testament to the control she has on her audience. As band members joined her one by one, the ballad became an anthem, reaching the back row just the same as the front. Closing the show with their last song, “Driving Woman,” off their 2017 record “Soft Sounds from Another Planet,” the band thanked everyone for their support, their strength, and their unity.