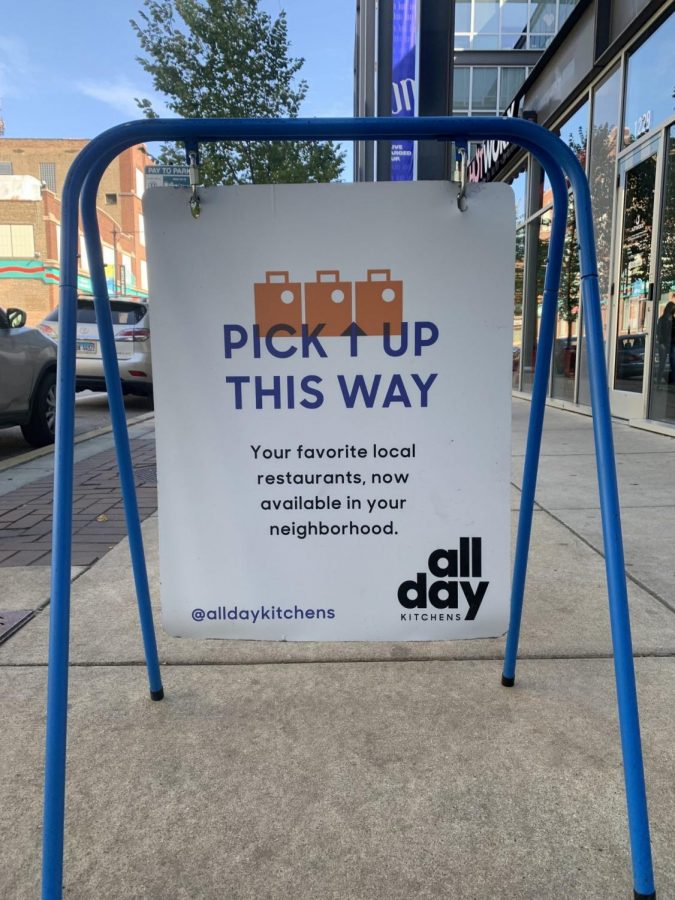 Coming from all different walks of life, no two college students are going to have the same interests, beliefs or tastes.

Ultimately though, we all must eat.

According to the USDA, the average college-age student spends between $225-$400 on food each month, depending on their spending habits. With how far food service technology has advanced, all it takes is one tap to get a local dish dropped at the front door, or ready and waiting when a student needs that midnight carry-out pizza.

Unfortunately, the economic spiral many restaurants experienced during the Covid-19 pandemic has led to widespread shutdowns and closings. Over 110,000 eating and drinking establishments closed temporarily or permanently in 2020, per Fortune Magazine, including at least seven in Lincoln Park.

So, countless restaurants in Chicago and beyond were forced to do what we’ve all done during the pandemic —adapt.

One way they’ve gone about that is through partnering with companies like All Day Kitchens, a distributed restaurant platform that works to offer services to local restaurants such as Cheesie’s and Devil Dawgs to expand their menus to customers in new neighborhoods.

All Day works directly with local and Chicago-wide partnered restaurants to extend their reach beyond the brick-and-mortar establishment, minus the burdens that the standard “ghost kitchen” saddles restaurant owners with.

Ghost kitchens, also called virtual, dark or cloud kitchens, are a variation on the typical brick-and-mortar restaurant. They typically don’t have dining amenities like tables and chairs or a waitstaff, instead subsisting entirely on pickup and delivery.

Restaurants that expand in this fashion face problems that have existed since the advent of delivery and takeout — managing an online image, having a restaurant with no or limited face-to-face interaction and incorporating third-party companies like DoorDash and Uber Eats into the distribution processes.

Fortunately, it is in these areas where All Day, who have a location in the shadow of DePaul’s Lincoln Park campus at 1231 W. Fullerton, hopes to thrive by easing their restaurant partners burdens.

“It’s the first of its kind,” All Day General Manager Sam Wampler said, “We view it as a win-win for our partners, pay them out once a week, allow our partners to get greater penetration in Chicago and beyond.”

They are not just getting involved in the community by working with local restaurants, employing both current and former DePaul students.

“We just hired three brand ambassadors from DePaul, and we’re really excited to get more involved with the DePaul campus,” Wampler said.

All Day Kitchens, founded as Virtual Kitchen Co. in 2018, was based solely in San Francisco until earlier this year, when they announced and set in motion plans to expand to Chicago, to great success.

As Business Insider puts it, All Day “is putting a fine-dining spin on delivery only meals.”

Chicago isn’t their only target for growth, with the company also planning expansions to other California markets, Texas and beyond.

Building in Chicago first was not an accident.

“I know we have the best restaurants in the country, we’ve been up [in revenue] pretty much every single week since we’ve been in Chicago,”  Wampler said.

During a pandemic where dine-in options are limited, delivery and carryout options are more prevalent. All Day workers receive orders directly from their partner restaurants, finish preparing them, then hand them off for delivery or pick up from their location.

“We’ve never lost a partner in Chicago and have great relationships with them,” Wampler said. “That’s something that’s been hard with delivery and ghost kitchens because they don’t get transparency and get saddled with costs.”

Avoiding those costs is key to expanding restaurants’ reach across Chicago and making them more available to DePaul students.

“We give the ability to expand into new locations without taking on any material cost,” Wampler said, “It typically takes between $500,000 and $1 million to build, so it’s an incredible opportunity to make positive cash flow on a daily basis with us.”

Any opportunity to have access to affordable food around the city appeals to customers, particularly college students.

Having somewhere nearby acting as a conduit between DePaul students, restaurants in Lincoln Park and beyond could spare many the trouble of finding just what they want to eat.

“I’d definitely be interested in trying it at least once,” sophomore Chelsea Maldonado Courtney said.

One of All Day’s locations being close to the Lincoln Park campus, is not the only way they are interacting with the DePaul community. All Day recently held a sampling event at the nearby Ion building, highlighting local restaurants to a multitude of student residents.

As the demand for quality delivery and takeout grows at DePaul and beyond, the importance of somewhere like All Day can only increase.

“Consumers want to pick up and want delivery,” Wampler said, “They don’t dine out as much as they used to, we all understand.”