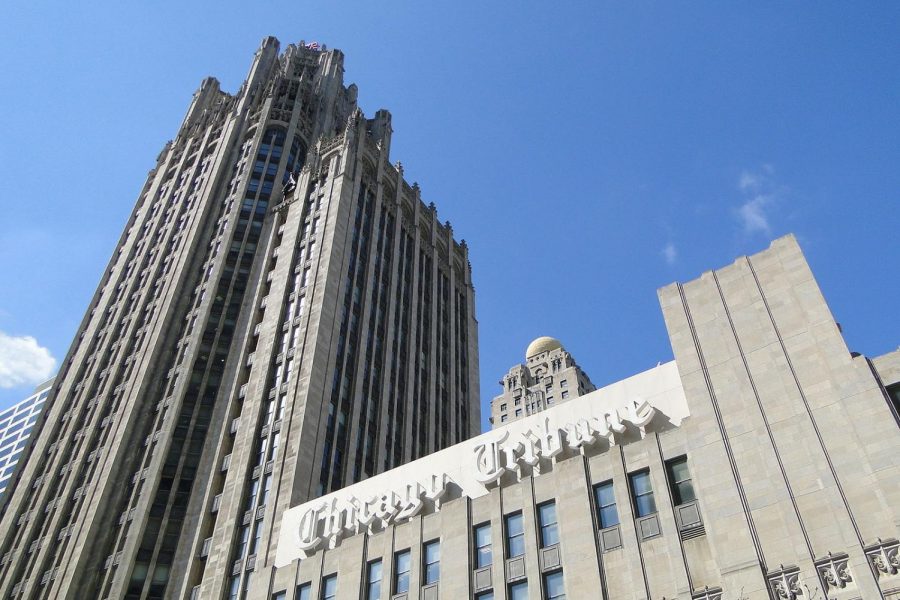 The Tribune Tower. Eric Zorn is one of several journalists who left the Tribune following its buyout.

Opinion pieces reflect the views of the writer(s) not The DePaulia as a whole.

Correction: any instance of murder replaced or cut out to reflect official legal rulings on the respective cases

The panel is co-sponsored by the school’s Society for Professional Journalists (SPJ) and Center for Journalism Integrity and Excellence (CJIE). As journalism students of color at DePaul, we are greatly disappointed in these organizations for selecting Zorn to guest speak just months after Toledo’s slaying.

It is inappropriate for Zorn to speak at DePaul, which prides itself on diversity and social justice. Given the magnitude of protests against police brutality in recent years, this decision is incredibly out of touch.

SPJ advised students to attend the in-person panel and publicly voice their concerns to Zorn himself.

It is insensitive and intimidating to expect students of color to confront Zorn at the in-person event. This decision puts BIPOC students in an uncomfortable position as they may be apprehensive to approach the predominantly white panelists with their concerns.

DePaul’s journalism department needs to rethink their selection and drop Zorn from the panel. Ultimately, this decision to invite Zorn should not have been made.

This also highlights the need for greater diversity in DePaul’s journalism department, as the program has predominantly white professors. If the school hired more diverse journalism professors, they could have been consulted prior to selecting Zorn and this situation may have been avoided.

DePaul’s lack of diversity in the journalism program is not accidental. There are a plethora of journalists of color in the city and nationwide.

We understand that people can have their own opinions; however, inviting someone to DePaul who has made publicly racist sentiments places students of color at risk. Chicago is the third largest city in the nation with a large journalism industry. DePaul could have selected any other journalist who has not offended an entire community.

Prior to his Toledo column, Zorn further showed his racial bias when discussing the cases of Kyle Rittenhouse and George Zimmerman in another opinion piece. Rittenhouse killed two people during street protests in Kenosha, Wisconsin in August 2020. Zimmerman fatally shot 17-year-old Trayvon Martin in 2012. Both Rittenhouse and Zimmerman claimed they were acting out of self-defense.

“Zimmerman was acquitted at trial in 2013, and, I believe, rightly so,” Zorn wrote in his Chicago Tribune column.

“The timeline of events strongly suggests that Zimmerman was not officiously chasing Martin through a subdivision that night but waiting around for police to arrive when Martin, furious at the thought he was being racially profiled, doubled back to attack Zimmerman with his fists,” Zorn added. “As the jury found, Zimmerman drew his gun and fired in fear because Martin was getting the better of him in the fight.”

In addition to defending Zimmerman’s overt racial profiling and murder of a 17-year-old child, he expressed similar feelings about Rittenhouse in another opinion column.

“Whether you think Rittenhouse is a hero for helping guard against a repeat of the vandalism the night before, or if you think he’s a reckless wannabe cop who had no business in Kenosha, you’ve got to concede that, at that moment, he was probably terrified,” Zorn wrote.

Zorn said the video evidence proves Rittenhouse acted out of self-defense. However, when voicing his unprompted opinion regarding the police murder of Adam Toledo, his views differed.

In his column, “Let’s wait before turning slain 13-year-old Adam Toledo into a martyr,” Zorn said that Toledo may not be as innocent as everyone makes him seem.

Describing Toledo in this way is unsettling because no matter what decisions he made in life, whether good or bad, he was ultimately a child. Treating him with the same scrutiny as an adult is an insensitive take that nobody asked for. Zorn also contributes to racist ideologies, where youth of color are often treated like adults whereas their white counterparts are described as innocent.

“He was not a ‘baby,’” Zorn wrote. “A 13-year-old pointing a gun, if that’s what he did, is as dangerous as a 23- or 33-year-old, maybe even more dangerous given what we know about the lack of judgment and impulse control in adolescents.”

Zorn grants Rittenhouse and Zimmerman, who are both white, the benefit of the doubt, stating they acted out of self-defense.

Zorn does not grant that benefit to Toledo and children like him, stating that age does not represent how innocent or harmless an individual is.

Children are innocent, and they should be protected, even posthumously. A police officer should have enough training to avoid murdering a child, even in the name of self-defense.

DePaul does not have a policy on hate speech, and they are allowed to invite whoever they want to speak on campus. We believe that hate speech should not be allowed on campus because it can put students at risk of vulnerable situations.

Inviting Zorn to speak violates what St. Vincent DePaul stood for and what his legacy continues to represent. If the university and its journalism department genuinely cared for its students, especially its marginalized students, they would make the Vincentian decision to drop Zorn from next week’s panel and hire more faculty of color.