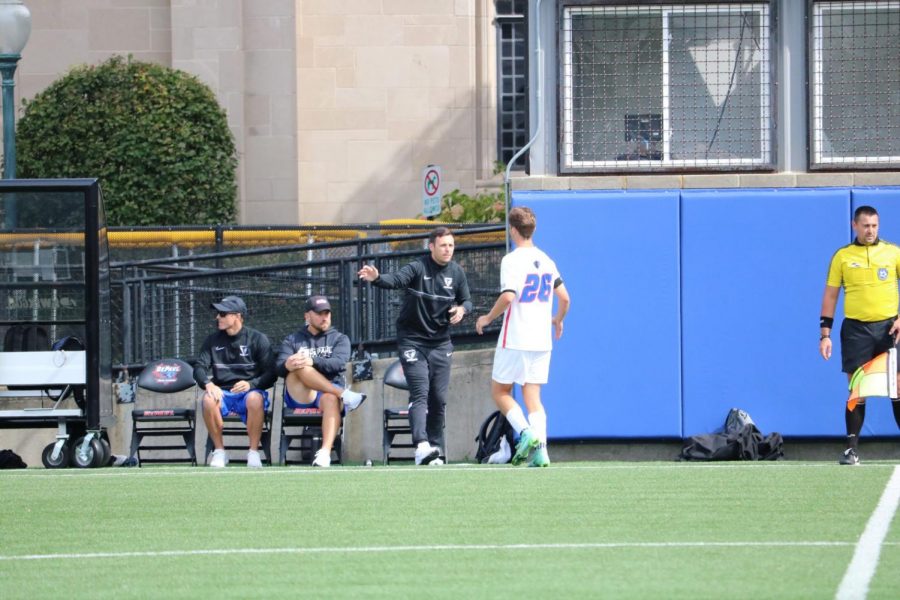 DePaul men's soccer coach Mark Plotkin talking to a player during their game against UConn on Sept 25.

Whistles, screaming crowds, flags thrown up by referees, teammates yelling; it can be overwhelming to be an athlete. But the one aspect that can mediate or worsen a stressful situation is the coach.

In July, Justin Hebert and Aubrey Newland, graduate students at California State University Chico, released a research article confirming overly aggressive coaching styles can be harmful not only to athletes, but also to the winning record of coaches. Hebert and Newland suggest a nurturing coaching style is more effective.

“But, the research shows that isn’t usually the case. Most athletes respond better to a more nurturing style of communication. A more symbiotic relationship where the coach and the athlete are sort of equals.”

For Michele O’Brien, head coach of women’s soccer at DePaul, being genuine and understanding with athletes is crucial.

“Being a human and not just a coach in [one-on-one] moments is super important,” she said. “That can’t be something that’s fake, that has to be genuine.”

The study claims coaching can even theoretically impact the motivation of an athlete, which is known as self-determination theory. Intrinsic motivation—the motivation that represents the desire and joy of playing a sport—and the fulfillment of competence, individuality and strong relationships are all necessary for an athlete to want to continue playing a sport.

“When those three needs are not being met our intrinsic motivation to play is crushed. It goes down severely,” Hebert said. “And the research shows that the people who are less intrinsically motivated to participate in an activity are going to give it less effort. They’re probably going to perform less. They’re not going to want to go out of their way to do something for their coach or a fellow athlete. They’re not going to spend the extra hours in the gym because they don’t want to be there anymore.”

Hebert said his research found the best way to fulfill an athlete’s competence, autonomy and relatedness is by communicating and building a relationship with the athlete. Mark Plotkin, head coach of men’s soccer at DePaul, agreed coaches should build relationships with their athletes.

“Taking time to be with the athletes [is important], especially before we start,” Plotkin said. “Hanging out with the athletes before practice starts, those are good moments to chit-chat a little bit, even when they’re warming up and stretching you can walk around and joke around with them a little bit. I always find that’s our time to really humanize ourselves because as soon as practice starts we’re coaching and we’re teaching so we have to be pretty dialed in.

“We even have one-on-one meetings to check in with them and see how they’re doing, how classes are going, how they’re doing in their job search or their internship search world, how soccer’s going. We try to talk about everything, not just soccer. We always tell them when we’re recruiting, we’re not just your soccer coaches, we’re here to help you become productive members of society once you leave this place and have a positive impact on the world.”

If a coach has a negative relationship with their athletes, Hebert claims there isn’t an immediate fix a coach can implement into their coaching style.

“It’s not necessarily a switch that you can flip to go from condescending to nurturing overnight,” Hebert said. “Relationships aren’t built overnight. If somebody treats you poorly for weeks or months or years and then all of the sudden the next day they’re super nice to you [you won’t automatically believe they’re your friend]. It doesn’t work that way, it takes a long time to build up a relationship. The best way to [build relationships] is a little bit at a time.”

O’Brien said she tries to find a balance between being patient and being stern with her athletes when she is forming a relationship with them.

“For me it’s finding the balance of being patient but not too patient because at the end of the day you have to get results and you have to win games,” O’Brien said. However, you have to be patient with the process.”

Plotkin concurred, acknowledging the importance of players being known as individuals, not just athletes, especially at the collegiate level.

“A coach I used to work for told me, and it kind of resonated with me: they don’t care how much you know until they know how much you care,” he said. Plotkin said caring about your athletes is one of the most important parts of coaching.