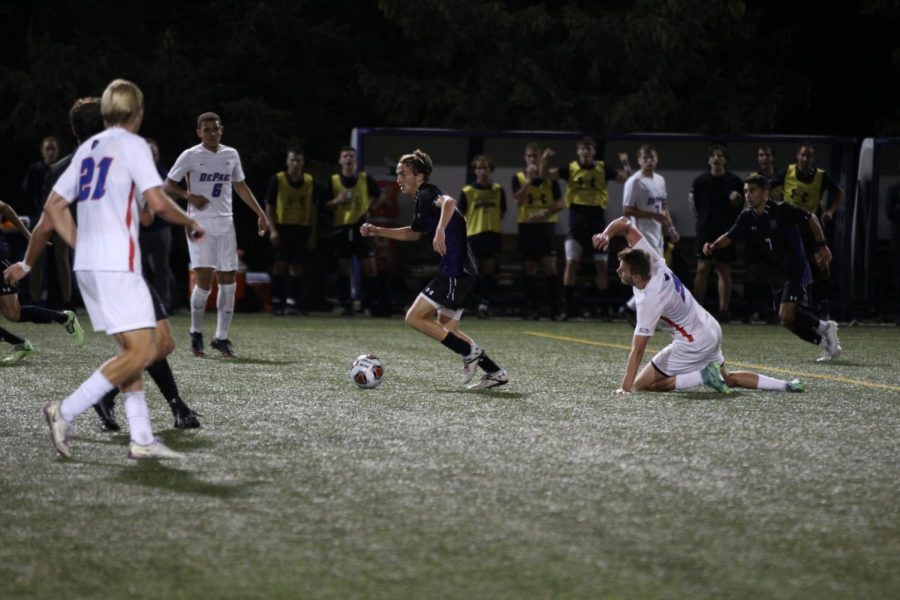 EVANSTON, IL — A rough night in Evanston in the final non-conference match of the season saw the men’s soccer team fall to Northwestern 2-0 on Wednesday night. Spencer Farina of Northwestern scored off a set piece to give the Wildcats the lead in the 15th minute, and Northwestern controlled the pace from there on. A goal in the 54th minute put the game to rest as Northwestern cruised to the 2-0 victory. Vicente Castro assisted on both goals for NU.

DePaul was coming off of a 5-1 record through their past 6 games, where they didn’t allow more than 1 goal in any. It was also the first game of the season without a shot on target for the Blue Demons. They turn around to face No. 1 Georgetown on Saturday in Washington D.C.

“I told the guys last night after the game that ‘let’s just look forward,’” head coach Mark Plotkin said. “If you came to watch our previous seven games and then came out to watch that game, you would have asked ‘who is this DePaul team?’”

Northwestern dominated possession for much of the first half, and when on defense, challenged DePaul to string multiple passes together.

“It’s always about the different matchups that you play, with UConn it was a little bit more open, so there was kind of more space for us, whereas Northwestern sat off us a little bit more, which challenged us to then find passes instead of smaller areas,” Plotkin said. “I think there were moments where we were switched on and you saw us going at pace and generating crosses and touches in the box like we do, and in other games, we put those away.”

10 minutes into the second half, Castro found Justin Weiss at the front of the penalty area, who let the ball bounce twice before turning and delivering a highlight-reel strike past the outstretched arms of DePaul goalkeeper Gandhi Cruz.

“We haven’t seen a goal scored like that on us all year, so credit to [Weiss],” Plotkin said.

The loss snapped a solid streak of results for the Blue Demons, but with a tough conference schedule ahead for the next month, there’s no time to dwell on Wednesday night.

“We told the guys don’t let the highs get too high or let the lows get too low,” Plotkin said. “We had a great win against UConn and we were really excited about it and then you’re going to have losses like against Northwestern and you just got to stay even-keeled.”

Saturday sees DePaul face Georgetown, the 2019 NCAA champions and familiar Big East foe. In the Hoya’s championship season, the Blue Demons gutted out a 0-0 draw, giving the Hoyas one of just four non-wins in their 24-game season.

Two starters in that game for DePaul — forward Jack Richards and midfielder Michael Anderson, now upperclassmen — are excited to get another crack at the No. 1 team in the country.

“Especially [playing away], I know it will be a bit harder but it’s always easy to get up for those games because you have that history and they have that history of being the number one team in the nation,”  Richards said. “So it’s not like a Wednesday night in Northwestern after going to class.”

The Blue Demons are 1-1-3 in their last five meetings with Georgetown, with each meeting being decided by one goal or less. There is no fear in the DePaul team, and there will be no trouble getting excited for Saturday. “It’s easy for us to go to their field this time and give them a challenge,” Anderson said.